Costa’s remarks followed mass shootings over the weekend in El Paso, Texas, and Dayton, Ohio, that killed 31 people and wounded more than 50.

“When will the Senate & President do their jobs and work to protect the American people?” tweeted Costa, a Fresno Democrat.

Enough. How many more lives must be lost before the senate takes action? I voted for common-sense gun legislation to help protect lives and it’s been sitting on McConnel’s desk for months. When will the Senate & President do their jobs and work to protect the American people?

Costa followed with an official statement released by his office.

“Enough is enough. How many more lives must be lost before the Senate takes action? Thoughts and prayers are good, but they are not enough,” Costa said. “Earlier this year, I voted in the House to pass common-sense gun legislation that would help protect lives and it’s been sitting on Mitch McConnell’s desk for months. But more needs to be done. When will the Senate and the President do their jobs and work to protect the American people? Racism has no place in our country, and we must do everything possible to address its causes.”

An examination of social media accounts Monday for the five members of the San Joaquin Valley’s congressional delegation showed only one Republican, House Minority Leader Kevin McCarthy weighing in on the mass-killing spree. In addition to those killed and injured in El Paso and Dayton, a gunman killed three people, including two children, and wounded 13 others July 28 at the Gilroy Garlic Festival.

However, McCarthy focused him remarks on the hate aspect, not on gun violence. “No one in this country should fear going shopping or going out on a Saturday night. These monsters acted out of pure hate—we must not allow this evil to ever happen again,” he tweeted.

No one in this country should fear going shopping or going out on a Saturday night. These monsters acted out of pure hate—we must not allow this evil to ever happen again.

All Americans lift up the families who are mourning, & we thank the first responders who acted so quickly. pic.twitter.com/fjugpRw5jg

McCarthy went on to link mass shootings to video games in an interview on Fox News.

No comments were found on the Twitter and Facebook accounts of Reps. Devin Nunes (R-Tulare) and Tom McClintock (R-Elk Grove). Nor did their offices release statements on the mass shootings.

Rep. TJ Cox of Fresno, a Democrat, tweeted that “the American public deserves better.” Another Democrat, Josh Harder of Turlock, echoed Costa’s views with his tweet.

I’m deeply saddened and disappointed by the continued senseless acts of gun violence in our country. Congress has taken its first step in 10 years on this issue by voting to support universal background checks, but the American public deserves better. https://t.co/VpjNqlhlnH

We have to do better and it’s time for the Senate to do its job and take up the bills we’ve already passed in the House and keep our families safe. And it’s up to all of us to stand up to hatred wherever we see it.

President Donald Trump condemned the weekend shootings as crimes “against all humanity.” He additionally called for bipartisan cooperation on legislation requiring “strong background checks” as a means of ending the U.S. gun violence epidemic. However, he didn’t offer details about what that legislation might look like.

Sen. McConnell said in a tweet that he was “sickened” by “another mass murder” but did not bring up legislation intended to reduce gun violence.

Sickening to learn this morning of another mass murder in Dayton, Ohio overnight. Two horrifying acts of violence in less than 24 hours. We stand with law enforcement as they continue working to keep Americans safe and bring justice. 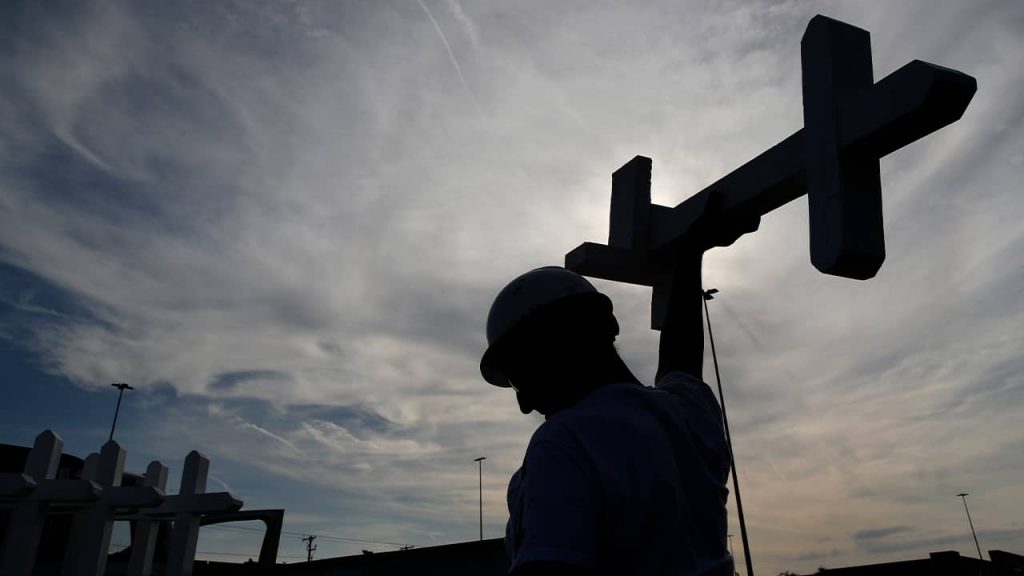 Greg Zanis prepares crosses to place at a makeshift memorial for victims of a mass shooting at a shopping complex Monday, Aug. 5, 2019, in El Paso, Texas. (AP Photo/John Locher)