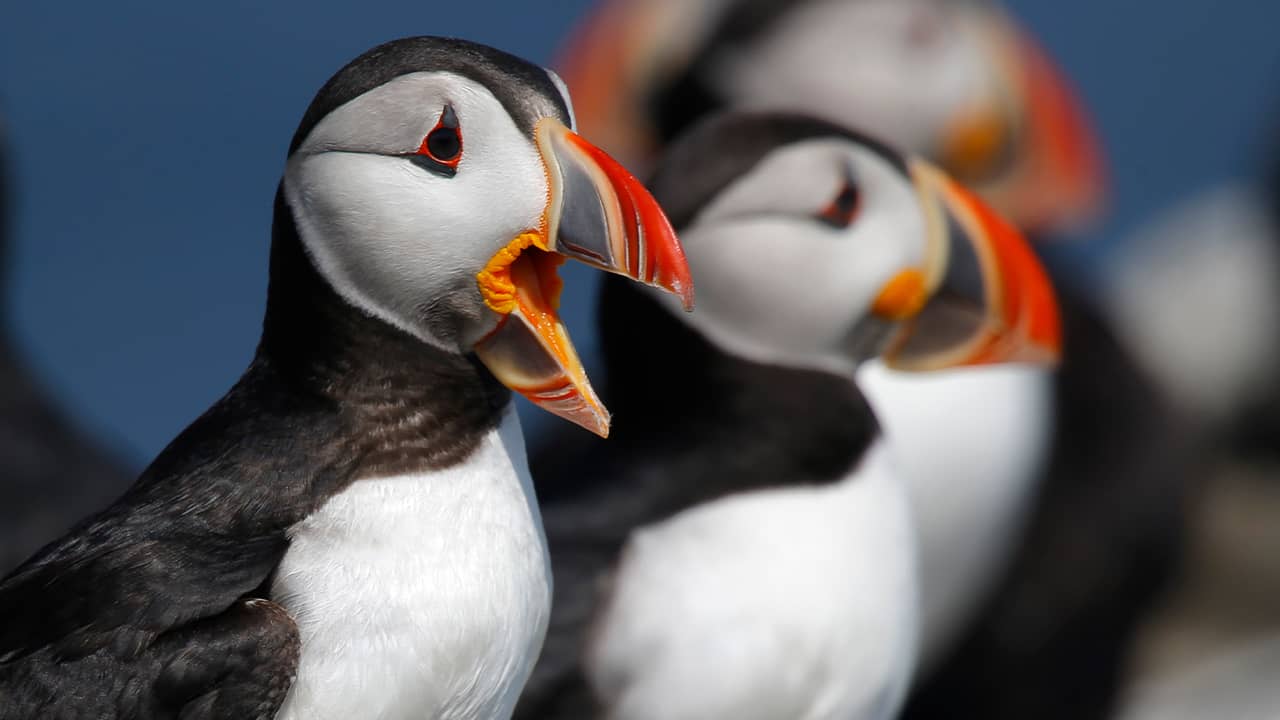 PORTLAND, Maine — One of the most beloved birds in Maine is having one of its most productive seasons for mating pairs in years on remote islands off the state’s coast.
Atlantic puffins, with their colorful beaks and waddling walks, are one of New England’s best recognized seabirds. Maine is the only state in the U.S. where the birds breed, and they do so on hard-to-reach places like Seal Island National Wildlife Refuge in the Gulf of Maine, a body of water that touches New England and Canada.
The birds are well on their way to setting a record for the number of breeding pairs, said National Audubon Society scientist Stephen Kress, who has studied the birds for years. Kress said nearly 750 pairs nested on Seal Island and Eastern Egg Rock in 2018, and this year’s number will likely be higher.
The birds are thriving due to multiple factors, including an abundance of the type of fish they’re best suited to eat, such as young haddock and hake and herring. In some previous years, the birds have suffered because those fish were less available, replaced by fish that are more difficult for them to digest. The appearance of the more ideal fish could have to do with the Gulf of Maine running somewhat cool recently.

A lot of puffins also laid eggs slightly early this year, which suggests the parents are in good condition, Kress said. He cautioned that the birds’ breeding success has fluctuated in the past, so this year’s good news might not be evidence of a long-term trend.

The birds can suffer when waters warm and squid and butterfish, which aren’t good puffin food, dominate local waters, Major said. But the Gulf of Maine is a little cooler than last year, and good prey has been abundant, she said. The island is around its long-term average of 56% of eggs producing a successful chick, Major said.
“There were lots of puffins around this year,” she said. “This year it seems more stable.”
The puffins of Seal Island National Wildlife Refuge are the subject of a popular “puffin cam” hosted by Explore.org, said Keenan Yakola, Seal Island supervisor for Audubon, who helps maintain the camera.
Environmental groups have made the case recently that Northeast Canyons and Seamounts Marine National Monument, which former President Barack Obama designated in 2016, is important to the survival of the puffins. Fishermen have sued to overturn the creation of the monument, which they believe creates an unfair hardship in the form of fishing restrictions.
But Audubon and other environmental groups have said the monument, which creates a protected area off New England, provides birds with a reliable food source.
“Having that area that they are known to use in a protected condition is certainly a plus for the puffins,” said Peter Shelley, senior counsel with Conservation Law Foundation.