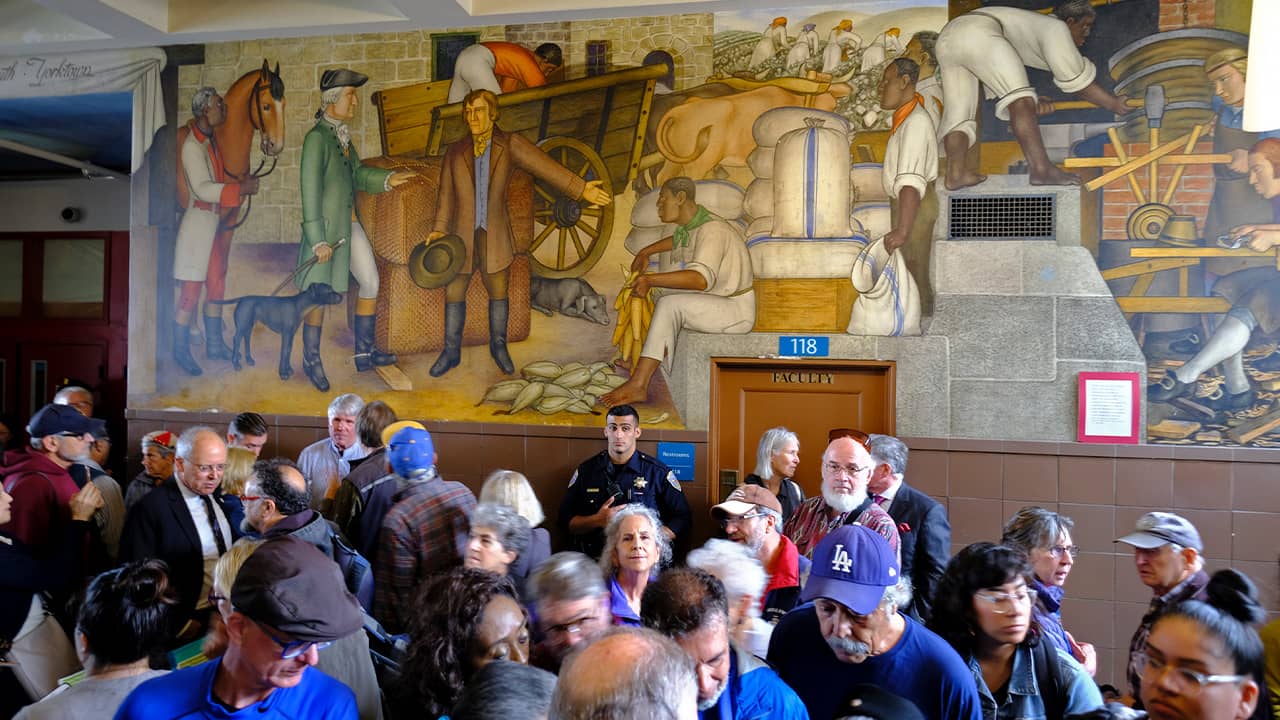 SAN FRANCISCO — Over 100 people packed the lobby of a San Francisco public high school to view a controversial mural criticized as racist and degrading for its depiction of black and Native American people.
Officials allowed visitors to see the “Life of Washington” mural for two hours on Thursday after the San Francisco School Board voted in June to paint over the 83-year-old fresco. Since then, there has been much pushback about the decision, including an effort to include a measure on the 2020 ballot to preserve the mural and a protest petition signed by more than 400 academics.
The public viewing opportunity came in response to multiple requests over the past several months, according to Laura Dudnick, spokesperson for the San Francisco Unified School District.
Most of those at the viewing were retirees, with a handful of kids on summer vacation with their relatives. Many were alumni of the school, as well as artists and art historians. Some were local and others came in from towns outside San Francisco to glimpse the much-discussed mural.
The vast majority of visitors were steadfastly against destroying the mural. Multiple people milled about the space, handing out flyers detailing the history of the mural and arguments against its destruction.
Roberta McLaughlin, 78, collected signatures on a poster on which she wrote, “Educate Do Not Eradicate” and said she would present it to the school board in an effort to have the members consider their vote.

The school board is under the “misguided notion that this mural fosters inequality and racism,” she said. “I think this mural does the opposite. It shows us how racism is so embedded in our country’s history.”

Amy Anderson, a San Francisco public school teacher who is of Native American descent, also supported the board’s decision. Her son is enrolled at the school, and the two have spoken at length about what she calls the hurtful and stereotypical portrayal of Native Americans.
“Reparations need to happen so the kids know, even though this has been there for 80 years, your voice matters, you can stand up for change and change is the one constant,” Anderson said.
Thinking of the white walls that would be in place of the mural, ripe for new images, gave her hope, she added.
“If this little piece of white supremacy is taken out of a school, painted over, then what’s next?” she said.
Joanne Chow Winship, a former director of San Francisco’s Arts Commission, wiped tears from her eyes as she described how a spontaneous conversation with Anderson that afternoon made her “think twice” about her support of the mural.
“I’m torn. I come from wanting to defend and protect the artist and artist’s work, but I understand and want people to recognize the feeling in the history for them,” Winship said, explaining that she approached the mural with her head and she knew Anderson approached it with her heart. “I stand here and I look around and I’m feeling more of her heart . I’m very moved.”
The two women took a selfie, portions of the mural visible behind them.