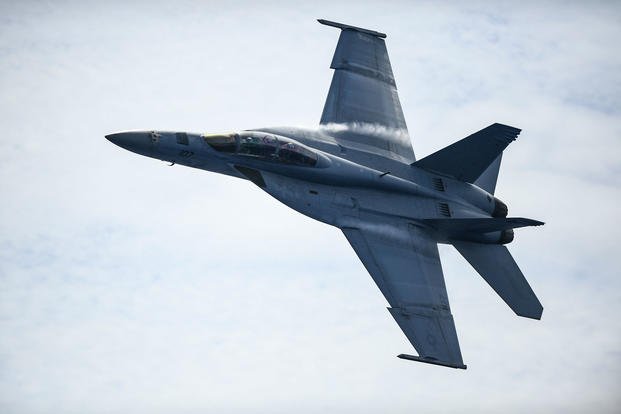 The single-seat jet was assigned to the “Vigilantes” of Strike Fighter Squadron 151 based at Naval Air Station Lemoore.
(Read the latest version of this story at this link.)

Seven on Ground Hurt, No Word on Pilot

Death Valley National Park spokesman Patrick Taylor said seven parks visitors suffered minor injuries in the crash.
There’s no word yet on what happened to the pilot of the F/A-18 Super Hornet, which went down during a training mission Wednesday morning.
The crash occurred near a park area nicknamed Star Wars Canyon where fighter jets practice low-flying maneuvers and tourists often gather to watch.

The verified Twitter account of Naval Air Forces stated that VFA-151 was on a “routine training mission” when the crash occurred.

The warplane went down at 9:50 a.m. during a routine training mission about 60 miles north of Naval Air Weapons Station at China Lake, a remote expanse of the Mojave Desert, said Lt. Cmdr. Lydia Bock, spokeswoman for NAS Lemoore.
The fighter squadron is part of an air group attached to the aircraft carrier USS John C. Stennis.
Navy search and rescue units from Lemoore and China Lake were on the scene.

The aircraft from VFA-151 was on a routine training flight when the mishap occurred. Search and rescue units from @NAWS_CL and NAS Lemoore are on scene. The cause of the mishap is under investigation.

About the Super Hornet

The Super Hornet is a twin-engine warplane designed to fly from either aircraft carriers or ground bases on both air-superiority and ground-attack missions.
China Lake is about 120 miles north of Los Angeles.
A spokesperson for the Inyo County Sheriff’s Office, Carma Roper, told CNN that they were helping to secure the area until the military arrived on the scene.
(Associated Press contributed to this report.)