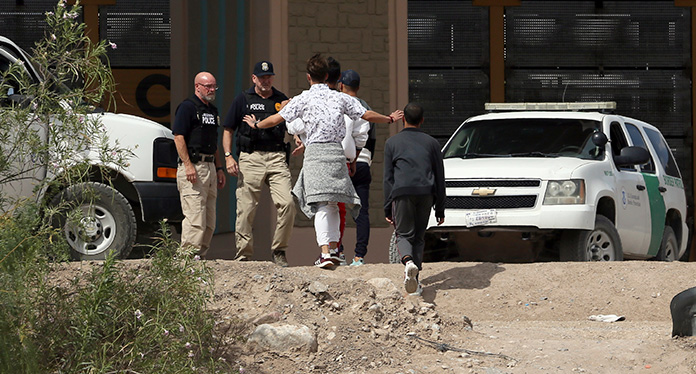 WASHINGTON  — The Trump administration on Monday moved to end asylum protections for most Central American migrants in a major escalation of the president’s battle to tamp down the number of people crossing the U.S.-Mexico border.

But the move by President Donald Trump’s administration was meant to essentially end asylum protections as they now are on the southern border, reversing decades of U.S. policy on how refugees are treated and coming as the government continues to clamp down on migrants and as the treatment of those who made it to the country is heavily criticized as inhumane.
Attorney General William Barr said that the United States is “a generous country but is being completely overwhelmed” by the burdens associated with apprehending and processing hundreds of thousands of migrants at the southern border.
“This rule will decrease forum shopping by economic migrants and those who seek to exploit our asylum system to obtain entry to the United States,” Barr said in a statement.
The policy is almost certain to face a legal challenge. U.S. law allows refugees to request asylum when they arrive at the U.S. regardless of how they did so, but there is an exception for those who have come through a country considered to be “safe.” But the Immigration and Nationality Act, which governs asylum law, is vague on how a country is determined “safe”; it says “pursuant to a bilateral or multilateral agreement.”

Right now, the U.S. has such an agreement, known as a “safe third country,” only with Canada. Under a recent agreement with Mexico, Central American countries were considering a regional compact on the issue, but nothing has been decided. Guatemalan officials were expected in Washington on Monday, but apparently a meeting between Trump and Guatemalan President Jimmy Morales was canceled amid a court challenge in Guatemala over whether the country could agree to a safe third with the U.S.
American Civil Liberties Union attorney Lee Gelernt, who has litigated some of the major challenges to the Trump administration’s immigration policies, said the rule was unlawful.
“The rule, if upheld, would effectively eliminate asylum for those at the southern border,” he said. “But it is patently unlawful.”
The new rule also will apply to the initial asylum screening, known as a “credible fear” interview, at which migrants must prove they have credible fears of returning to their home country. It applies to migrants who are arriving to the U.S., not those who are already in the country.
Trump administration officials say the changes are meant to close the gap between the initial asylum screening that most people pass and the final decision on asylum that most people do not win. But immigrant rights groups, religious leaders and humanitarian groups have said the Republican administration’s policies amount to a cruel and calloused effort to keep immigrants out of the country. Guatemala, Honduras and El Salvador are poor countries suffering from violence.