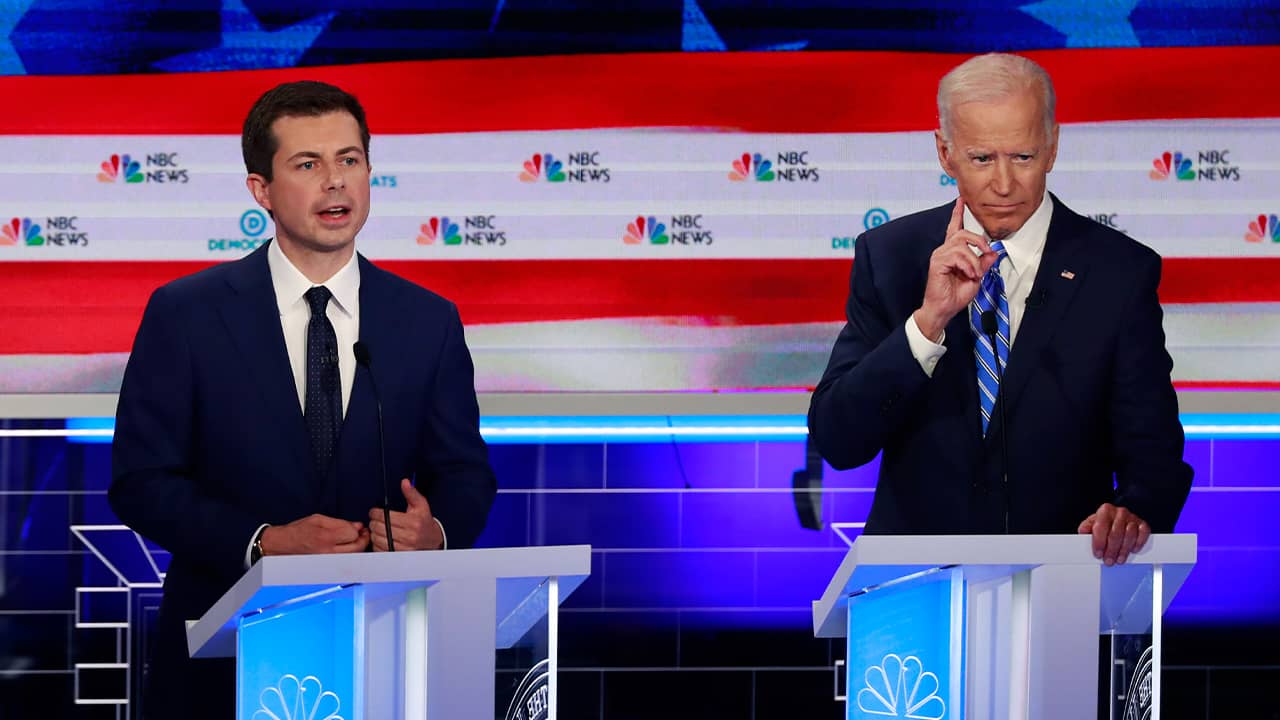 LACONIA, N.H. — Amy McInerney at first saw Joe Biden as Democrats’ best hope to beat President Donald Trump — an experienced politician with the potential to peel off some of Trump’s working-class supporters. Then she heard Pete Buttigieg speak.

“The benefit of some of the older candidates is being able to show that experience,” said Tom Perriello, a former Democratic congressman from Virginia who was elected at age 33. “But newer candidates can sometimes run on the sense that they are more genuinely committed to change having not necessarily been part of the system that people feel has not delivered.”
Democratic voters have long been drawn to calls for generational change. President John F. Kennedy laid the predicate in his 1961 inaugural address when he said that “the torch has been passed to a new generation of Americans.” The last two Democrats to win the White House campaigned in part on the promise of a fresh start — Bill Clinton, whose 1992 win at age 46 made him the first baby boomer president, and Barack Obama, who swept to victory in 2008 at age 47 over 72-year-old John McCain. The 2018 midterms also ushered in a younger generation of Democratic lawmakers, including a historic number of women and minorities who were first-time candidates.

“The wait-your-turn approach to politics has never been particularly effective in Democratic politics,” said Ben LaBolt, a Democratic strategist who worked for Obama’s 2008 campaign.
But for some Democratic voters, the draw of a younger, less experienced candidate is tempered in 2020 by the risks of losing to Trump, a candidate many in the party view as an existential threat to democracy.
“I don’t think the mayor of South Bend should run for president in 2020 when the stakes are so high with Trump,” said Kate Bailey, a 30-year-old health care advocate from Hooksett, New Hampshire. “I would love to see the generational torch be passed. But honestly I don’t feel like this is the best time for a 37-year-old to run for president.”
Biden’s campaign had begun to subtly make a similar case.

“Vice President Biden believes the issues facing our country today aren’t generational challenges, they’re existential challenges,” said Kate Bedingfield, Biden’s deputy campaign manager.
Part of the allure for Democrats of a younger candidate has been the prospect of energizing younger voters. With Obama on the ballot in 2008, nearly 2 million more young people voted in the presidential election.
Yet Biden’s campaign also sees an opportunity to appeal to older Americans, who vote at higher rates. According to the Census Bureau’s Current Population Survey, 71% percent of those age 65 and over voted in the 2016 presidential election, as did 67% of those between the ages of 45-65. Just 46% of Americans under 30 voted.
While younger Democratic voters skew more liberal than older Democrats, the ideological lanes are more scrambled in the presidential campaign. Biden hews to the center, but two of the other oldest candidates in the race are also the most liberal: 77-year-old Bernie Sanders and 70-year-old Elizabeth Warren. During the 2016 Democratic primary, Sanders had broad support from young voters who were drawn to his plans to lower college costs and eliminate student debt.
“It’s not the age of the messenger, it’s the freshness the ideas,” Sanders adviser Jeff Weaver said in an interview with The Associated Press.
Buttigieg, meanwhile, shares some of Biden’s more moderate views, including backing a health care plan that would preserve a private insurance market. So does Beto O’Rourke, the 46-year-old former Texas congressman. But both have called for broad structural changes to the U.S. government, including changing or abolishing the Electoral College and reforming the makeup of the Supreme Court.
“There has to be a new approach and a new way of meeting these challenges or we will not overcome them,” O’Rourke said in an interview.

Some of the enthusiasm for O’Rourke, who narrowly lost the Texas Senate race last fall, has been overtaken by Buttigieg, a gay military veteran.


Biden drew comparisons between young people compelled to action by Trump and the forces that motivated his generation, like the civil rights movement and the Vietnam War.
Buttigieg’s call for a generational handoff in Democratic politics has resonated with Rhu McBee, a 68-year-old from Tilton, New Hampshire. She sat outside a Buttigieg town hall event on Friday holding a loaf of homemade bread decorated with the mayor’s name. She was also wearing an O’Rourke shirt from the Texas primary, but had used tape to turn the word “Beto” into “Pete.”
“I’ve been working since the late ’60s on change and all that. But it’s time for me to hand the torch to someone who can get out of bed in the morning,” McBee said. “More power to the people who are my age or older who are running for this office, but I can’t imagine doing that. I experience every day what it’s like to be 68 and it isn’t the blast 37 was.”

The generational divide between Biden and Buttigieg is indeed striking. Biden was born in the midst of World War II, and is too old to be part of the baby boomer generation. Buttigieg served in Afghanistan after 9/11 and frequently reminds voters he is a millennial. Biden was elected to the Senate a decade before Buttigieg was born.
Biden is clearly sensitive to suggestions that he’s too old to run for president or that he represents a return to the past. During remarks Friday night at a fundraiser for the New Hampshire Young Democrats organization, Biden drew comparisons between young people compelled to action by Trump and the forces that motivated his generation, like the civil rights movement and the Vietnam War.
He put a finer point on the matter the next day, telling voters in Atkinson, New Hampshire: “I don’t want to go back to anything old. Nothing.”
Related Topics:Democratsgenerational polesJoe BidenPete ButtigiegPresident Donald Trumppresidential primarysupporters
Up Next