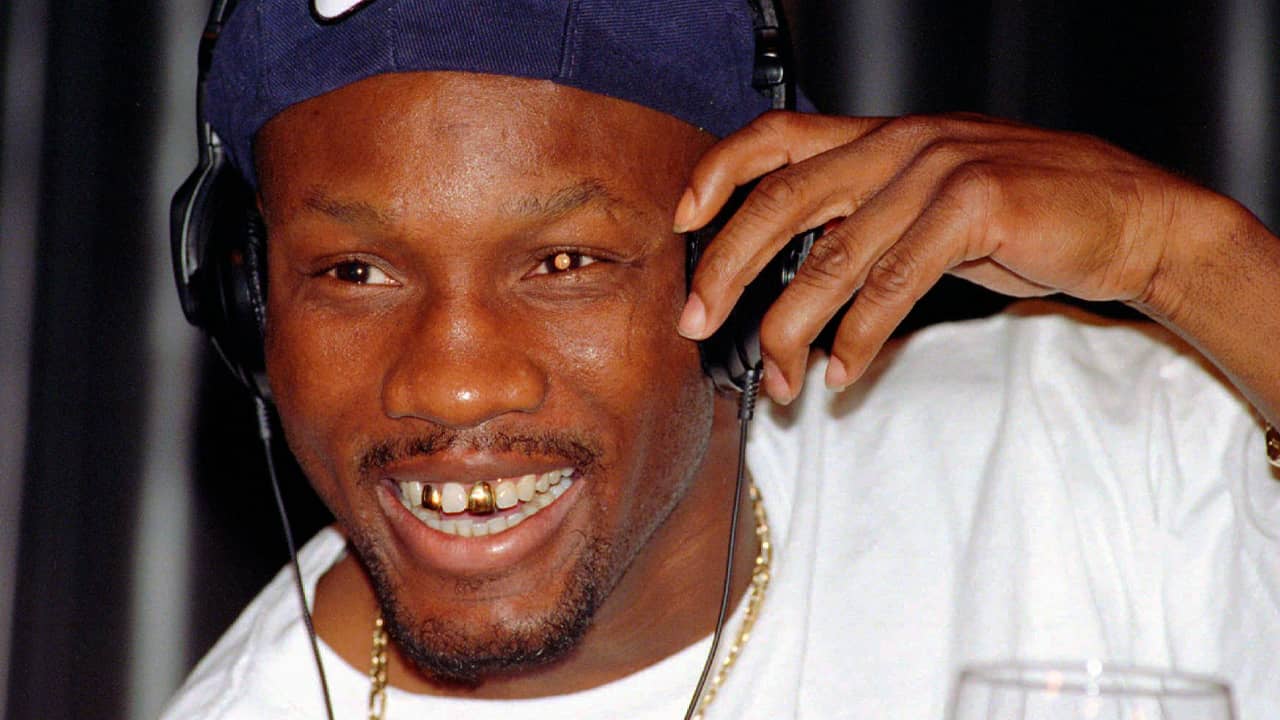 Pernell Whitaker, an Olympic gold medalist and four division champion who was regarded as one of the greatest defensive fighters ever, has died after being hit by a car in Virginia. He was 55.
Police in Virginia Beach said the former fighter was hit by a car Sunday night. The driver of the car remained on the scene, and police said they were investigating the circumstances of the death.
Sweet Pea was Whitaker’s nickname, and it fit perfectly. He was a master of getting hit and not getting hit back, a southpaw who slipped in and out of the pocket and rarely gave an opponent an opportunity to land a clean shot.
Whitaker won a gold medal at the 1984 Olympics in Los Angeles — one of nine U.S. champions that year — and made his pro debut on national television. He advanced quickly, and was fighting for a major title by his 17th fight, a loss to Jose Luis Ramirez that he would avenge the next year.
But Whitaker was also known as the victim of one of the worst decisions in boxing, a draw that allowed Julio Cesar Chavez to remain unbeaten in their welterweight showdown before a crowd of more than 60,000 at the Alamodome in San Antonio in 1993.
Four years later, Whitaker was on the losing end of another difficult decision against Oscar De La Hoya in Las Vegas, a fight many ringsiders thought he had won.

His Style Was Unique and It Was Effective

“When you see the list of greatest boxing robberies in history they were both No. 1 and No. 2 on the list,” said Kathy Duva, his longtime promoter. “And every list of top 10 fighters of all time he was on, too.”


“When you see the list of greatest boxing robberies in history they were both No. 1 and No. 2 on the list. And every list of top 10 fighters of all time he was on, too.” — Kathy Duva, his longtime promoter
Whitaker was a champion in four weight classes, winning his first one with a 1989 decision over Greg Haugen at lightweight, in a professional career that spanned 17 years. He finished with a record of 40-4-1 and was a first ballot selection into the International Boxing Hall of Fame.
His style was unique and it was effective, a hit-and-don’t-be-hit strategy that was later adopted by a rising young fighter named Floyd Mayweather Jr. Whitaker and Mayweather never met in the ring, but Whitaker did win a decision over Mayweather’s uncle, Roger, in 1987.
Still, it was two controversial decisions — one a draw, the other a loss — that may have defined his career more than anything.
The first came against Chavez, the Mexican great who was unbeaten in 87 fights when he and Whitaker met in a highly anticipated fight in San Antonio.
Whitaker came out in his trademark style, confusing Chavez and frustrating the Mexican champion. Chavez stalked Whitaker throughout the fight, but Whitaker wasn’t there to be found for the most part, and when he traded with Chavez he seemed to get the better of the Mexican. Ringside statistics showed Whitaker landing 311 punches to 220 for Chavez, while throwing 153 more punches.
But when the decision came down, it was a draw that was roundly criticized throughout boxing. 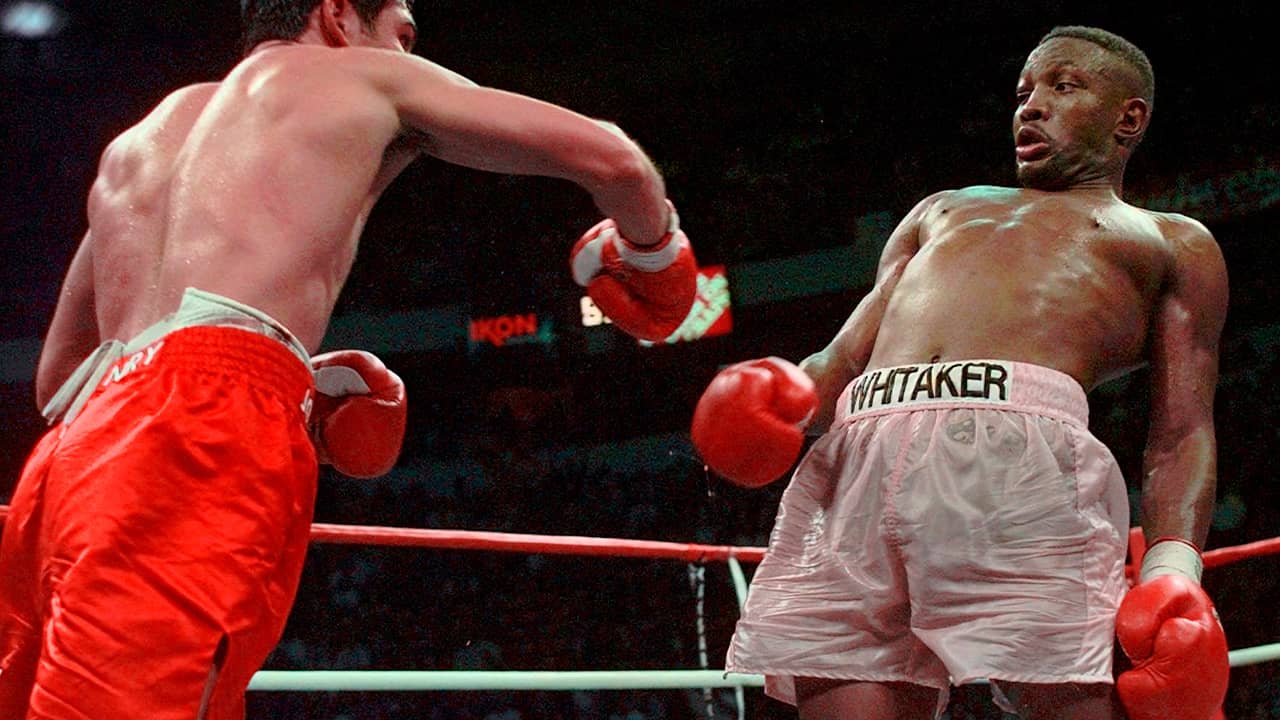 FILE – In this April 12, 1997, file photo, Pernell Whitaker, right, leans away from a punch by Oscar De La Hoya during their WBC Welterweight Championship fight at Thomas & Mack Center in Las Vegas. De La Hoya won by unanimous decision. Former boxing champion Pernell Whitaker has died after he was hit by a car in Virginia. He was 55. Police in Virginia Beach on Monday say Whitaker was a pedestrian when struck by the car Sunday night, July 14, 2019. The driver remained on the scene, where Whitaker was pronounced dead. (AP Photo/Eric Draper, File)

Foreman: ‘A Cat With Boxing Gloves’

“He would stand in the pocket and make everybody miss and frustrate the hell out of them,” Duva said. “He said it was the most beautiful feeling in the world, to hit the other guy and not get hit.”

Whitaker Made Millions in the Ring

Duva, whose Main Events company promoted all his fights, remembered Whitaker as being as sweet as his nickname. She said he was generous to a fault with a large group of family members, buying a house for many of them to live in before losing it after he retired from boxing.
Whitaker made millions in the ring — $6 million for the De La Hoya fight alone — but Duva said he had little left in the end.
“He wasn’t a spender. He was very modest,” she said. “But he was supporting an awful lot of people for a long time.”
A native of Norfolk, Whitaker battled alcohol problems throughout his adult life, Duva said. He also served time in prison after violating his probation in 2003 on a conviction for cocaine possession.
But in recent years Whitaker had been happy going to boxing events and meeting fans and signing autographs. He was supposed to be a part of the Manny Pacquiao-Keith Thurman fight night Saturday in Las Vegas, where he was going to be honored as a boxing legend.
“For years he wouldn’t do those things,” Duva said. “He found out that it was great, everybody was telling him how much they loved him and what a great fighter he was.”
Duva said Whitaker was divorced and had four children. His family issued a statement saying the death was “one of the darkest moments in our lives.”