WASHINGTON — When he resigned as defense secretary last December, Jim Mattis thought it might take two months to install a successor. That seemed terribly long at the time.

“It is needlessly disruptive to have a leadership vacuum for so long at the Department of Defense as the department prepares for its third acting secretary in less than a year.” — William Cohen, a former Republican senator who served as defense secretary during President Bill Clinton’s second term

Seven months later, the U.S. still has no confirmed defense chief even with the nation facing potential armed conflict with Iran. That’s the longest such stretch in Pentagon history.

There is also no confirmed deputy defense secretary, and other significant senior civilian and military Pentagon positions are in limbo, more than at any recent time.

The causes are varied, but this leadership vacuum has nonetheless begun to make members of Congress and others uneasy, creating a sense that something is amiss in a critical arm of the government at a time of global uncertainty.

William Cohen, a former Republican senator who served as defense secretary during President Bill Clinton’s second term, says U.S. allies — “and even our foes” — expect more stability than this within the U.S. defense establishment.

“It is needlessly disruptive to have a leadership vacuum for so long at the Department of Defense as the department prepares for its third acting secretary in less than a year,” Cohen told The Associated Press. He said he worries about the cumulative effect of moving from one acting secretary to another while other key positions lack permanent officials.

Pentagon Has Managed to Stay on Track

“There will inevitably be increasing uncertainty regarding which officials have which authority, which undermines the very principle of civilian control of the military,” Cohen said. “In addition, other countries — both allies and adversaries — will have considerable doubt about the authority granted to an acting secretary of defense both because of the uncertainty of confirmation as well as the worry that even being a confirmed official does not seem to come with the needed sense of permanence or job security in this administration.”

Key members of Congress are concerned, too.

It started with Mattis, who quit in December after a series of policy disputes with President Donald Trump that culminated in his protest of administration plans to pull troops out of Syria as they battled remnants of the Islamic State.

At least outwardly, the Pentagon has managed to stay on track during this churn, and senior officials caution against concluding that the military has been harmed.

Marine Gen. Joseph Dunford, whose chosen successor as chairman of the Joint Chiefs of Staff, Army Gen. Mark Milley, had his Senate confirmation hearing Thursday, told reporters that military commanders understand what their civilian leaders expect of them.

Navy Hit With Its Own Leadership Crisis

“We’ll look forward to a confirmed secretary of defense in the near future, for sure, but I don’t think (the vacancies) had a significant impact over the last six months,” Dunford said Tuesday. “I don’t believe that there’s been any ambiguity across the force about what they need to be doing and why they need to be doing it.”

“We’ll look forward to a confirmed secretary of defense in the near future, for sure, but I don’t think (the vacancies) had a significant impact over the last six months.” — Marine Gen. Joseph Dunford

The day after Dunford spoke, trouble struck on another personnel front, potentially endangering the nomination of Air Force Gen. John Hyten to take over as vice chairman of the Joint Chiefs of Staff when the incumbent, Gen. Paul Selva, retires July 31. The vice chairman is the nation’s second-highest military officer.

A senior military officer has accused Hyten of sexual misconduct. Members of Congress this week raised questions about the allegations and about the military investigation that found insufficient evidence to charge Hyten. It’s unclear when, or if, Hyten will get a confirmation hearing.

Just last Sunday, the Navy was hit with its own leadership crisis.

Adm. William Moran, who had already been confirmed by the Senate to become the top Navy officer on Aug. 1, abruptly announced he was retiring. He said he felt compelled to quit because of an investigation into his use of personal email and questions about the wisdom of his association with a retired Navy officer who had been accused of inappropriate conduct with women in 2016.

At Milley’s Senate hearing Thursday, he was asked repeatedly about the problem of multiple and lengthy vacancies in the higher ranks of the Pentagon. His responses suggested he sees at least the potential for it to cause damage. 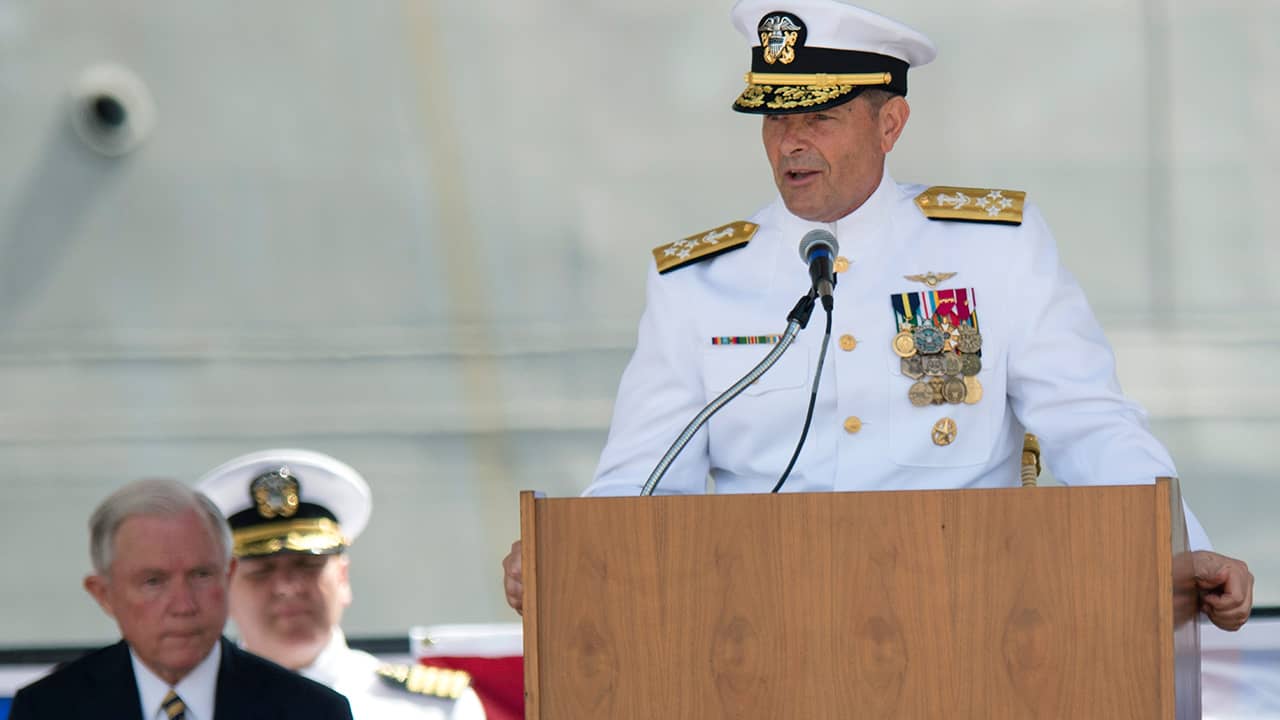 Adm. William Moran speaks during the commissioning of the USS Montgomery in Mobile, Ala., in 2016. Moran, the Navy admiral set to become his service’s top officer on Aug. 1, says he will instead retire.  (Albert Cesare/Montgomery Advertiser via AP, File)

What Can Be Hurt Is Coordination With White House

“It would be much better to have the nominees fully vetted and confirmed because that gives us much more effectiveness in terms of dealing with our adversaries,” members of Congress and the American public, he said.

Mark Esper, who has been the acting secretary of defense since Mattis’ first fill-in, former Boeing executive Patrick Shanahan, abruptly resigned in June, is scheduled to testify at his confirmation hearing next Tuesday. But even that comes with complications. He is required to step aside pending Senate confirmation, and Navy Secretary Richard Spencer will move into the role of acting defense secretary until Esper is approved. Spencer would then return to the Navy.

This tangled web is unlike anything the Pentagon has ever seen. Only twice previously has the Pentagon had an acting secretary; in the longest and most recent instance, the fill-in served for two months in 1989 during the George H.W. Bush administration. No administration has ever had two acting defense secretaries, let alone three.

John Hamre, who served as deputy defense secretary from 1997 to 2000, says much of the work in the Pentagon is based largely on a policy framework established by previous defense secretaries, and that work is not greatly affected by the absence of a confirmed secretary.

What can be hurt is coordination with the White House, “where an acting secretary is underpowered when sitting opposite a secretary of state, for example,” Hamre said. He added that defense policy innovation might be the area that suffers the most.

“This is where we will see the greatest impact by having only acting secretaries,” he said.