Trump Drops Bid to Include Citizenship Question on Census 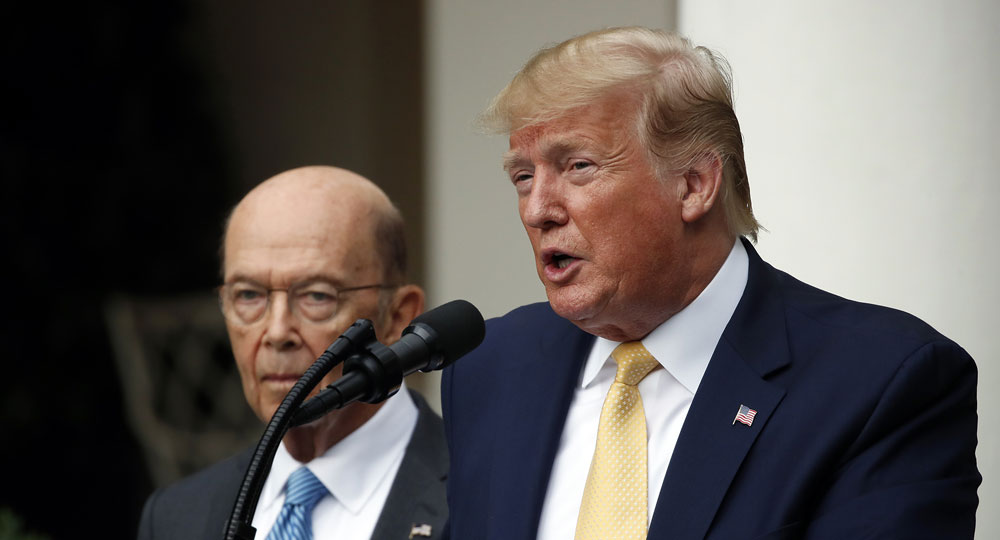 WASHINGTON — President Donald Trump abandoned his controversial bid to demand citizenship details from all respondents in next year’s census Thursday, instead directing federal agencies to try to compile the information using existing databases.
“It is essential that we have a clear breakdown of the number of citizens and non-citizens that make up the United States population,” Trump said at a Rose Garden announcement. He insisted he was “not backing down.”
His reversal comes after the Supreme Court blocked his efforts to include the citizenship question and as the government had already begun the lengthy and expensive process of printing the census questionnaire without it.

Trump had said last week that he was “very seriously” considering an executive order to try to force the question’s inclusion, even though such a move would surely have drawn an immediate legal challenge.


“We’re aiming to count everyone.” — President Donald Trump
But he said Thursday that he would instead be signing an executive order directing agencies to turn records over to the Department of Commerce.
“We’re aiming to count everyone,” he said.
The American Community Survey, which polls 3.5 million U.S. households every year, already includes questions about respondents’ citizenship.
Critics have warned that including the citizenship question on the census would discourage participation, not only by those living in the country illegally but also by citizens who fear that participating will expose noncitizen family members to repercussions.

Executive Order Would Not Have Been Enough

Keeping the prospect of adding the question alive could in itself scare some away from participating, while showing Trump’s base that he is fighting for the issue.
Trump’s 2016 campaign was animated by his pledge to crack down on illegal immigration, and he has tied the citizenship question to that issue, insisting the U.S. must know who is living here.
An executive order, by itself, would not have overridden court rulings blocking the question, though it could have given administration lawyers a new basis on which to try to convince federal courts the question passes muster.
Trump had previewed his remarks earlier Thursday at a White House social media event, where he complained about being told: “‘Sir, you can’t ask that question … because the courts said you can’t.'”
Describing the situation as “the craziest thing,” he went on to contend that surveyors can ask residents how many toilets they have and, “What’s their roof made of? The only thing we can’t ask is, ‘Are you a citizen of the United States?'”

Numerous Roadblocks to Adding the Question

The Census Bureau had stressed repeatedly that it could produce better citizenship data without adding the question to the decennial census, which had not been done since 1950.
The bureau recommended combining information from the annual American Community Survey with records held by other federal agencies that already include citizenship records.
“This would result in higher quality data produced at lower cost,” deputy Census Bureau director Ron Jarmin wrote in a December 2017 email to a Justice Department official.
But Commerce Secretary Wilbur Ross, who oversees the Census Bureau, ultimately rejected that approach and ordered the citizenship question be added to the census.
Trump’s administration has faced numerous roadblocks to adding the question, beginning with the ruling by the Supreme Court temporarily barring its inclusion on the grounds that the government’s justification was insufficient. A federal judge on Wednesday also rejected the Justice Department’s plan to replace the legal team fighting for inclusion, a day after another federal judge in Manhattan issued a similar ruling, saying the government can’t replace nine lawyers so late in the dispute without satisfactorily explaining why.

Refusing to concede, Trump had insisted his administration push forward, suggesting last week that officials might be able to add an addendum to the questionnaire with the question after it’s already printed. He has also toyed with the idea of halting the constitutionally mandated survey while the legal fight ensues.
Trump has offered several explanations for why he believes the question is necessary to include in the once-a-decade population count that determines the allocation of seats in the House of Representatives for the next 10 years and the distribution of some $675 billion in federal spending.
Senate Democratic Leader Chuck Schumer on Thursday called Trump’s efforts “outrageous” and accused him of pushing the question “to intimidate minorities, particularly Latinos, from answering the census so that it undercounts those communities and Republicans can redraw congressional districts to their advantage.”

Clovis Man Held on Charges of Sexual Abuse Against Minors