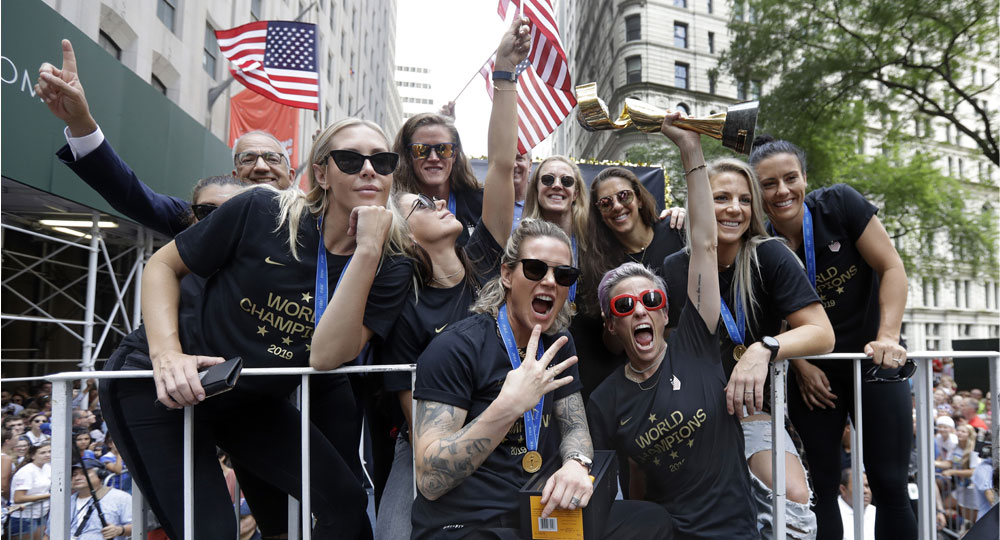 NEW YORK — Adoring fans lined New York City’s Canyon of Heroes on Wednesday to praise the World Cup-winning U.S. women’s national soccer team as athletic leaders on the field — and as advocates for pay equity off it.
Construction workers sounded air horns above crowds chanting “USA! USA!” as the hourlong parade moved up a stretch of lower Broadway that has long hosted so-called ticker tape parades for world leaders, veterans and hometown sports stars.
Co-captain Megan Rapinoe and her teammates shared a float with Mayor Bill de Blasio and U.S. Soccer Federation president Carlos Cordeiro. Rapinoe struck her now-famous victory pose, took a swig of Champagne and handed the bottle to a fan. Goalkeeper Alyssa Naeher held the World Cup trophy aloft.
Aly Hoover, 12, of Glen Ridge, New Jersey, stood along the route with a poster of the face of Alex Morgan, another team star. “I just want to be like them,” she said.

Team Has Sued for Gender and Pay Discrimination

Garret Prather brought his newborn son “to celebrate how the American women made us proud on and off the field.”
The team sealed its second tournament win by beating the Netherlands 2-0 on Sunday. It will get $4 million for winning the World Cup from FIFA, the international soccer governing body. The men’s French team got $38 million for winning last year.
The U.S. women’s team has sued the U.S. Soccer Federation for gender and pay discrimination. The women will get bonuses about five times less from the USSF than the men would have earned for winning the World Cup. The case is currently in mediation. 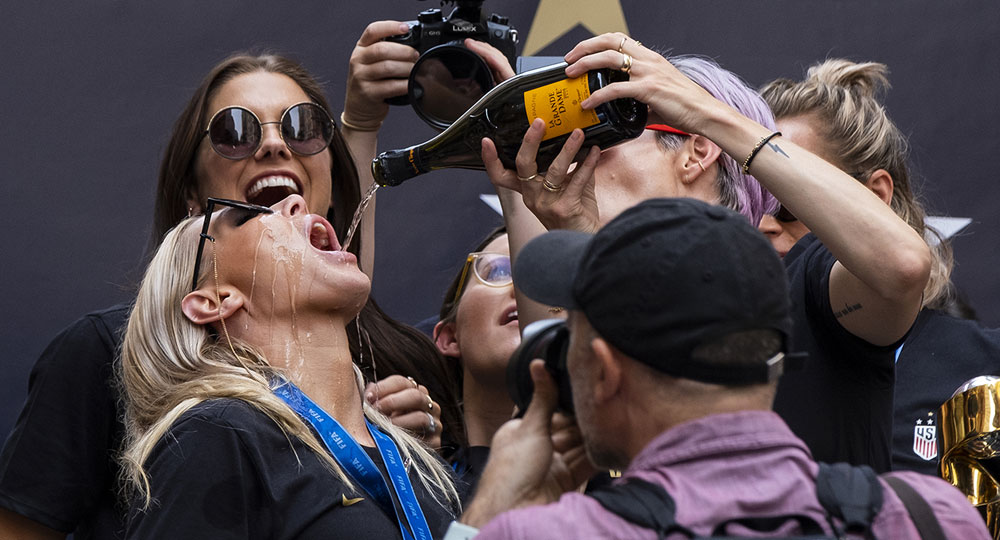 Kate Lane, who watched the parade, called the pay gap “massive” for the soccer players and “across the board” for most women.
“Especially in male-dominated professions,” said Lane, of Limerick, Ireland. “Women put just as much commitment into their work as their male counterparts.”
She’s hopeful the younger generation is soaking up the message from the women’s team, noting a girl about 7 years old wearing an “Equal Pay” T-shirt.

Earlier Wednesday, team members joined New York Gov. Andrew Cuomo, a Democrat, as he signed a law expanding gender pay equality in the state. He said women’s soccer players should be paid the same as male players.
U.S. Sen. Joe Manchin, a Democrat, introduced a bill Tuesday that would bar federal funding for the men’s 2026 World Cup until the U.S. Soccer Federation provides equal pay to the women’s and men’s teams. 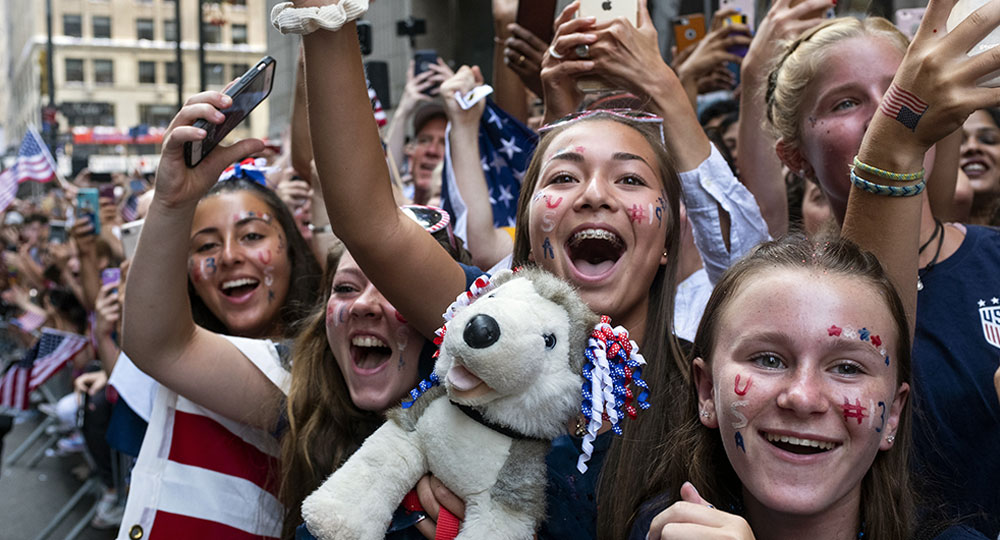 Fans celebrate as members of the U.S. women’s soccer team pass by during a ticker tape parade along the Canyon of Heroes on Wednesday in New York. (AP Photo/Craig Ruttle)

After the parade, de Blasio, also a Democrat, planned to honor the team with symbolic keys to the city.
The parade is named for the strands of ticker tape that used to be showered down from nearby office buildings. The tape has since been replaced with paper confetti, already drifting down from office buildings before Wednesday’s parade started.
The team had already started celebrating its record fourth Women’s World Cup title. After touching down at Newark Liberty International Airport on Monday, players shared a toast and sang “We Are the Champions.”

Rapinoe Makes the Rounds on TV

Team members appeared on ABC’s “Good Morning America” in Times Square on Tuesday to show off their trophy and answer questions from cheering kids.
Rapinoe, the outspoken star who won the awards for the tournament’s best player and top scorer, also appeared on CNN and MSNBC later Tuesday.
Rapinoe told CNN’s Anderson Cooper that Republican President Donald Trump’s slogan “Make America Great Again” is “harking back to an era that wasn’t great for everyone. It might’ve been great for a few people.”
Rapinoe told MSNBC’s Rachel Maddow that Trump had yet to invite the women’s soccer team to the White House.
Trump had tweeted that he would invite the team, win or lose. Rapinoe has said she wouldn’t be going to the White House. The team has accepted an invitation to visit Congress. 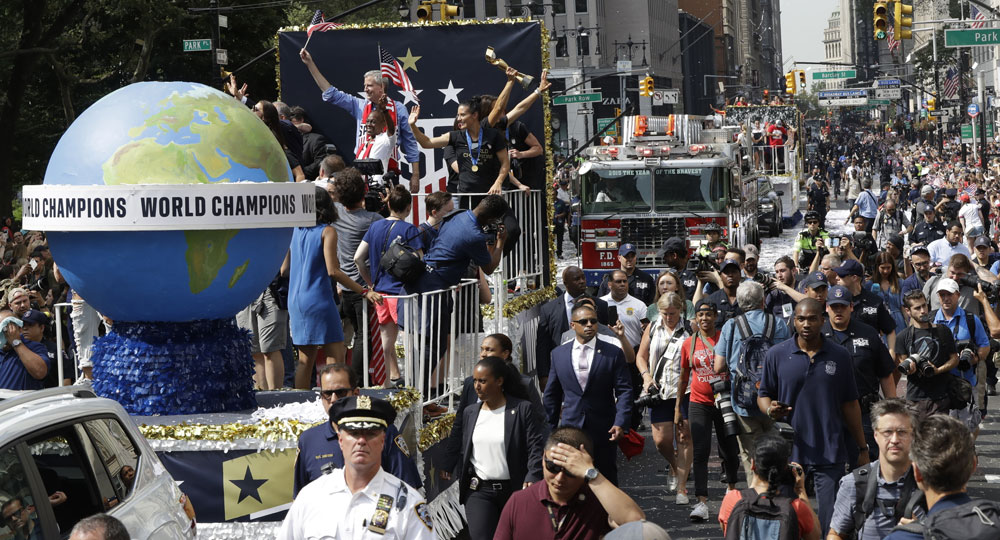 Floats with members of the U.S. women’s soccer team and New York Mayor Bill de Blasio makes their way up Broadway in a ticker tape parade along the Canyon of Heroes on Wednesday in New York. (AP Photo/Richard Drew)

Bill to Report Confessed Abuse by Priests Put on Hold