LOS ANGELES — Disney’s “The Lion King” has received no shortage of remakes and spinoffs in the years since its original 1994 release. Now, as the film reaches its silver anniversary, Disney delivers a new take on the animated musical.

“I think I’m really lucky, because I feel like a lot of the people who are experiencing it don’t remember the first one.” — Donald Glover, who voices adult Simba

Cast and crew gathered in Hollywood for “The Lion King” world premiere Tuesday night, and discussed reimagining the classic.

“I think I’m really lucky, because I feel like a lot of the people who are experiencing it don’t remember the first one,” joked Donald Glover, who voices adult Simba.

“(The original film) is such a big part of who I was,” Glover continued, adding he felt the weight of his role especially during his duet of “Can You Feel the Love Tonight?” with co-star Beyoncé.

“Tackling it was really just trying to make the song feel as emotional as it was before,” he said.

While the remake pays homage to the source material, a new approach allowed for more creative liberties than its predecessor, many cast and crew noted.

Hans Zimmer, who composed the original film’s underscore, said he was excited to produce new compositions as well as revamp original music cues.

“This time, I could breathe,” he said, explaining that some of his music was performed too fast the first time around. “I could let them play properly. I could do things with them that I never did before.” 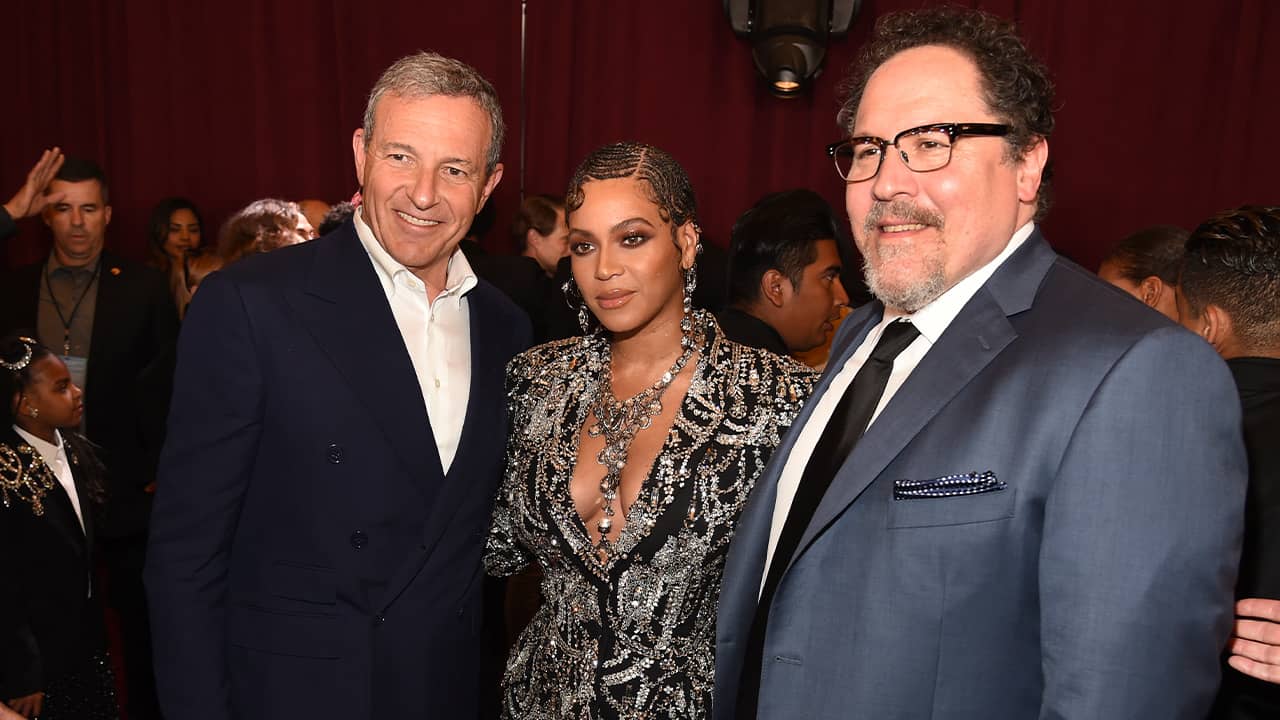 Bob Iger, left, chairman and CEO of The Walt Disney Company, poses with “The Lion King” cast member Beyonce, center, and the film’s director Jon Favreau at the premiere of the film at the El Capitan Theatre, Tuesday, July 9, 2019, in Los Angeles. (Photo by Chris Pizzello/Invision/AP)

‘The Music Department, We Went Crazy’

Composer Lebo M. said the remake will feature tunes from the original, and a host of new songs, as well as the anthem “He Lives in You,” which debuted in the stage production.

“We wrote it originally for the movie 25 years ago, and it made its mark on Broadway and around the world, and it’s now a very special version in this movie soundtrack,” he said. “The music department, we went crazy.”

“We wrote it originally for the movie 25 years ago, and it made its mark on Broadway and around the world, and it’s now a very special version in this movie soundtrack,” he said. “The music department, we went crazy.” — Composer Lebo M.

At times, so did the cast.

Actor Billy Eichner, who voices Timon, said director Jon Favreau (who also helmed Disney’s recent “The Jungle Book”) allowed him to record his voiceovers alongside his co-star Seth Rogen, the voice of Pumbaa. Most voice actors do the job solo.

“I think it all comes back to Jon Favreau for being brilliant and knowing how to do a big spectacular film that people can also relate to and make it feel organic and genuinely funny,” Eichner said. “Even when Donald Glover came in to do ‘Hakuna Matata’ in our scenes together, we were all riffing. We kept it very organic and very raw, and I think the movie hopefully benefits from that.”

Glover shared a similar sentiment about Favreau, saying the director’s vision for the remake is the reason he signed on.

“The story of us all being connected is a universal truth that we really can’t ignore anymore,” he said. “If we don’t really like see the value of our lives together what’s the point of all this? Because we’re all connected.”

The vibrant red carpet hosted stars including former Destiny’s Child singers Michelle Williams and Kelly Rowland, Tiffany Haddish, Jamie Foxx, Chrissy Metz, Tracy Morgan, Yara Shahidi, Chloe x Halle, and Zooey Deschanel (whose father, Caleb Deschanel, is the cinematographer). Inside, Favreau introduced the cast, who were met with a standing ovation before the film started. He also singled out filmmakers of the animated original that were in the audience for special thanks.