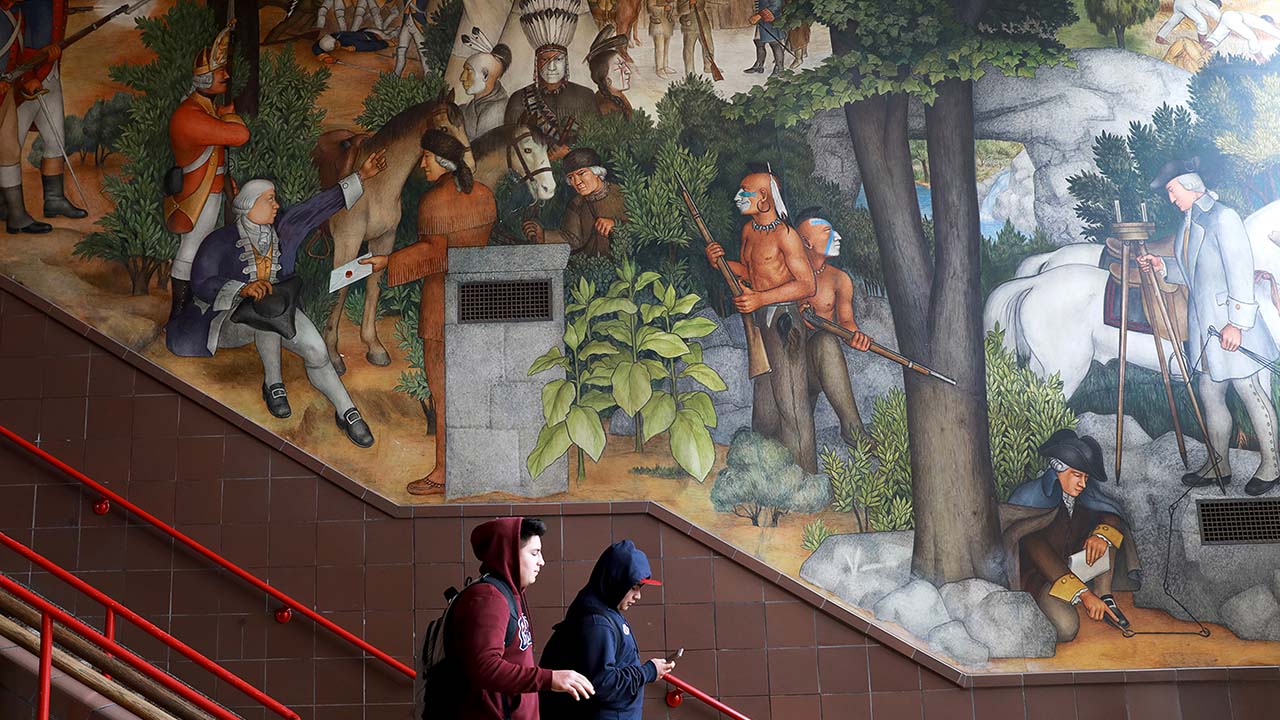 SAN FRANCISCO — San Francisco will spend up to $600,000 to paint over historical artwork at a public school depicting the life of George Washington, a mural once seen as educational and innovative but now criticized as racist and degrading for its depiction of black and Native American people.

“We on the left ought to welcome the honest portrayal,” UC Berkeley professor Richard Walker said, adding that destroying a piece of art “is the worst way we can deal with historic malfeasance, historic evils.”
The “Life of Washington” was painted by Victor Arnautoff, one of the foremost muralists in the San Francisco area during the Depression. The San Francisco School Board’s decision to paint over the 83-year-old mural is prompting some to worry that other artwork from the so-called New Deal era could face a similar fate because of changing sensitivities.

In addition to depicting Washington as a soldier, surveyor and statesman, the 13-panel, 1,600-square foot mural at George Washington High School contains images of white pioneers standing over the body of a Native American and slaves working at Washington’s Mount Vernon estate in Virginia.
The board’s decision last week comes at a time when the legacies of Washington and other historical figures who owned slaves are being re-examined. Some cities have changed the names of streets and buildings named after slave owners.
Richard Walker, a professor emeritus of geography at the University of California, Berkeley and director of the history project, Living New Deal, said the Washington mural is meant to show the “uncomfortable facts” about America’s first president. For that, it was among many New Deal works of art considered radical when created.
“We on the left ought to welcome the honest portrayal,” Walker said, adding that destroying a piece of art “is the worst way we can deal with historic malfeasance, historic evils.”

Painting It Over Is a ‘Real Fresh Start’

Mark Sanchez, vice president of the school board and a third-grade teacher, said students who must walk past the mural during the school day don’t have a choice about seeing the harmful images. “Painting it over represents not only a symbolic fresh start, but a real fresh start,” he said.
Lope Yap, Jr., vice president of the Washington High School Alumni Association and a 1970 graduates, disagreed, saying when he was a student and saw the mural he was “awed by the subtle ways Arnautoff was able to critique American history.” He said the depictions are “treasures, priceless art” and painting it over is tantamount to pretending the history depicted never happened.
“I’m not into censorship,” Yap said. “I would want to deal with history so we can prevent this from ever happening again.”
The mural is a fresco, which means it’s painted on the wall and can’t easily be removed. Painting it over won’t happen immediately. Should a lawsuit or other delay arise, it will be covered up until the issues are resolved. The board plans to digitally archive the mural.
Most of the $600,000 earmarked for the project will go toward a required environmental review and to cover expected legal challenges.

Mural First Questioned in the 1960s

George Washington High School has about 2,000 students. Nearly all are people of color and many come from low-income families. As early as the 1960s, some students argued the mural’s imagery is offensive and racist. Renewed opposition emerged in recent years amid protests in the South and elsewhere over statues honoring Confederate heroes.


“I understand the importance of art, and it should be the last thing we do, to attempt to cover any kind of art up. The starting point has to be from those who feel they are harmed and how that is unacceptable, especially given the history of this country. When we don’t listen, we don’t learn.” — School board VP Mark Sanchez
Arnautoff, a Russian-born communist and social critic, was hired with Federal Art Project funds as part of President Franklin D. Roosevelt’s New Deal, a series of government programs meant to help lift the country out of the Great Depression of the 1930s.
He was one of a group of artists to paint murals at San Francisco’s Coit Tower that prompted anti-communists to delay the tower’s opening. Arnautoff’s piece, called “City Life,” shows urban workers crowding around a newsstand of socialist newspapers and magazines. The piece faced criticism for failing to include the conservative-leaning San Francisco Chronicle.
“Victor Arnautoff was far ahead of his time, and we have yet to catch up with him in terms of making school curriculum more inclusive and historically accurate,” said Harvey Smith, president of the National New Deal Preservation Association.

Will Other New Deal Era Murals Be Destroyed?

Walker and other supporters of the mural worry that painting over it may signal that it’s acceptable to destroy the thousands of other New Deal murals across the country. Activists have been successful in getting a series of New Deal murals at the University of New Mexico covered up. Other New Deal murals in New York and Iowa have been vandalized, as well as painted over and subsequently restored.
“The mural is an immense public treasure during one of the few periods of American history where you had the federal government supporting public art, public spaces, public goods,” Walker said. “It’s been the right that has always attacked the New Deal with its social programs.”
Walker suggested rather than destroying the Washington mural, school officials should simply cover it and require freshmen to take a course on slavery and California’s role in subjugating Native Americans.
To Sanchez, that’s not enough.
“I understand the importance of art, and it should be the last thing we do, to attempt to cover any kind of art up,” he said. “The starting point has to be from those who feel they are harmed and how that is unacceptable, especially given the history of this country. When we don’t listen, we don’t learn.”