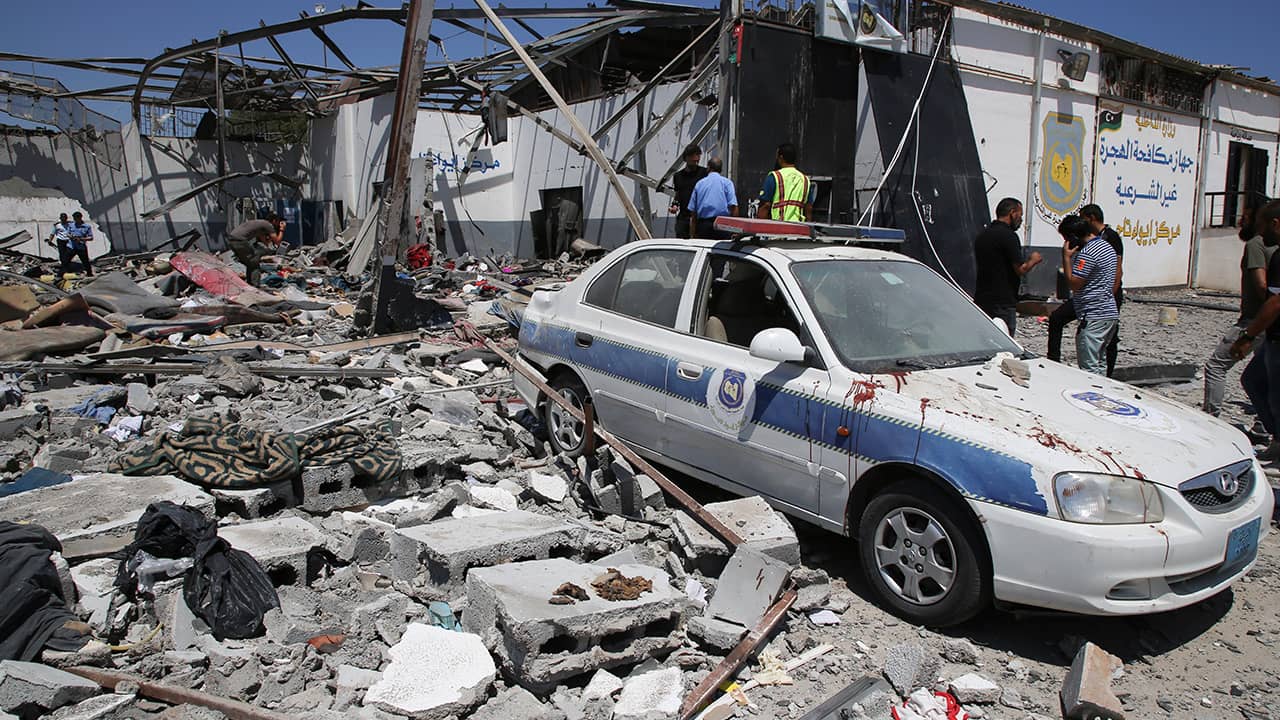 BENGHAZI, Libya — An airstrike hit a detention center for migrants near the Libyan capital of Tripoli early Wednesday, killing at least 44 people and wounding dozens of others in an attack that the U.N. human rights chief said could amount to a war crime.
The Tripoli-based government blamed the attack on forces associated with Gen. Khalifa Hifter, whose Libyan National Army has been waging an offensive against rival militias in the capital of the war-torn North African country since April.
The attack refocused attention and raised questions about the European Union’s policy of cooperating with the militias that hold migrants in crowded and squalid detention centers to prevent them from crossing the Mediterranean to seek better lives in Europe. Most of them were apprehended by the Libyan coast guard, which is funded and trained by the EU to stem the flow of migrants.
Hifter’s forces said they were targeting a nearby military site, not the detention center. There also were suspicions of involvement by foreign countries allied with his forces. Countries assisting Hifter include Egypt, the United Arab Emirates and Russia.
The airstrike in Tripoli’s Tajoura neighborhood hit a workshop housing weapons and vehicles, as well as the detention center, an adjacent hangar housing about 150 migrants, mostly Sudanese and Moroccans, according to two migrants who spoke to The Associated Press on condition of anonymity for fear of reprisal.
Online video purported to be from inside the detention center showed blood and human remains mixed with rubble and the belongings of the victims.

The UNHCR Is Sending Medical Teams to the Site

The U.N. gave an initial figure of 44 dead and more than 130 wounded. But the two migrants told the AP that three or four escaped harm and about 20 were wounded. They said the rest were killed, indicating the final death toll could be much higher.

The head of the African Union, Moussa Faki Mahamat, also condemned the airstrike, urging an independent investigation and saying those responsible for the “horrific crime” should be held to account.
The Tripoli-based Government of National Accord, which is backed by the U.N., called for an investigation by the world body.
Libya became a major crossing point for migrants to Europe after the overthrow and death of longtime dictator Moammar Gadhafi in 2011, when the North African nation was thrown into chaos, armed militias proliferated and central authority collapsed.
At least 6,000 migrants from Eritrea, Ethiopia, Somalia, Sudan and other nations are locked in dozens of detention facilities in Libya run by militias accused of torture and other abuses. The detention centers have limited food and other supplies for the migrants, who often end up there after arduous journeys at the mercy of abusive traffickers who hold them for ransom from families back home.
The U.N. refugee agency has said that more than 3,000 migrants are in danger because they are held in detention centers near the front lines.
Gen. Khaled el-Mahjoub, a spokesman for Hifter’s LNA forces, denied targeting the detention center, saying it was the militia camp in the Tajoura neighborhood that was the target. He did not deny, however, that the migrant detention center was hit.
“We didn’t give orders to target the shelter,” he said.

The Attack Could Increase Greater Western Pressure on Hifter

The EU urged Libyan authorities to better protect migrants, with its top diplomat and two top policy commissioners deploring the “shocking and tragic attack” and saying it highlights “the dire and vulnerable situation of migrants caught up in the spiral of violence in the country.”
Many more migrants “are at risk and should be transferred to safe places swiftly,” the EU said.

Although the attack could increase greater Western pressure on Hifter, Claudia Gazzini, a Libya expert at the International Crisis Group, said it was highly unlikely to change the course the fighting in and around Tripoli.
“For both Hifter-led forces and those loyal to the Tripoli-based government, this is an existential war that sees little room for compromise,” she said.
She did not expect any actions other than a “verbal condemnation” of Hifter’s forces if it is proven they were behind the airstrike.
Hifter, who receives support from Egypt, the UAE and Saudi Arabia, says he is determined to restore stability to the North African country. His rivals, mainly Islamists, are supported by Turkey and Qatar.
His forces control much of Libya’s east and south but suffered a significant blow last week when militias allied with the Tripoli government reclaimed Gharyan, a town about 100 kilometers (62 miles) from the capital and a key LNA supply route.
On Monday, the LNA said it had begun an air campaign on rival forces in Tripoli.

Fathi Bashagha, interior minister of the Tripoli-based government, alleged that Hifter’s foreign allies were behind the airstrike and told the AP that they “went mad” after his forces lost Gharyan. He did not identify any countries or provide any supporting evidence. He also denied weapons were stored at the detention facility complex.