Witness at Navy SEAL Trial: I Killed Victim Out of Mercy 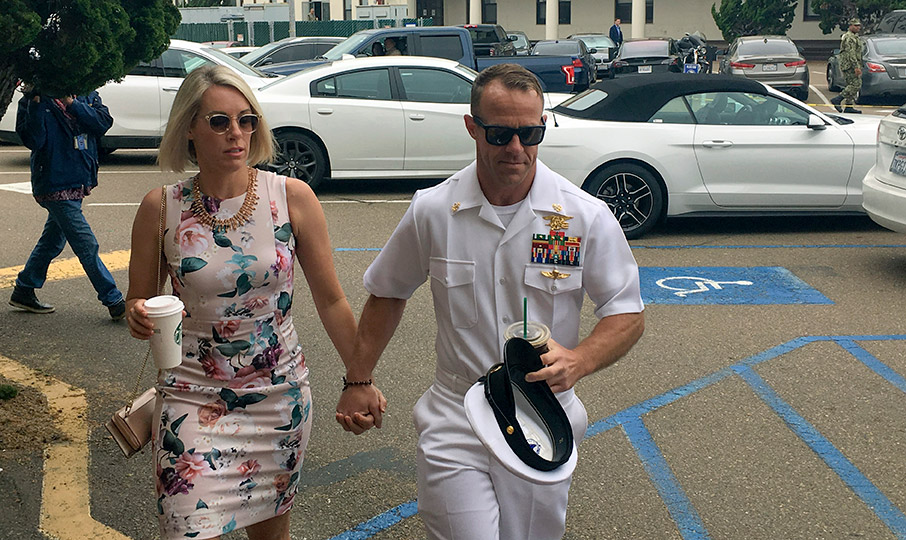 SAN DIEGO — A witness called to testify against a decorated Navy SEAL charged with murder said Thursday that he killed the victim, a bombshell admission he described as an act of mercy for the wounded Islamic State fighter.
Special Operator 1st Class Corey Scott said he asphyxiated the adolescent prisoner in Iraq two years ago after Special Operations Chief Edward Gallagher unexpectedly stabbed him.
A visibly angry prosecutor accused Scott of lying, saying he had told investigators a different story over the months and changed it only after a judge granted him immunity and ordered him to testify.
The testimony is the latest setback for prosecutors and a big boost for Gallagher, who is fighting charges of premeditated murder in the boy’s death and attempted murder in the shooting of civilians.

Witness Said the Boy Would Have Survived Stabbing

Before the stabbing, Scott said that he and Gallagher had stabilized the sedated prisoner who was wounded in an airstrike and that he was breathing normally through a tube inserted to clear his airway.
Scott said he was shocked when Gallagher, the platoon’s leader, stabbed the boy at least once below the collarbone. He said there was no medical reason for it. Gallagher then grabbed his medical bag and walked away.
“I was startled and froze up for a little bit,” Scott said.
Scott said the boy would have survived the stabbing, but he plugged the youth’s breathing tube with his thumb because he believed the prisoner would eventually be tortured by the Iraqi forces who captured him and delivered him to the SEAL compound for medical treatment.

The Fourth SEAL to Take the Stand

“I knew he was going to die anyway, and I wanted to save him from waking up to whatever would happen to him,” Scott said.
Scott was the fourth SEAL to take the stand and second to say he witnessed the stabbing. Prosecutors have alleged that the stabbing killed the boy.
The prosecutor, Lt. Brian John, accused Scott of lying, saying he had changed his story only after being granted immunity that prevents him from being charged in the killing.
“So you can stand up there and you can lie about how you killed the ISIS prisoner so Chief Gallagher does not have to go to jail,” John said. “You don’t want Chief Gallagher to go to jail, do you?”
“He’s got a wife and family,” Scott said. “I don’t think he should be spending his life in prison.”
Scott met repeatedly with investigators and never revealed he had anything to do with the death, John said. He had always asserted that there was no way to save the prisoner’s life.
Scott said no one asked him how the patient died and acknowledged the immunity deal allowed him to finally fess up.
He wanted to invoke his Fifth Amendment right against self-incrimination when called by the prosecution, but the judge rejected that. Capt. Aaron Rugh granted him immunity and ordered him to take the stand.