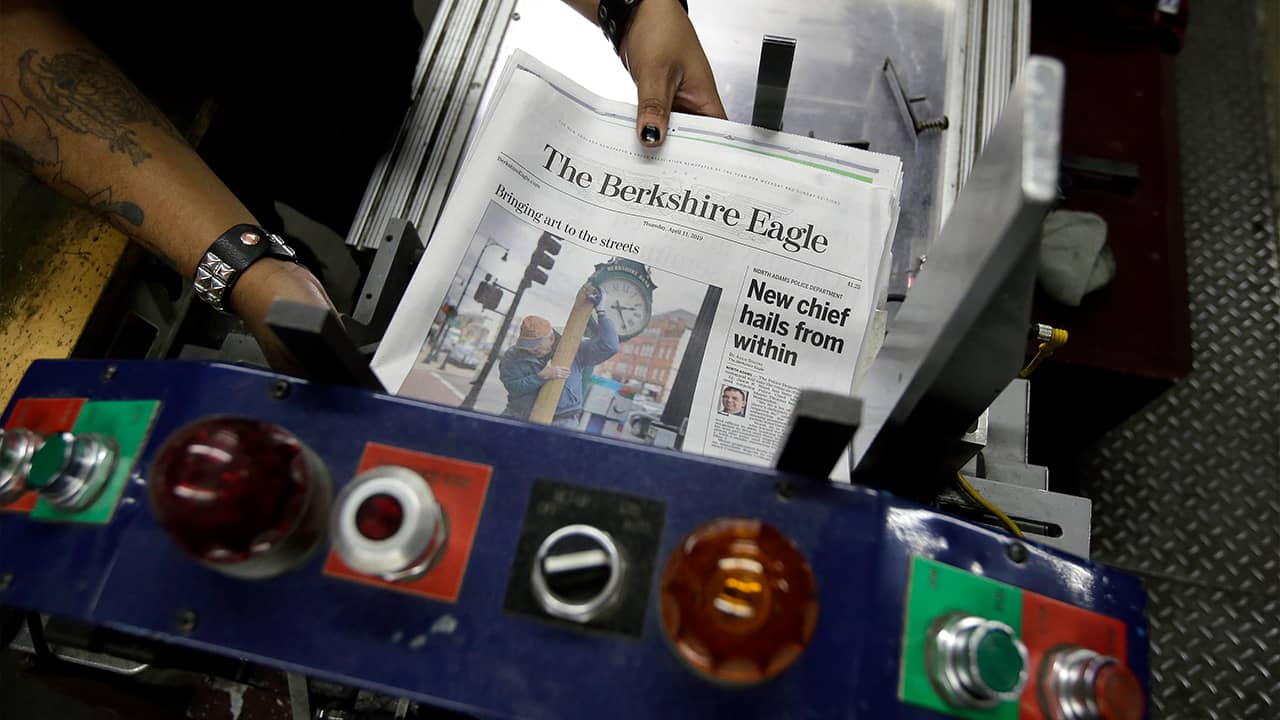 PITTSFIELD, Mass. — The Berkshire Eagle has an expanded investigative team. There’s a new 12-page lifestyle section for the Eagle’s Sunday editions. There’s a new monthly magazine focusing on the area’s culinary and natural charms. There is an advisory board that includes cellist Yo-Yo Ma and Pulitzer-winning writer Elizabeth Kolbert.
The newspaper is wider, its paper thicker. There’s even a second daily crossword puzzle.
A hiring flurry, driven by new owners, has brought more than 50 new jobs to the western Massachusetts daily and its three sister papers in Vermont. The idea: Investing in the newsroom will translate into more paying readers.
It’s a leap of faith at a time of relentlessly bad news for the local news industry: Newsroom employment down by nearly half over the past 15 years. Waves of layoffs continuing to hit both traditional newspaper chains and digital news startups. Some cities and towns so denuded of coverage that they’re described as “news deserts.”
Three years ago, Fredric Rutberg, a retired local district judge, pulled together a group of local investors who bought the small newspaper company from a hedge fund-backed media chain with a reputation for cost-cutting and layoffs.
So far, readers have trickled, not flocked, back to the flagship Berkshire Eagle, the only daily newspaper in the hilly westernmost region of Massachusetts, where 130,000 people are scattered across 30-plus towns and villages.

Level of Involvement a Thrilling Contrast

“Our business plan was simply to increase the quality of the content and attract new readers,” Rutberg said. “We’ve made more than a bona fide effort at the first part. We are in the second right now, and the jury’s out.”
Rutberg, 73, is relishing the challenge.


“Our business plan was simply to increase the quality of the content and attract new readers. We’ve made more than a bona fide effort at the first part. We are in the second right now, and the jury’s out.” — Fredric Rutberg, a retired local district judge
He hosts gatherings around town called “Coffee with the President,” promoting the Eagle’s award-winning stories while mollifying readers who grumble if the newspaper is delivered late. He regularly visits the Vermont newspapers and pursues strategies for revenue diversification, including a planned in-house ad-agency.
For executive editor Kevin Moran, this level of involvement is a thrilling contrast to the Eagle’s former corporate owners. During a rare visit from them in 2015, the agenda was mostly budget cuts.
Shortly afterward, Moran said, he oversaw the layoffs of 19 people at the four newspapers, one of his lowest moments in a two-decade career spent rising through the ranks of the Eagle and its affiliated newspapers. The year before, 18 positions had already been cut.
Rutberg and his three partners seized a short window of opportunity when Alden Global Capital was putting several of its newspapers up for sale following failed negotiations to sell off the company’s media properties, known as Digital First Media, to a private equity firm.
Through a spokeswoman, Molly Curry, Digital First declined to comment for this story. In the past, Digital First has countered criticism of its tactics, saying it runs “newspapers profitably and sustainably so that they can continue to serve their local communities.” Advertising and circulation declines have ravaged the newspaper industry generally for more than a decade. It remains to be seen how sustainable the expanded Eagle will be under its new owners.
But if they fail, it won’t be for lack of effort.
They swiftly set out to transform the paper, down to replacing thin newsprint that curled in humid weather. They wanted a “world-class” arts and culture section, worthy of a region that boasts the Boston Symphony Orchestra’s summer home and a theater scene that lures Hollywood stars.
Popular with New York tourists and second-home owners, the Berkshire region has struggled with an exodus of its working-age population, particularly since top employer General Electric packed up and left in the 1980s and 90s.
The Eagle’s reporters delve into the troubles of communities overshadowed by New York City to the south and Boston to the east. They have won awards for investigations into the decaying state of bridges and the struggle to bring broadband internet to rural areas.
The hard part is persuading the people of the Berkshires to pay for such coverage.
The Eagle’s overall paid circulation fell more than 20 percent during the first year under new ownership. Rutberg counts it as an achievement that circulation remained mostly stable the second year, at more than 15,000 on weekdays and nearly 18,000 on Sundays, still half what it was a decade ago.
On the bright side, digital subscriptions are ticking up.

Like many newspapers, the Eagle increasingly relies on revenue from paid subscriptions, as major advertisers migrate to online giants such as Facebook and Google.
The paper charges $13 a month for a digital-only subscription, letting people read three articles online before hitting the paywall. Social media drives a third of the newspaper’s digital traffic, but many readers bristle at being asked to pay for content they see on Facebook.