TORONTO — Gunfire broke out and a stampede ensued as fans celebrated at a rally Monday for the NBA champion Raptors, leaving four people shot and thousands fleeing less than a block from where the players and Canadian Prime Minister Justin Trudeau sat on stage.

Three people were arrested and two guns were recovered, Toronto police said, and investigators did not discuss a possible motive for the attack.

Droves of Raptors fans ran from the shooting in a stampede from the City Hall square, which was packed with tens of thousands of people. Earlier Monday, well over a million fans packed downtown Toronto for a parade for the Raptors, raising concerns about safety and overcrowding as the city celebrated its first major sports title in more than a quarter-century.

Police Chief Mark Saunders said four people suffered gunshot wounds but said none of the injuries were life-threatening. Others suffered minor injuries as they tried to get away from the shooting, said Saunders, who asked for witnesses and people who might have video to come forward and help investigators.

Andrew Singh said he heard what appeared to be gunshots and that a woman was wounded before people started scrambling.

“We just saw the girl drop to the floor and the guy running off,” the 29-year-old said. “All I heard was, ‘bop bop bop.’

People Started Running in All Directions

Asked if it was a targeted shooting or terrorism-related, police spokeswoman Allison Sparkes said the investigation was ongoing.

During a speech from one of the team owners, the host of the rally interrupted the proceedings to alert the crowd to an emergency and asked for calm. Trudeau, Toronto Mayor John Tory, NBA Finals MVP Kawhi Leonard and other players were among those on stage at the time.

“I want to make sure everyone stays calm,” said the host, sportscaster Matt Devlin. “This is serious. Everyone stay calm … There is an emergency being dealt with.”

Those on stage remained in place and speeches resumed shortly after.

“I hope all those injured in today’s shooting have a speedy recovery, and I’d like to thank the Toronto police for acting so quickly,” Trudeau tweeted. “We won’t let this act of violence take away from the spirit of today’s parade.”

Mike Mudidi said he was enjoying the celebration when he heard screams behind him that someone had pulled out a gun. He said he froze as people started running in all directions.

“I just grabbed my buddies’ hands and ran,” he said.

Raptors fan Phil D’Souza said the violence left a bad taste in his mouth, and he questioned whether he would attend a similar event in the future. 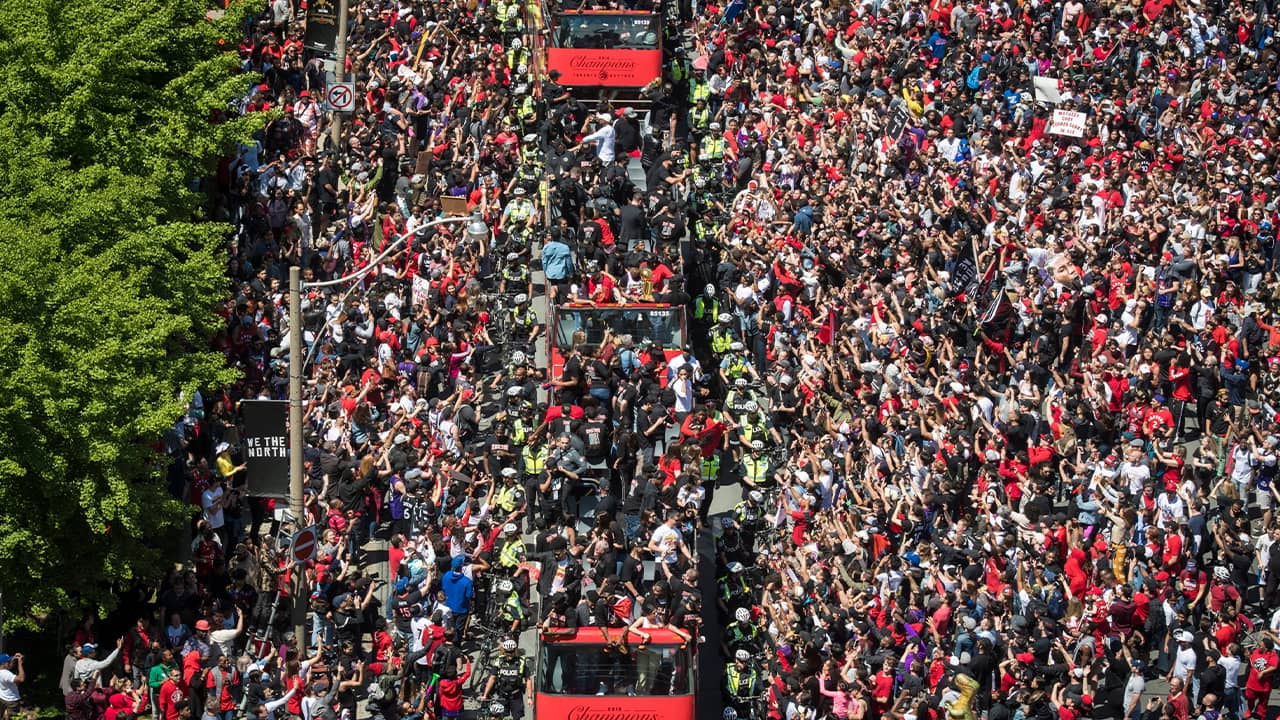 Toronto Considered One of the Safest Cities in North America

Another fan said the stampede was scary.

“I hope those found responsible will be held to account to the full extent that the law permits. I want to commend and thank the millions of other people who happily and peacefully celebrated our beloved Toronto Raptors.” — Toronto Mayor John Tory

“When you see a bunch of people coming at you, you don’t know what to do, whether to run or not. You don’t want to get stampeded over,” Sam Sunday said.

There were at least four abandoned strollers in the square, indicating parents may have grabbed their children and run. Shoes, clothing and bags were left behind. An entire nearby intersection was cordoned off with police tape.

Tory, the mayor, thanked police for their quick response and said he was angered by the shooting.

“It is disappointing and I’m sure a source of anger for more than just me that anyone would carry a gun and discharge it at what was otherwise a joyous celebration,” Tory said in a statement. “I hope those found responsible will be held to account to the full extent that the law permits. I want to commend and thank the millions of other people who happily and peacefully celebrated our beloved Toronto Raptors.”

Canada’s biggest city, with a population of 2.9 million, is considered one of the safest cities in North America.

Tory previously urged every city resident to come celebrate the Raptors’ first championship and declared Monday as “We The North Day,” after the franchise’s slogan.

Some 1.5 million fans withstood packed conditions to attend the parade. Nicolas Caramanna, 21, said the crowd started to get rowdy shortly after he arrived at 9 a.m.

Raptors Could Not Help but Marvel at the Fan Response

Many others chose to miss school or work. Cypher Sabanal, 15, said his mom let him skip class to attend the celebration.

John Moreira called in sick to work so he could be part of Toronto’s first celebration of this magnitude since the Blue Jays won the World Series in 1993.

“I told my boss I wanted to be at the parade and he said there wasn’t much he could do if I called in sick, so that’s exactly what I did,” the 31-year-old said.

As the parade inched forward — discernibly behind schedule — a number of Raptors could not help but marvel at the fan response.

“It’s been amazing,” Leonard said. “Thank you Toronto, thank you Canada for the support. We did it.”

Several fans were seen carrying signs imploring Leonard to re-sign with the Raptors. He will be a free agent this summer.

“This is unbelievable,” he said.