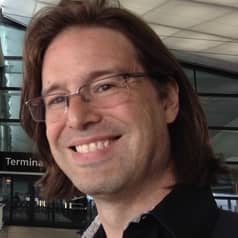 The novel tells the story of Winston Smith, a hapless middle-aged bureaucrat who lives in Oceania, where he is governed by constant surveillance. Even though there are no laws, there is a police force, the “Thought Police,” and the constant reminders, on posters, that “Big Brother Is Watching You.”

Smith works at the Ministry of Truth, and his job is to rewrite the reports in newspapers of the past to conform with the present reality. Smith lives in a constant state of uncertainty; he is not sure the year is in fact 1984.

Although the official account is that Oceania has always been at war with Eurasia, Smith is quite sure he remembers that just a few years ago they had been at war with Eastasia, who has now been proclaimed their constant and loyal ally. The society portrayed in “1984” is one in which social control is exercised through disinformation and surveillance.

As a scholar of television and screen culture, I argue that the techniques and technologies described in the novel are very much present in today’s world.

One of the key technologies of surveillance in the novel is the “telescreen,” a device very much like our own television.

The telescreen displays a single channel of news, propaganda and wellness programming. It differs from our own television in two crucial respects: It is impossible to turn off and the screen also watches its viewers.

The telescreen is television and surveillance camera in one. In the novel, the character Smith is never sure if he is being actively monitored through the telescreen. 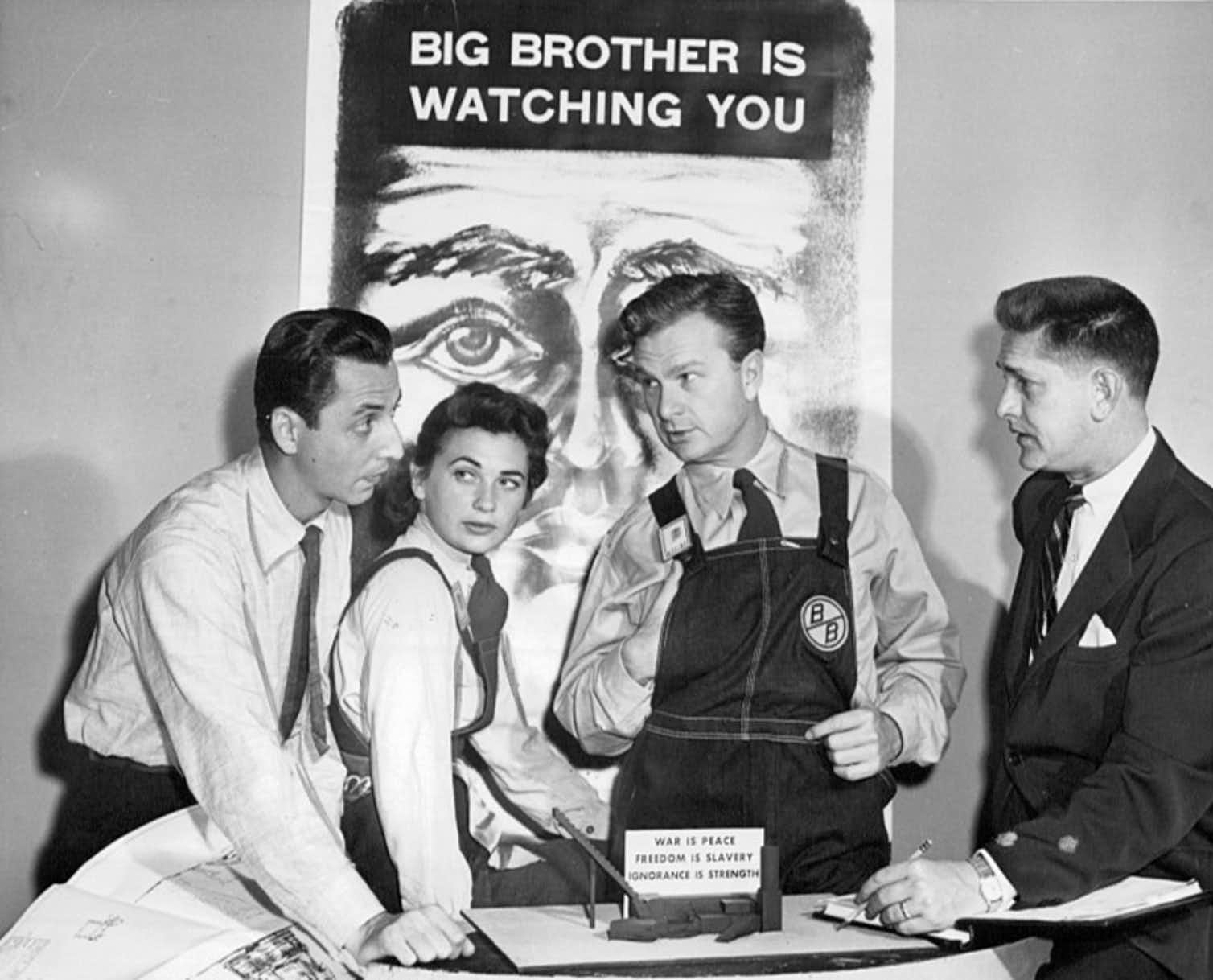 A publicity photo on the set of the CBS anthology television series ‘Studio One’ depicts a presentation of George Orwell’s “1984.” (CBS Television)

Orwell’s telescreen was based in the technologies of television pioneered prior to World War II and could hardly be seen as science fiction. In the 1930s Germany had a working videophone system in place, and television programs were already being broadcast in parts of the United States, Great Britain and France.

Past, Present and Future

The dominant reading of “1984” has been that it was a dire prediction of what could be. In the words of Italian essayist Umberto Eco, “at least three-quarters of what Orwell narrates is not negative utopia, but history.”

The dominant reading of “1984” has been that it was a dire prediction of what could be. In the words of Italian essayist Umberto Eco, “at least three-quarters of what Orwell narrates is not negative utopia, but history.”

Additionally, scholars have also remarked how clearly “1984” describes the present.

In 1949, when the novel was written, Americans watched on average four and a half hours of television a day; in 2009, almost twice that. In 2017, television watching was slightly down, to eight hours, more time than we spent asleep.

In the U.S. the information transmitted over television screens came to constitute a dominant portion of people’s social and psychological lives.

In the year 1984, however, there was much self-congratulatory coverage in the U.S. that the dystopia of the novel had not been realized. But media studies scholar Mark Miller argued how the famous slogan from the book, “Big Brother Is Watching You” had been turned to “Big Brother is you, watching” television.

Miller argued that television in the United States teaches a different kind of conformity than that portrayed in the novel. In the novel, the telescreen is used to produce conformity to the Party. In Miller’s argument, television produces conformity to a system of rapacious consumption – through advertising as well as a focus on the rich and famous. It also promotes endless productivity, through messages regarding the meaning of success and the virtues of hard work. 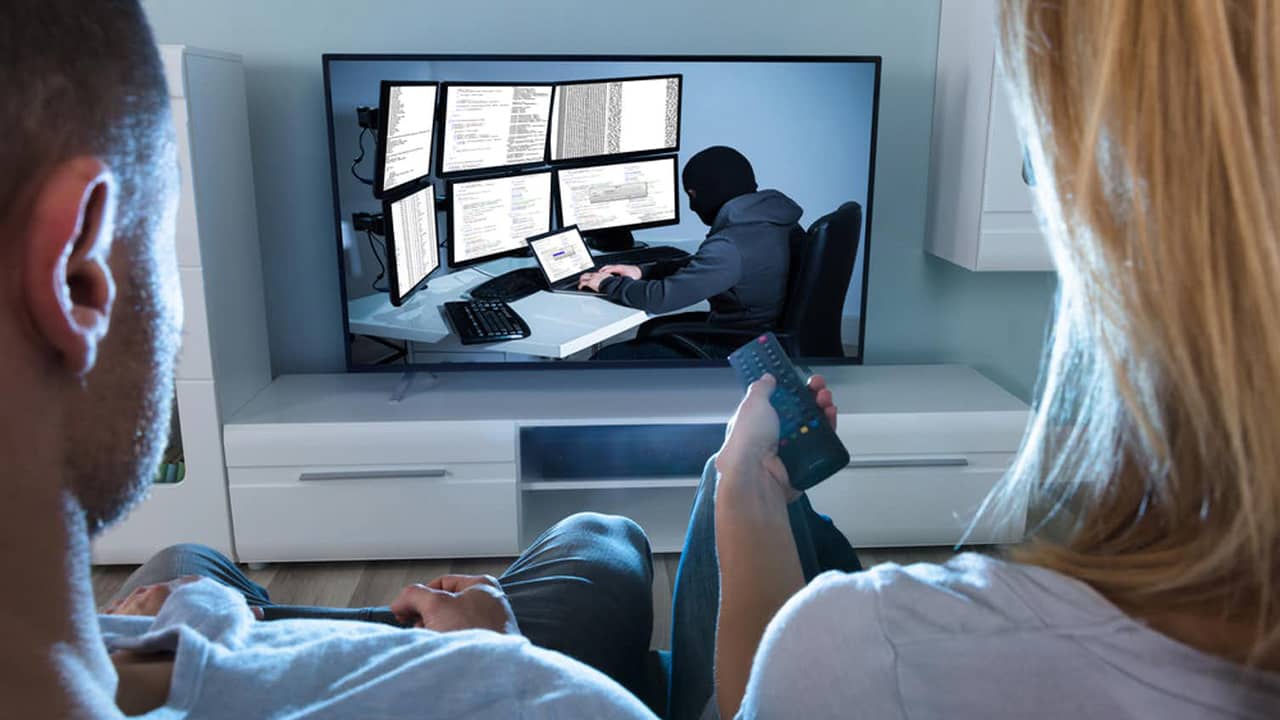 Television has a profound effect on its viewers. (Andrey_Popov)

Many viewers conform by measuring themselves against what they see on television, such as dress, relationships and conduct. In Miller’s words, television has “set the standard of habitual self-scrutiny.”

The kind of paranoid worry possessed by Smith in the novel – that any false move or false thought will bring the thought police – instead manifests in television viewers that Miller describes as an “inert watchfulness.” In other words, viewers watch themselves to make sure they conform to those others they see on the screen.

This inert watchfulness can exist because television allows viewers to watch strangers without being seen. Scholar Joshua Meyrowitz has shown that the kinds of programming which dominate U.S television – news, sitcoms, dramas – have normalized looking into the private lives of others.

Alongside the steady rise of “reality TV,” beginning in the ‘60s with “Candid Camera,” “An American Family,” “Real People,” “Cops” and “The Real World,” television has also contributed to the acceptance of a kind of video surveillance.

For example, it might seem just clever marketing that one of the longest-running and most popular reality television shows in the world is entitled “Big Brother.” The show’s nod to the novel invokes the kind of benevolent surveillance that “Big Brother” was meant to signify: “We are watching you and we will take care of you.”

For example, it might seem just clever marketing that one of the longest-running and most popular reality television shows in the world is entitled “Big Brother.” The show’s nod to the novel invokes the kind of benevolent surveillance that “Big Brother” was meant to signify: “We are watching you and we will take care of you.”

But Big Brother, as a reality show, is also an experiment in controlling and modifying behavior. By asking participants to put their private lives on display, shows such as “Big Brother” encourage self-scrutiny and behaving according to perceived social norms or roles that challenge those perceived norms.

The stress of performing 24/7 on “Big Brother” has led the show to employ a team of psychologists.

Television scholar Anna McCarthy and others have shown that the origins of reality television can be traced back to social psychology and behavioral experiments in the aftermath of World War II, which were designed to better control people.

In the “Candid Camera” show, cameras were concealed in places where they could film people in unusual situations. Milgram was fascinated with “Candid Camera,” and he used a similar model for his experiments – his participants were not aware that they were being watched or that it was part of an experiment.

Like many others in the aftermath of World War II, Milgram was interested in what could compel large numbers of people to “follow orders” and participate in genocidal acts. His “obedience experiments” found that a high proportion of participants obeyed instructions from an established authority figure to harm another person, even if reluctantly.

While contemporary reality TV shows do not order participants to directly harm each other, they are often set up as a small-scale social experiment that often involves intense competition or even cruelty.

And, just like in the novel, ubiquitous video surveillance is already here.

Closed-circuit television exist in virtually every area of American life, from transportation hubs and networks, to schools, supermarkets, hospitals and public sidewalks, not to mention law enforcement officers and their vehicles. 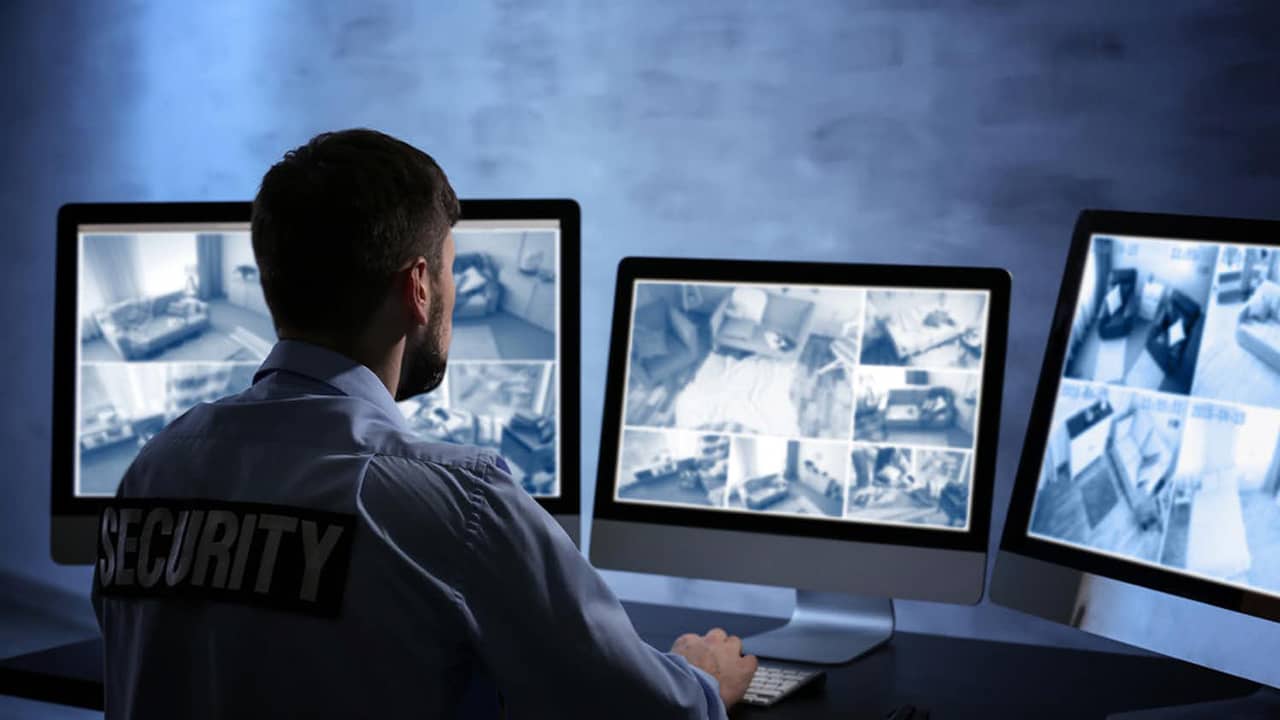 Video surveillance is part of our modern-day lives. (Africa Studio)

Surveillance footage from these cameras is repurposed as the raw material of television, mostly in the news but also in shows like “America’s Most Wanted,” “Right This Minute” and others. Many viewers unquestioningly accept this practice as legitimate.

The Friendly Face of Surveillance

Reality television is the friendly face of surveillance. It helps viewers think that surveillance happens only to those who choose it or to those who are criminals. In fact, it is part of a culture of widespread television use, which has brought about what Norwegian criminologist Thomas Mathiesen called the “viewer society” – in which the many watch the few.

For Mathiesen, the viewer society is merely the other side of the surveillance society – described so aptly in Orwell’s novel – where a few watch the many.