Tankers Targeted Near Strait of Hormuz Amid Iran-US Tensions 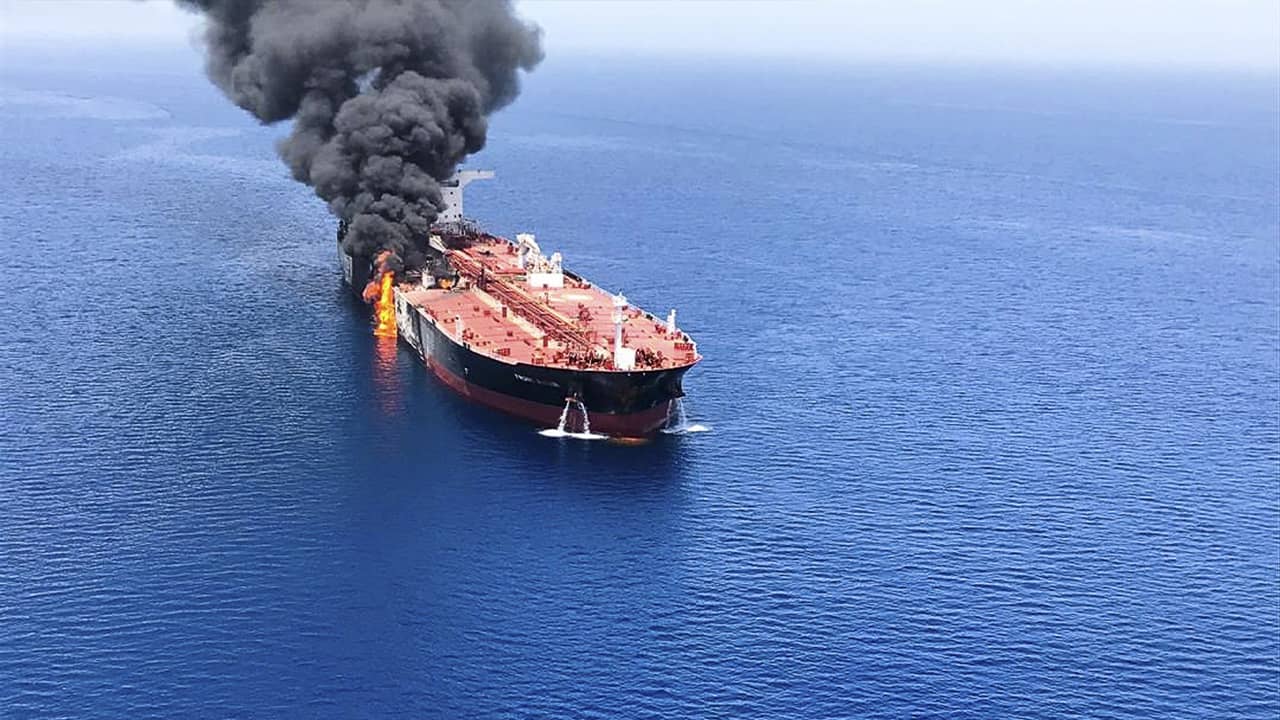 DUBAI, United Arab Emirates — Two oil tankers near the strategic Strait of Hormuz came under a suspected attack Thursday, setting one of them ablaze in the latest mysterious assault targeting vessels in a region crucial to global energy supplies amid heightened tension between Iran and the U.S.

The suspected attacks happened at dawn Thursday some 25 miles off the southern coast of Iran. The Norwegian-owned Front Altair, loaded with naptha from the United Arab Emirates, radioed for help as it caught fire. A short time later, the Japanese-owned Kokuka Courageous, loaded with methanol from Saudi Arabia and Qatar, also called for help.
The U.S. Navy sent a destroyer, the USS Bainbridge, to assist, said Cmdr. Joshua Frey, a 5th Fleet spokesman. He described the ships as being hit in a “reported attack,” without elaborating.
U.S. President Donald Trump “has been briefed on the attack,” said White House press secretary Sarah Sanders. “The U.S. government is providing assistance and will continue to assess the situation.”
Frontline, the firm that operates the Front Altair, told The Associated Press that an explosion was the cause of the fire. Its crew of 23 — from Russia, the Philippiines and Georgia — was safely evacuated to the nearby Hyundai Dubai vessel, it said.

BSM Ship Management said the Kokuka Courageous sustained hull damage and 21 sailors had been evacuated, with one suffering minor injuries.
Iranian state television said 44 sailors from the two tankers were transferred to an Iranian port in the southern province of Hormozgan. The Japanese owners of the Kokuka Courageous said, however, that its 21 Filipino sailors were aboard a U.S. warship. The discrepancy could not be immediately reconciled.


Tensions Have Escalated in Mideast

The Front Altair had been bound for Taiwan, the Kokuka Courageous for Singapore, according to the to the data firm Refinitiv.

Abe: More Tension Between Washington, Tehran Must Be Avoided

Thursday’s incidents came as Abe’s high-stakes diplomatic mission was underway in Iran. Japan’s Trade Ministry said the two vessels had “Japan-related cargo,” without elaborating.
After talks Wednesday with Iranian President Hassan Rouhani, Abe said any “accidental conflict” that could be sparked amid heightened tensions between Washington and Tehran must be avoided.
His message came hours after Yemen’s Iranian-backed Houthi rebels attacked a Saudi airport, striking its arrivals hall before dawn and wounding 26 people. A Saudi-led coalition has been fighting for over four years against the Houthis, whom United Nations experts and the West say receive arms from Iran. Tehran denies that.
A statement published by Khamenei’s website after Abe’s meeting with Khamenei suggested a tense exchange between the two.

“We have no doubt about your good will and seriousness, but … I don’t regard Trump as deserving any exchange of messages,” Khamenei reportedly told Abe. Khamenei also said Iran remained opposed to building atomic weapons, but offered a challenge to Trump.
“You should know that if we planned to produce nuclear weapons, America could not do anything,” said Khamenei, who has final say on all matters of state in Iran’s Shiite theocracy.
Abe later told journalists he stressed with Khamenei that Trump wanted to de-escalate the tensions.
“I frankly told that to Supreme Leader Khamenei as my opinion,” Abe said.
Related Topics:Iranoil tankersStrait of HormuzTensionU.S. NavyUnited Arab Emiratesvessels
Up Next