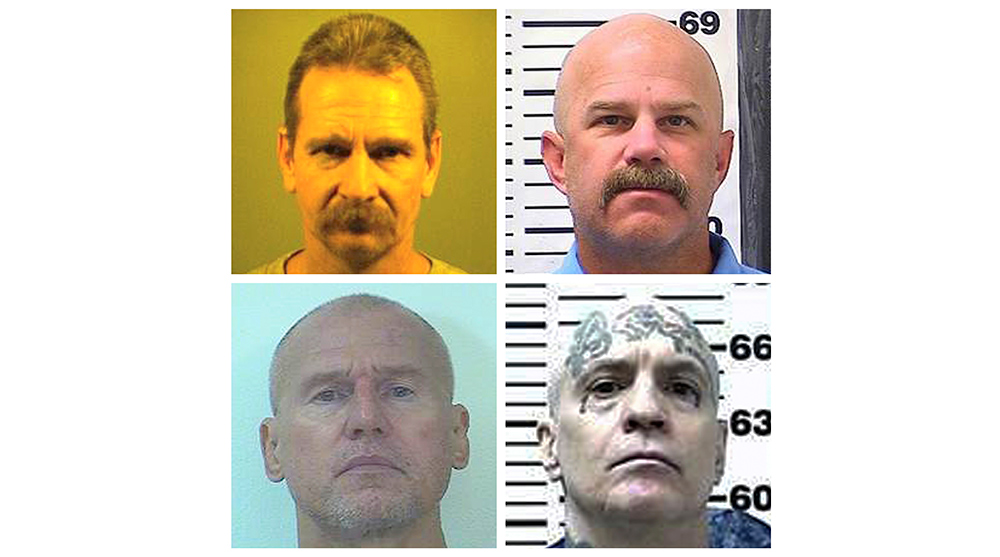 Sacramento-based U.S. attorney McGregor Scott called the charges “a very significant setback for one of California’s most notorious prison gangs.”
Prosecutors said one victim was a longtime leader of a rival black gang, killed just days after he was released from decades of solitary confinement. The other four were Aryan Brotherhood associates, killed for not following the rules.
Despite its racist philosophy, the Aryan Brotherhood had a drug smuggling partnership with the Mexican Mafia, prosecutors said.
Among the inmates charged is Daniel “Danny” Troxell, 66, a convicted killer serving a life sentence who was known for writing a federal complaint in 2009 that eventually led California to curb the use of solitary confinement. A correctional officer is seen at Pelican Bay State Prison near Crescent City in a 2011 file photo. Federal prosecutors say leaders of a notorious white supremacist gang have been charged with directing killings and drug smuggling from within California’s most secure prisons. (AP Photo/Rich Pedroncelli)

He formed an unusual cease-fire alliance with leaders of other blood-rival gangs to promote the complaint. It eventually led to hundreds of gang members and associates being released back into the general prison population, where investigators say some committed new crimes.

Prison officials said it’s difficult to keep up with the changing tactics of gangs behind bars.
“The gangs evolve, their techniques evolve and they change,” California Corrections Secretary Ralph Diaz said. “We will adapt and move along with them
Black Guerilla Family leader Hugo “Yogi” Pinell, a killer with ties to the 1960s black revolutionary movement, was among those released after 45 years in isolation.
Two Aryan Brotherhood associates, acting on the orders of gang leaders, killed the 71-year-old Pinell days after he was moved in 2015 to a Sacramento-area prison, prosecutors say.
Pinell became infamous as a member of San Quentin 6, helping slit the throat of prison guards during a failed 1971 escape attempt that left six dead.
Troxell and Pinell long denied being gang members. Most of the defendants did not yet have legal representation for the counts unveiled Thursday.
The charges also allege that cellmates Ronald “Renegade” Yandell, 56, and William Sylvester, 51, used smuggled cellphones to direct heroin and methamphetamine trafficking operations in California
Yandell, serving a life sentence for a double murder, is described as one of the gang’s three-member leadership commission, as is Troxell.
La Palma attorney Kevin Macnamara is charged with trying to smuggle methamphetamine, tobacco and cellphones. Guards reported finding three phones, plastic wrappers and power cables concealed in the seat cushion of Macnamara’s wheelchair.
Macnamara, 39, did not immediately respond to an email seeking comment and the voicemail box on his phone was full.