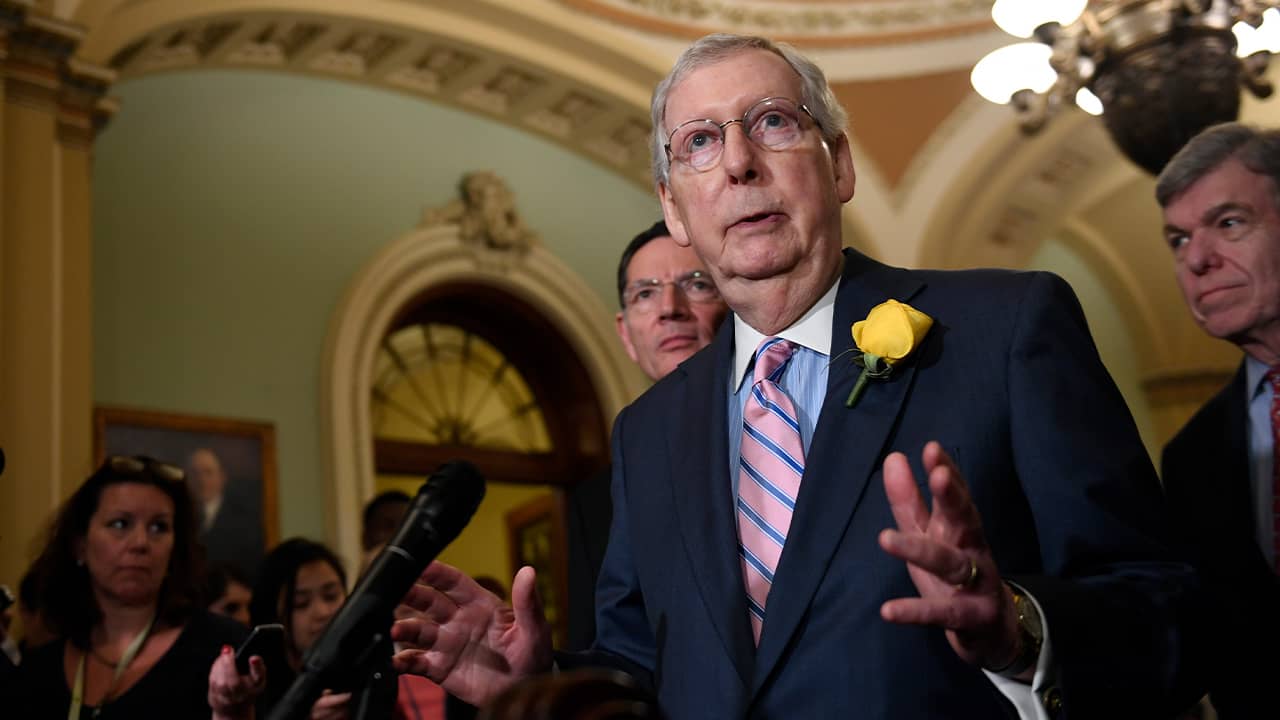 WASHINGTON — In a rare confrontation, Republican senators are declaring deep opposition to President Donald Trump’s threatened tariffs on all goods coming into the U.S. from Mexico. But it’s unclear they have the votes to stop him, and Trump said they’d be “foolish” to try.
All sides, including officials from Mexico meeting with Trump negotiators in Washington this week, remain hopeful that high-level talks will ease the president away from his threat. But with the tariffs set to start next Monday — and Trump declaring them “more likely” than not to take effect — fellow Republicans in Congress warned the White House they are ready to stand up to the president.
The public split and looming standoff over 5% tariffs on all goods imported from Mexico revealed a fundamental divergence in values between the president and his party. Trump uses tariffs as leverage to get what he wants, in this case to force Mexico to do more to halt illegal immigration. For Republicans, tariffs are counter to firmly rooted orthodoxy and viewed as nothing more than taxes they strenuously oppose.
Senate Majority Leader Mitch McConnell said Tuesday with understatement, “There is not much support in my conference for tariffs, that’s for sure.”
At a lengthy closed-door lunch meeting at the Capitol, senators took turns warning Trump officials there could be trouble if the GOP-held Senate votes on disapproving the tariffs. Congressional rejection would be a stiff rebuke to Trump, even more forceful than an earlier effort to prevent him from shifting money to build his long-promised border wall with Mexico.

Fears Over What Tariffs Would Do to Livelihoods of Ordinary Americans

“Deep concern and resistance,” is how Sen. Ted Cruz of Texas characterized the mood. “I will yield to nobody in passion and seriousness and commitment to securing the border, but there’s no reason for Texas farmers and ranchers and manufacturers and small businesses to pay the price of massive new taxes.”


“Deep concern and resistance. I will yield to nobody in passion and seriousness and commitment to securing the border, but there’s no reason for Texas farmers and ranchers and manufacturers and small businesses to pay the price of massive new taxes.” — Sen. Ted Cruz
Ron Johnson of Wisconsin, who was among the senators who spoke up, said, “I think the administration has to be concerned about another vote of disapproval. … I’m not the only one saying it.”
The outcome would be uncertain — Trump could try to veto a disapproval resolution as he did before. But many Republicans who voted against Trump earlier this year actually supported his ultimate goal of building the border wall. They were just uneasy with his executive reach to do it. Now, the president doesn’t have anywhere near the same backing for the tariffs.
The GOP opposition is grounded in fears over what Trump’s tariffs would do to the livelihoods of ordinary Americans. Senators worry they would spike U.S. consumers’ costs, harm the economy and imperil a major pending U.S.-Mexico-Canada trade deal.
With jitters running high, Federal Reserve Chairman Jerome Powell said Tuesday he’s prepared to respond to protect the economy, and stocks rallied on that signal that the Fed will likely cut interest rates later this year.
Mexico is concerned about the tariffs as well, but top officials seemed optimistic about a resolution.

“By what we have seen so far, we will be able to reach an agreement,” Foreign Minister Marcelo Ebrard said during a news conference at the Mexican Embassy in Washington. “That is why I think the imposition of tariffs can be avoided.”
Trump, during a press conference in London, offered mixed messages.
“We’re going to see if we can do something,” he said on the second day of his state visit to Britain.
“But I think it’s more likely that the tariffs go on,” he said. He also said he doubted Republicans in Congress would muster the votes against him. “If they do, it’s foolish.”
The Mexican officials arrived in Washington over the weekend as Mexico launched a diplomatic counteroffensive and fresh negotiations. On Tuesday, Mexico’s trade negotiator Jesus Seade was meeting with U.S. Trade Representative Robert Lighthizer, and Ebrard will meet Wednesday with Secretary of State Mike Pompeo.
Republican senators are hopeful those talks will prevent the tariffs. But if negotiations should fail, the lawmakers warn they may have no choice but to take action to stop Trump.
“Our hope is the tariffs will be avoided,” McConnell said.


Lawmakers Say They Can Quickly Vote on a Resolution

Lawmakers and business allies worry the tariffs will derail the long-promised United-States-Mexico-Canada trade deal— a rewrite of the North American Free Trade Agreement that Trump campaigned against and promised to replace.
Sen. Chuck Grassley, R-Iowa, chairman of the Finance Committee, told reporters Tuesday the tariffs make passage of USMCA “more difficult.”
Questions remained, meanwhile, over how, exactly, the president would invoke executive authority to slap tariffs on the Mexican goods — and what Congress could do to block him.
Trump has indicated he will rely on the International Emergency Economic Powers Act, a national emergency executive action he can take without congressional approval.
But lawmakers say they can quickly vote on a resolution to disapprove. That’s what happened earlier this year when Congress, stunned by Trump’s claim of executive power, tried to block him from taking funds for the border wall with Mexico. Congress voted to disapprove of Trump’s actions, but the president vetoed the resolution.

This time, Republicans warn the numbers could be higher against the president — possibly a veto-proof majority in the Senate. But it’s unclear the president could be blocked in the House where Republicans may be less likely to oppose him.
Democrats and some Republicans doubt the tariffs will ever take effect. Senate Democratic leader Chuck Schumer said Tuesday that “Trump has a habit of talking tough and then retreating.”
Trump struck back against Schumer on Twitter, insisting the tariff threat was “no bluff.”

Can you imagine Cryin’ Chuck Schumer saying out loud, for all to hear, that I am bluffing with respect to putting Tariffs on Mexico. What a Creep. He would rather have our Country fail with drugs & Immigration than give Republicans a win. But he gave Mexico bad advice, no bluff!

Earlier Tuesday, Trump claimed “millions of people” are entering the U.S. through Mexico and criticized congressional Democrats for not passing new laws. He said, “Mexico should not allow millions of people to try and enter our country.”
It is unclear what more Mexico can do and what would be enough to satisfy Trump on illegal immigration, a signature issue of his presidency.
The United States has not presented concrete benchmarks to assess whether the U.S. ally is sufficiently stemming the migrant flow from Central America. Mexico calls the potential tariffs hurtful to the economies of both countries and useless to slow the northbound flow of Central American migrants.