Police Chief to Mayor. Lessons from Those Who Made the Leap.

A police chief being elected as mayor of their city is not unprecedented — but doesn’t happen often.
Recent examples include San Diego and Tampa, Fla., where retired chiefs survived crowded primaries before going forward to win their respective run-off.
Fresno Police Chief Jerry Dyer, who is scheduled to retire from the department in October, is hoping to become the next to make the transition.
He announced his bid for Fresno’s top political office last week (May 29) and is running in a field of four candidates. Others may join the race before the early December filing deadline.

Jerry Sanders spent a total of 26 years with the San Diego Police Department, his last six as chief. In 2005, he won a special election to replace a mayor who had resigned under a cloud of scandal. Sanders went on to serve two full terms leading the city.
Tampa’s Jane Castor was sworn in as Tampa’s mayor just last month after winning an April runoff. She served as the city’s police chief from 2009 through 2015, capping a 21-year law enforcement career.
Both San Diego and Tampa have the same strong mayor form of government as Fresno, meaning the mayor serves as the city’s chief executive.

Preparation for Life in Politics

Sanders said his time as chief helped ready him for the mayor’s role.
“It gave me a sense of perspective more than anything else. I knew what it was like to be out there in the field, what it was like to make tough decisions as both a police officer and as a chief. What I found was that nothing I was going to find in office was going to be nearly as bad as some of the things that I’ve been through,” Sanders said. Castor says being chief means you already know your city intimately.
“You know every single neighborhood, inch by inch. You know what the issues are out in the particular neighborhood, who to contact, who the informal leaders are out in the community. Also, by virtue of working in the city for so long, you have a knowledge of all of the departments and how the city, as an organization, runs,” Castor said.
With 18 years as Fresno’s police chief, Jerry Dyer has an extensive public record. Supporters applaud his efforts to crack down on gangs. Critics bring up the black marks on Dyer’s career, such as the 2015 arrest and subsequent conviction of his deputy chief, Keith Foster, on drug trafficking charges.
How should Dyer handle such criticism during his political campaign?
Sanders recalled an incident from his policing career that followed him as he ran for mayor. As a SWAT commander, he oversaw police response to a 1984 mass shooting at a McDonald’s restaurant in the community of San Ysidro near the U.S.-Mexico border. San Diego police were criticized for taking 77 minutes to stop a lone gunman who killed 21 people and wounded 19 more.

“When you run for office, literally anything’s fair game. People say stuff that has no relationship to the truth or they slant it. You just can’t take any of it personally…” — Jerry Sanders, former San Diego mayor and police chief, on addressing past controversies while running for political office.

“Some criticism came up from some in the Latino community right after that occurred. All I could do is talk about the facts and the investigation that was done,” Sanders recalled.
“You have to stick to the issues that are important to the electorate,” he said. “You are always going to have criticism because everything’s fair game when you run for office.” During her mayoral campaign, Castor had to answer questions about problems with the DUI unit in her police department and a controversial ticketing program for bicyclists. Critics say blacks were unfairly targeted.
She advises Dyer to respond to past issues with honesty.
“I just handled it upfront and I apologized for any mistakes that had been made in the past. I also pointed out that we were one of the safest cities in the nation and that our police department and our community had a very good working relationship,” Castor said.
She acknowledged that in any large department, there always will be controversies.
“When you have 1,300 employees, and you deal with the issues that law enforcement is called to deal with, then there are going to be some mistakes made. But those mistakes were ones of the heart. Every decision that I made was in the best interest of our community,” she said.

Addressing Past Controversies as a Candidate

At his news conference last week to announce his run, a dozen or so protesters gathered and chanted anti-Dyer slogans. Others on social media had created flyers and memes bringing up Dyer’s admitted past relationship with an underage girl in the 1980s, along with the Foster case and discrimination lawsuits against the police department.
Castor knows Dyer well, having both served on the Major Cities Chiefs Association.

At his news conference last week to announce his run, a dozen or so protestors gathered and chanted anti-Dyer slogans. Others on social media had already created flyers and memes bringing up Dyer’s admitted past relationship with an underage girl in the 1980s, along with the Foster case and discrimination lawsuits against the police department.

Her advice: “Stay positive and focus on the skill, knowledge and ability that you bring to the position. Also, ensure that you are focusing on the issues that matter to your community,” she said.
Sanders’ advice for Dyer — don’t take criticism personally.
“When you run for office, literally anything’s fair game. People say stuff that has no relationship to the truth or they slant it. You just can’t take any of it personally, because it just doesn’t it doesn’t do you any good to do that,” Sanders said.

In Fresno, the police department falls under the jurisdiction of the mayor.
How did the chiefs-turned-mayors handle that critical relationship?
“I expected the chief to run the department and I expected him to do a good job,” Sanders said. “I just kind of stayed out of it as much as I could. I think that a lot of times, the inclination is that if you come from someplace you know a lot about it, you’re going to start dabbling in it.  I didn’t want to do that at all because I didn’t think that would be appropriate.” 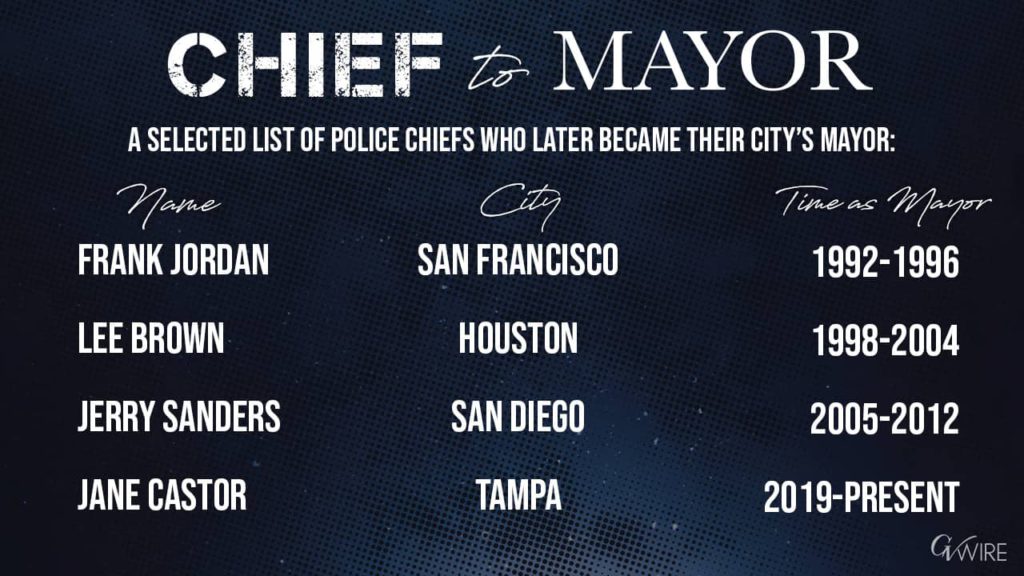 Castor said she needed autonomy from her mayor when she was chief.
“Law enforcement is a very unique culture,” she said. “At the time, I had been a police officer for 26 years and I told (then-mayor Pam Iorio) I didn’t fully understand the culture and there was no way that she did. So, she needed to allow me to run the department. And if you didn’t like the way I ran the department, then she needed to find another chief,” Castor said.
She said she plans to oversee the police in the same manner — letting the chief run it.
“I have way too much to do to try to be running the police department,” Castor said.

Unlike Dyer, neither Sanders nor Castor ran for office in their city while still serving as its police chief.
Sanders served for close to six years as CEO for the local United Way and American Red Cross after retiring as chief. He said his time working in the private sector prior to serving as mayor was a plus.

“That kind of rounded my career a little bit — at least in people’s eyes,” Sanders said.
Castor worked as a consultant between her time in law enforcement and running for office. She said the time allowed her to serve on a number of public boards, dealing with civic issues ranging from mental health to transportation.
“I got the opportunity to get a more deeply involved in issues that were that were important to me,” Castor said.