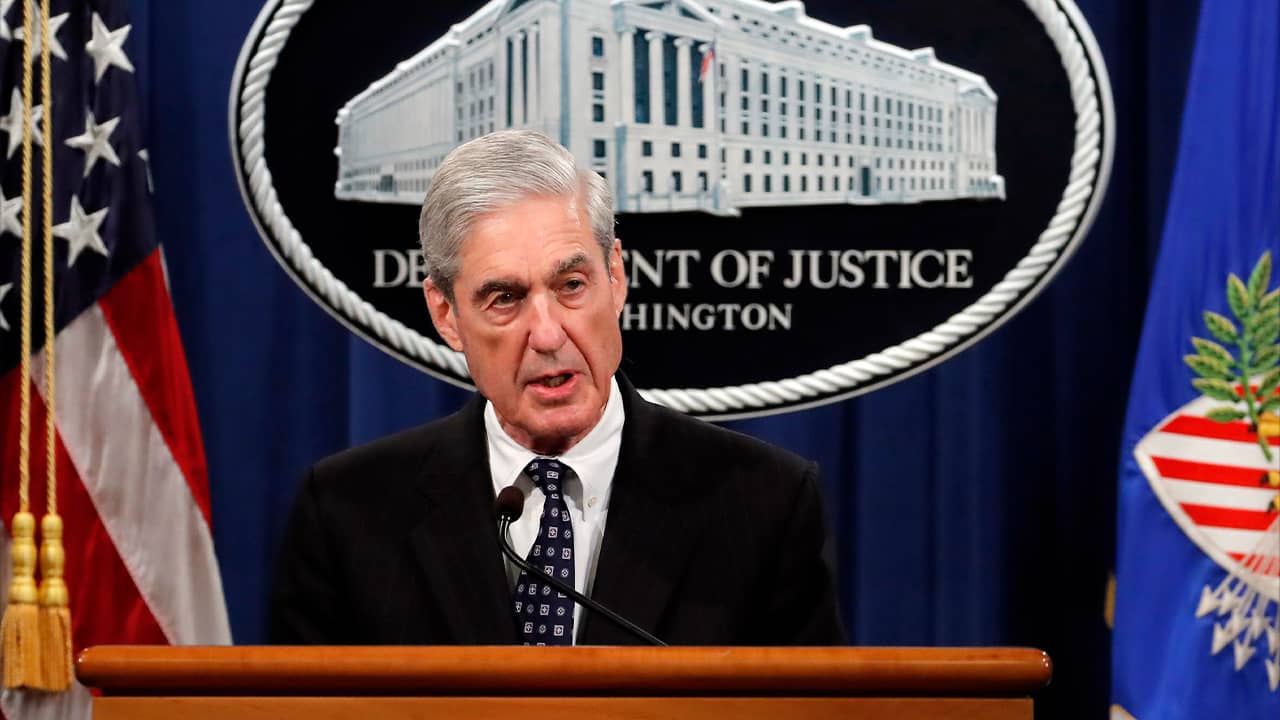 WASHINGTON — Special counsel Robert Mueller said Wednesday he was legally barred from charging President Donald Trump with a crime but pointedly emphasized that his Russia report did not exonerate the president. If he could have cleared Trump of obstruction of justice he “would have said so,” Mueller said.

The special counsel’s remarks, his first in public since being tasked two years ago with investigating Russian interference to help Trump win the 2016 presidential election, stood as a strong rebuttal to Trump’s repeated claims that he was exonerated and that the inquiry was a “witch hunt” that found crime.

Mueller made clear he was barred from indicting a sitting president and that it was Congress’ job to hold the president accountable for any wrongdoing.

Under pressure to testify before Congress, Mueller did not rule it out. But he seemed to warn lawmakers that they won’t be pulling more detail out of him. His report is “my testimony,” Mueller said, and he won’t go beyond what is written in the report.

Trump Falsely Claimed That Report Cleared Him of Obstruction of Justice

He strongly indicated that Congress is the proper venue, not the criminal justice system, for deciding whether action should be taken against the president in connection with allegations that Trump and aides obstructed the investigation.

Trump, who has repeatedly and falsely claimed that Mueller’s report cleared him of obstruction of justice, modified that contention somewhat shortly after the special counsel’s remarks. He tweeted, “There was insufficient evidence and therefore, in our Country, a person is innocent. The case is closed!”

Mueller’s comments, one month after his report on Russian efforts to help Trump win the presidency, appeared intended to both justify the legitimacy of his investigation against complaints by the president and to explain his decision to not reach a conclusion on whether Trump had obstructed justice.

Indicting Trump, he said firmly, was “not an option” in light of a Justice Department legal opinion that says a sitting president cannot be charged. But, he said, the absence of a conclusion should not be mistaken for an exoneration of the president.

“The opinion says the Constitution requires a process other than the criminal justice system to formally accuse a sitting president of wrongdoing,” Mueller said, referring to the Justice Department legal opinion. That would shift the next move, if any, to Congress, and the chairman of the House Judiciary Committee, which would investigate further or begin any impeachment effort, commented quickly.

It falls to Congress to respond to the “crimes, lies and other wrongdoing of President Trump – and we will do so,” said New York Rep. Jerrold Nadler.

Trump has blocked the committee’s subpoenas and other efforts to dig into the Trump-Russia issue, insisting Mueller’s report has settled everything.

Mueller’s statement came amid demands for him to testify on Capitol Hill about his findings and tension with Attorney General William Barr over the handling of Mueller’s report.

That report found no criminal conspiracy between the Trump campaign and Russia to tip the outcome of the 2016 presidential election in Trump’s favor over Democrat Hillary Clinton. But it also did not reach a conclusion on whether the president had obstructed justice.

“Under longstanding department policy, a president cannot be charged with a federal crime while he is in office. That is unconstitutional. Even if the charge is kept under seal and hidden from public view that, too, is prohibited.” — Robert Mueller

Barr has said he was surprised Mueller did not reach a conclusion on whether the president had criminally obstructed justice, though Mueller in his report and again in his public statement Wednesday said that he had no choice. Barr decided on his own that the evidence was not sufficient to support an obstruction charge against Trump.

“Under longstanding department policy, a president cannot be charged with a federal crime while he is in office,” Mueller said. “That is unconstitutional. Even if the charge is kept under seal and hidden from public view that, too, is prohibited.”

Mueller, for his part, complained privately to Barr that he believed a four-page letter from the attorney general summarizing his main conclusions did not adequately represent his findings.

Mueller also appeared to put Congress on notice that he would not break new ground in the event he testifies on Capitol Hill.

“I do not believe it is appropriate for me to speak further about the investigation or to comment on the actions of the Justice Department before Congress.”