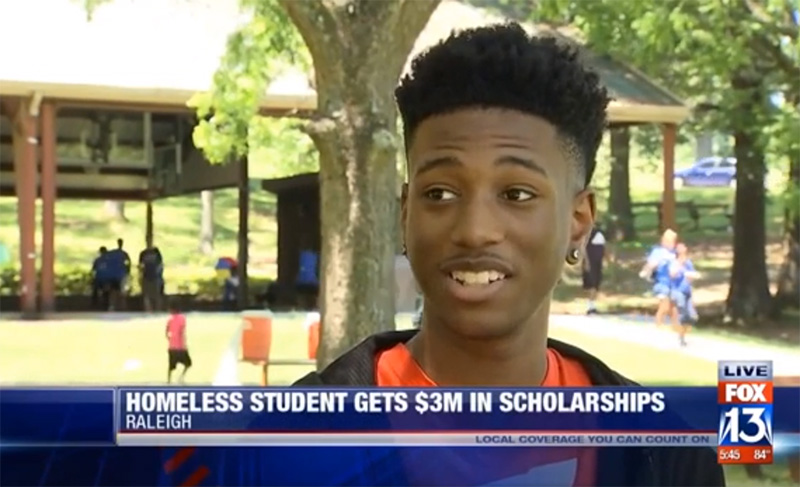 A high school valedictorian earned more than $3 million in college scholarships, even though he was homeless.

Tupac Mosley received more than 50 scholarships before he graduated this month from Raleigh Egypt High School in Memphis, Tenn. All the while, he was living at a campsite and had no fixed address.

Mosley graduated with a 4.3 grade-point average and plans to attend Tennessee State University and major in electrical engineering.

He gave much of the credit for his college trajectory to For the Kingdom, a camp that helps disadvantaged young people in the Memphis area. The nonprofit organization gave Mosley a place to live after his father died.

“After my father passed, (my family) fell behind on bills and we ended up getting evicted from our home February 21 of this year,” Mosley told television station Fox 13 in Memphis. “So we went to different homes … and we were blessed to have For the Kingdom.”

The organization says its goal is to aim urban youngsters in the right direction through activities at its camp and retreat. After graduation, Mosley was getting ready to leave the camp and move into a permanent home.

In his valedictorian speech, he thanked teachers and fellow students for their support, and expressed surprise at the level of scholarship offers he had earned.

“When I heard that I got $3 million, I was more than elated and excited and astonished that it was that much,” Mosley said.

“I knew that I had to make them proud. I knew that their investment was worth it that and just show them that, yes, everything that you poured into me was worth $3 million and counting.”

Cholesterol Improves in US Kids Despite High Obesity Rates