Is He the Only Dem in America Not Running for President?

It wasn’t as epic as Bob Dylan’s 115th Dream, but a weird scenario invaded my sleep the other night.

I’m in a chair in the Ed Sullivan Studio in New York next to the desk where comedian Stephen Colbert holds court. He places his right index finger just below his nose, as he does when starting off a bit, then adjusts his glasses.

“Speaking of the 2020 presidential race, I’ve found the only Democrat in America who isn’t running,” Colbert says.

He extends his right hand toward the audience, opening and closing his fingers, and continues:

“He’s from Fresno, California. We’ve checked him out. He’s filed no papers. The friendly county clerk there confirmed he’s been a registered Democrat for 47 years. You know, I didn’t think they had any in Fresno. And he passed the polygraph we gave him.”

No Escape in This Dream

There are dreams where you know it’s a dream. This wasn’t one of them. I wanted to bolt, but my legs were paralyzed. I wanted to speak, but no words came out.

“Admit it, Bill, this is a publicity stunt. You’re trying to turn this into a Fox News gig as the token Democrat, right?”

“We looked it up. At last count, there were 44 million registered Democrats in America. You’re the only one not running. Not afraid of Trump, are you? Maybe you’re afraid of Putin? Don’t want to get tossed off a balcony, do we?”

“What, are you un-American? This country is founded on the noble idea that anyone, no matter how humble their roots, can grow up and become president!”

“We looked it up. At last count, there were 44 million registered Democrats in America. You’re the only one not running. Not afraid of Trump, are you? Maybe you’re afraid of Putin? Don’t want to get tossed off a balcony, do we?”

Finally, my brain synched with my vocal cords: “No disrespect, Stephen, but you sound like an old John Mellencamp song.”

“So, you can talk. That’s good, but leave the jokes to me. Let me ask you this, why not run? Everyone else is.”

“That’s an excuse, not a reason. Do you think Bill de Blasio is electable? He’s as popular as a rat at a subway pizza party. For heaven sakes, he’s the mayor of New York City and he roots for the Boston Red Sox.

“You think Seth Moulton or Marianne Williamson is electable? You think they can raise a dime? Announce tonight, right here on the show, and I’ll manage your campaign.”

Pick a Platform, Any Platform

An uncomfortable silence filled the set during the break. Colbert did more of those things with his hands and glasses before saying, “How about it, Bill? Right now, I’m thinking you’re just another rebel without a cause.” 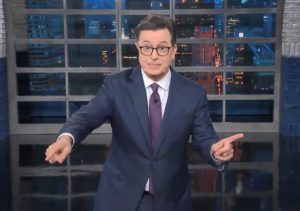 “Sorry, no isn’t an acceptable answer. There can be no holdouts. America needs you. America won’t rest. It’s our manifest destiny that every last Democrat runs against Trump.”

“Platform? Does it matter? Pick one: climate change, immigration, health care for all, education, transportation, the living wage, appointing liberal judges. If you want, use them all. Hold on, I’ve got the winner!”

“Promises. Lots of promises. Then we transition into divide-and-conquer and finish up with good old-fashioned fear-mongering. It worked for Trump, it’ll work for you! We position you as the Democratic Trump. Make America Great Again. But this time for everybody. We’re performing magic here. Theme. We do need a theme. Give me a second. I’ve got it. Saving the Best for Last!

“Think of the publicity. In a week, you’ll have more name ID than Steve Bullock, Michael Bennett, John Delaney, Eric Swalwell, and John Hickenlooper put together. I’m out on a limb here, but I’m thinking you make the main debate stage. No kids table for you. Worst case, you end up VP!”

“Stephen, I appreciate all the thought you’re putting into this. It’s really impressive. But I have no interest in being president. I don’t need the stress. I want to hang on to the few hairs left on my head. And, for the record, I’m not afraid of Putin.”

“Sorry, no isn’t an acceptable answer. There can be no holdouts. America needs you. America won’t rest. It’s our manifest destiny that every last Democrat runs against Trump.”

A Dream This Scary Deserves an Epilogue

I woke up in a puddle of sweat, rolled to one side and looked at the clock — 3:45 a.m. Unable to get back to sleep, I contemplated the theory there’s a bit of truth in every dream.

The Democrats have twice as many presidential candidates as Christ had apostles.

The way things are going, I really could end up the only Democrat in America not running for president.

To each and every one of them, I offer the last words of Dylan’s 115th Dream: “Good luck.”

Walters: California Gets a Hollow Victory in Tax Battle