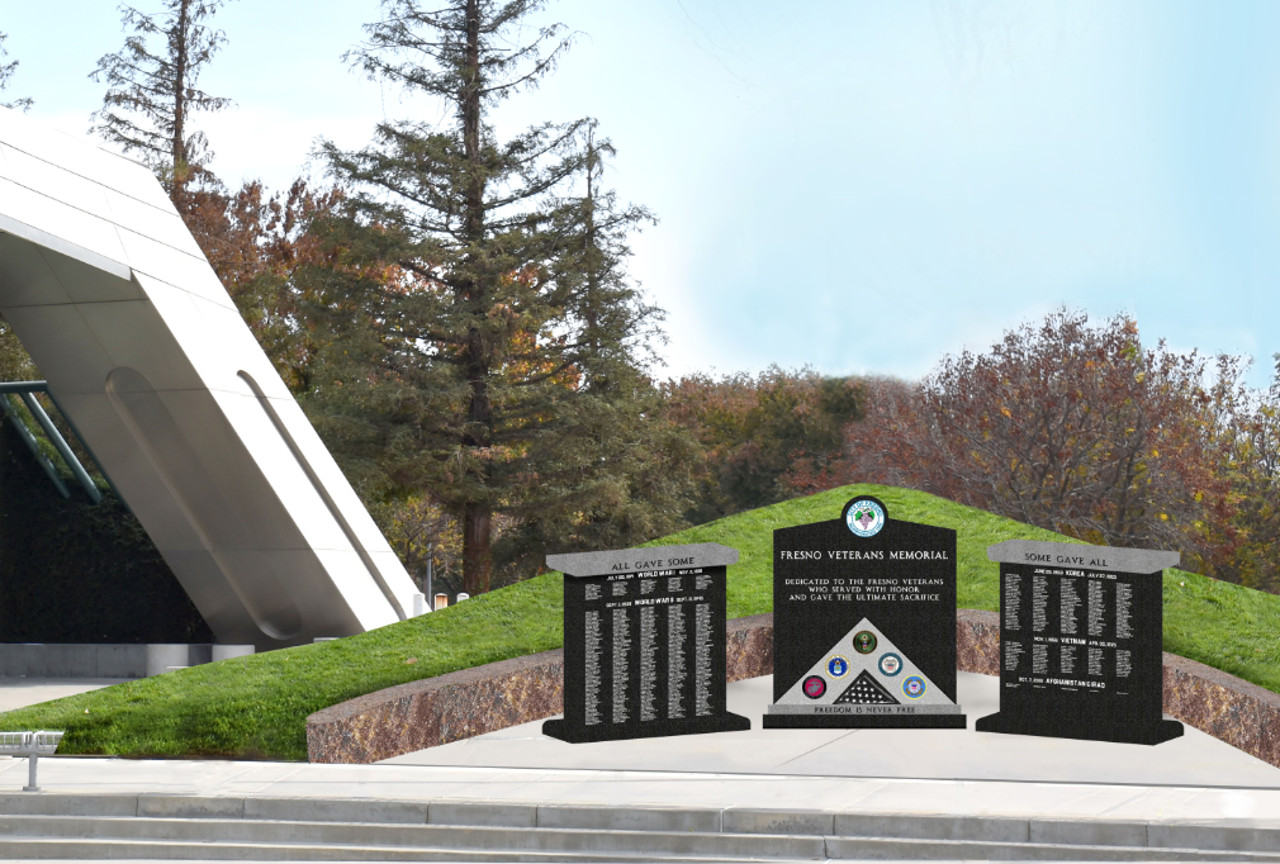 At last week’s city council meeting, Bredefeld announced that $75,000 has been raised for the already-approved memorial. The goal is $120,000.

The council approved a slight change in design. Instead of one continuous piece of concrete, it will be three free-standing pieces.

Bredefeld shared information on how to donate:

Checks are payable to the Fresno Revitalization Corp. and in the memo line write Veterans Memorial Donation.  This is a tax-deductible donation and the tax ID # is 770355251.  Bredefeld’s office will come and pick up a check or it can be mailed to his office at the following address:

Politics 101 is also hearing a police memorial may go up in front of City Hall.

The Fresno council also approved, 6-0, to initiate a change to the city code to allow motels to fall into the city’s rental inspection program.

The bill’s main sponsor, Miguel Arias, said some of Fresno’s motels are notorious for drugs, prostitution, and unsanitary conditions.

Arias said fees for the inspections will be established once the code is written. The process could take six months.

Last week, the Clovis City Council heard a staff presentation about the effects of a housing bill out of Sacramento, SB 50.

The bill would allow homebuilders to construct more units per acre than what a city’s plan may mandate.

Clovis could qualify based on its status of quality jobs and schools. Councilmembers expressed concern that it could change the character of the city. Councilmen Bob Whalen and Vong Mouanoutoua cautioned against outright rejecting such a bill.

Council delayed a decision on whether to reject SB 50 (as staff recommended) until tonight (May 20).

However, the decision may be moot. The Senate appropriations committee killed the bill for the year, refusing to pass it out of committee.

During a brief discussion of the issue at its May 16 meeting, commissioner Brian Hatch asked enforcement division chief Galena West for an update of the Payne case.

“Mr. Payne has been communicating with us, but we have yet to receive any filings or anything,” West said.

You can watch video of the exchange below.

Payne faces 21 counts of violating campaign finance law, ranging from failing to file required documents in a timely fashion (if at all), and misuse of campaign funds.

Talented Fresno musicians will soon benefit from a federal grant.

The Youth Orchestras of Fresno received a $10,000 award from the National Endowment for the Arts.

YOOF takes interested musicians from across the region and molds them into top-flight players.

“We are thrilled to be the recipients of our sixth NEA grant. This kind of funding has allowed us to take on a number of imaginative and daring projects we might not otherwise have been bold enough to undertake,” Julia Copeland, executive director of the Youth Orchestras of Fresno, said in a news release. “This year we are excited that the funding will go to our wonderful FOOSA summer festival.”

The next series of concerts takes place June 13-23 at Fresno State and other locales. Take time to catch a concert. It’s worth it.

More information can be found here.

Schools Turn to Apps, Other Tech to Guard Against Shootings