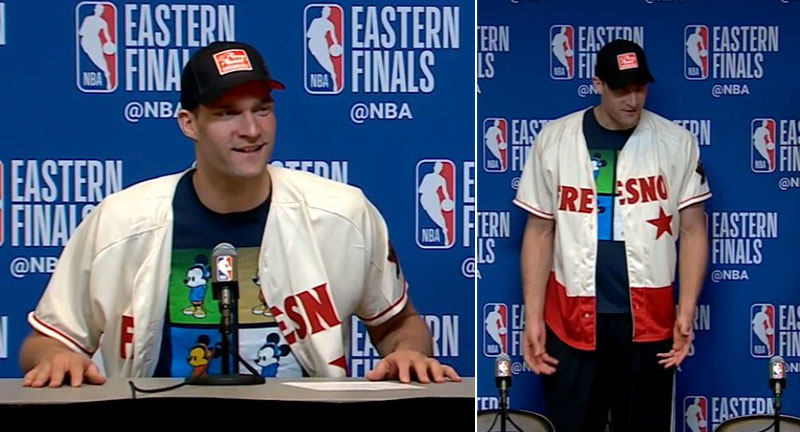 Brook Lopez was a beast in the Milwaukee Bucks’ victory over the Toronto in the opening game of the NBA Eastern Conference Finals. After the game, he was a bear.

A Grizzly, to be precise. Lopez, who was raised in Fresno and attended San Joaquin Memorial High with Robin, his twin brother and fellow NBA pro, wore a Fresno Grizzlies jersey to a post-game news conference.

Related Story: Who’s Made More in the NBA: Curry Brothers or Lopez Twins?

Lopez scored 29 points, a career high for playoff games in his 11-year career, and grabbed 11 rebounds in Milwaukee’s 108-100 victory over the Raptors on the Bucks’ home court. He also blocked four shots.

The 7-footer known as “Splash Mountain” had been in a shooting slump during the playoffs, making only 28% of his three-point shots. Wednesday night, he went 4-for-11, making three of his last five.

I’m having the time of my life at home watching Facts of Life reruns I swear to God
…
…
… https://t.co/rXAl0hbKTu pic.twitter.com/EPqIScINcy