SAN FRANCISCO — The question comes up over and over, with extremist material, hate speech, election meddling and privacy invasions. Why can’t Facebook just fix it?

It’s complicated, with reasons that include Facebook’s size, its business model and technical limitations, not to mention years of unchecked growth. Oh, and the element of human nature.

The latest revelation: Facebook is inadvertently creating celebratory videos using extremist content and auto-generating business pages for the likes of ISIS and Al Qaida. The company says it is working on solutions and the problems are getting better. That is true, but critics say better is not good enough when mass shootings are being live-streamed and online mobs are spreading rumors that lead to deadly violence.

As new problems crop up, Facebook’s formula has been to apologize and promise to make changes, sometimes also noting that it did not anticipate how malicious actors could so readily misuse its platform. More recently, the company has also emphasized just how much it is improving, both technically in its use of artificial intelligence to detect problems and in terms of focusing more money and effort on fixing them.

“After making heavy investments, we are detecting and removing terrorism content at a far higher success rate than even two years go,” Facebook said Wednesday in response to the revelations about the auto-generated pages. “We don’t claim to find everything, and we remain vigilant in our efforts against terrorist groups around the world.”

It has seen some success. In late 2016, CEO Mark Zuckerberg infamously dismissed as “pretty crazy” the idea that fake news on his service could have swayed the election. He later backtracked, and since then the company has reduced the amount of misinformation shared on its service, as measured by several independent studies.

Zuckerberg has also, by and large, avoided similar gaffes by conceding mistakes and delivering apologies to the public and to lawmakers.

But even as the company bats down one problem, others pop up. The reason for that might be baked into its DNA. And that’s not just because its business model relies on as many people as possible using it as much as possible, leaving behind personal details that can then be targeted by advertisers. 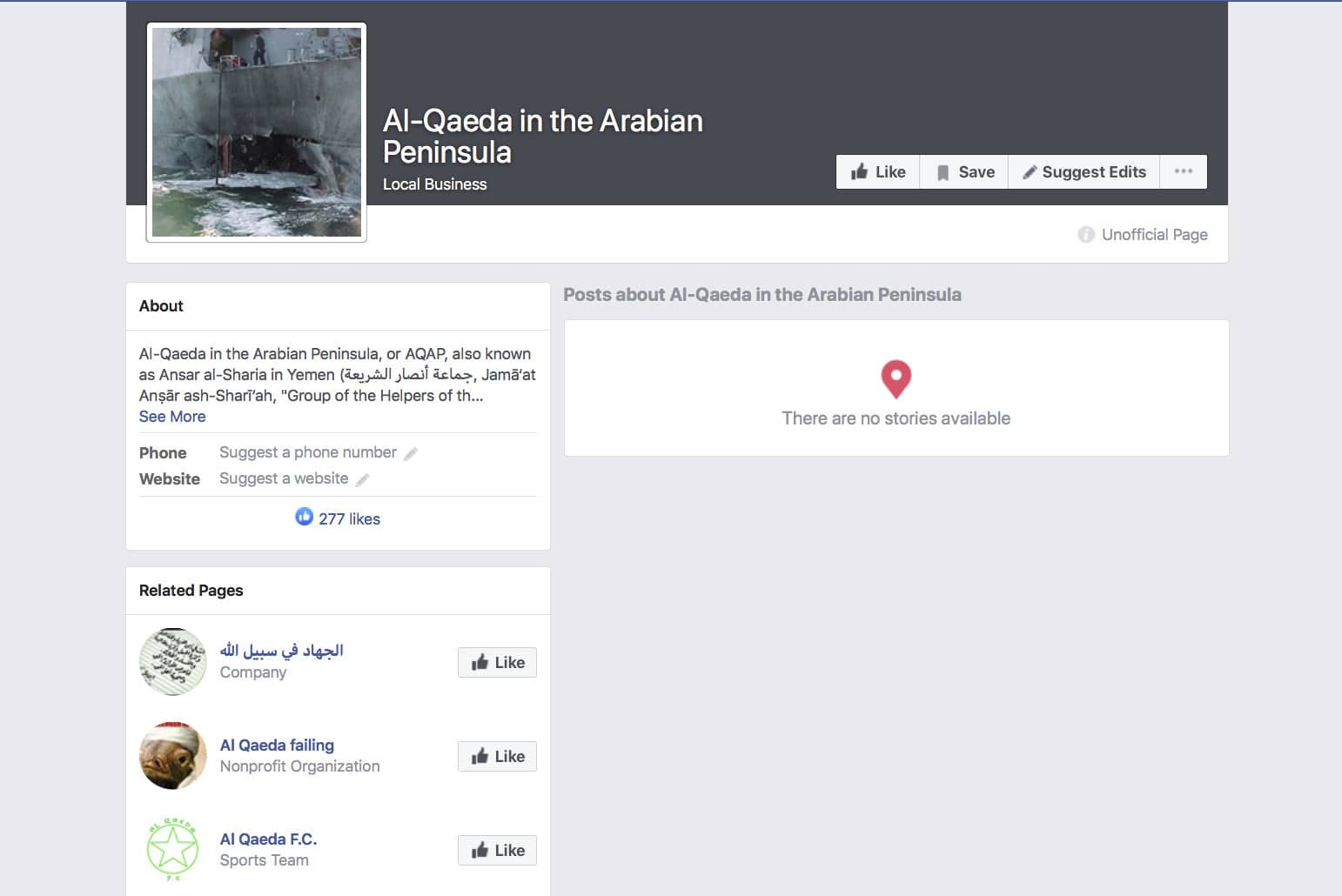 A Facebook auto-generated page for a group identifying itself as the terror group “Al-Qaeda in the Arabian Peninsula” displays a photo of the bombed U.S. Navy warship USS Cole. The page was still live as of May 7, when the screen grab was made. Facebook says it has robust systems in place to remove content from extremist groups, but a sealed whistleblower’s complaint reviewed by the AP says banned content remains on the web and easy to find. (Facebook via AP)

‘We Are Basically Stuck With All This Garbage’

“Almost everything Facebook has designed has been designed for good people. People who are nice to each other, who have birthdays to celebrate, who have new puppies and generally like to treat others well,” said Siva Vaidhyanathan, director of the Center for Media and Citizenship at the University of Virginia. “Basically Facebook is made for a better species than ours. If it were made for golden retrievers, everything would be great.”

“Every couple of weeks, we hear about Facebook knocking down troublesome pages, making promises about hiring more people, building AI and so on. But at Facebook’s scale, none of that will matter.” — Siva Vaidhyanathan, director of the Center for Media and Citizenship at the University of Virginia

But if just 1% of the 2.4 billion people on Facebook want to do terrible things to others, that’s 24 million people.

“Every couple of weeks, we hear about Facebook knocking down troublesome pages, making promises about hiring more people, building AI and so on,” Vaidhyanathan said. “But at Facebook’s scale, none of that will matter. We are basically stuck with all this garbage.”

Chris Hughes, a co-founder of Facebook, called for a breakup of the social media giant in a Thursday op-ed. Vaidhyanathan also thinks strong government regulation could be the answer, such as laws that “limit companies’ ability to suck up all our data and use it to target advertising.”

“We really should be addressing the back end of Facebook,” he said. “That’s what you have to attack.”