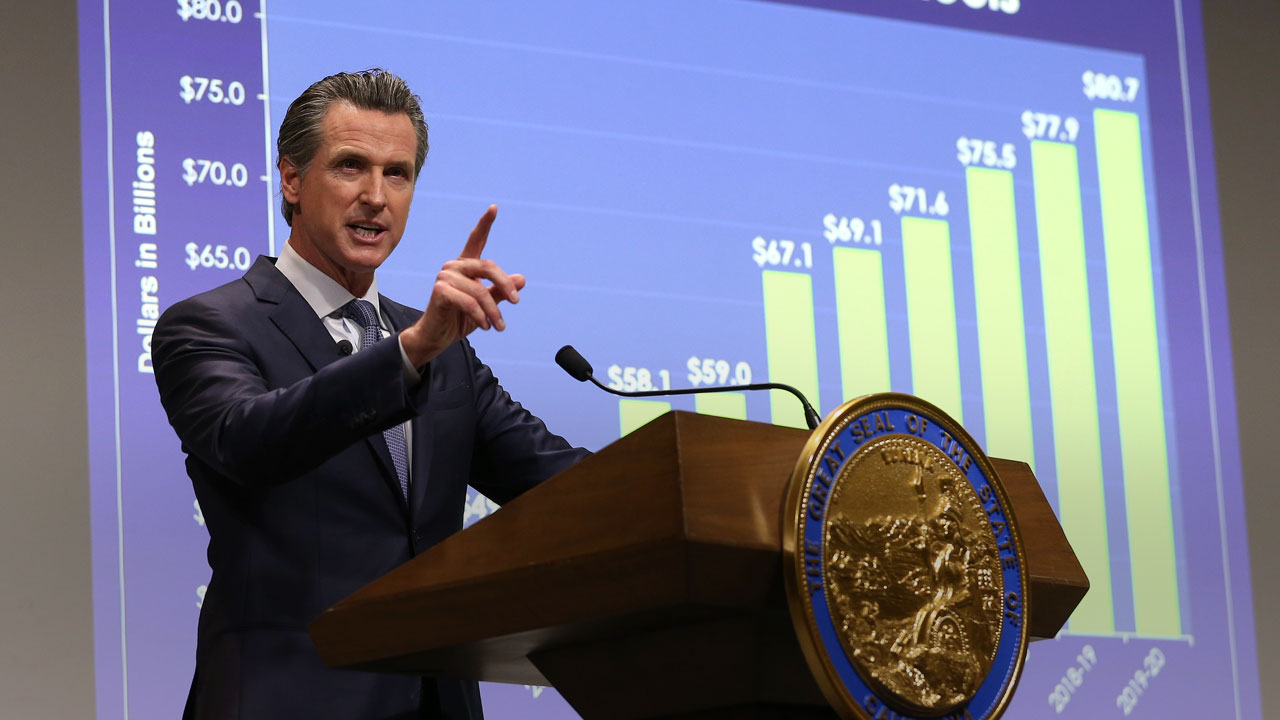 SACRAMENTO — California is flooded with money and Gov. Gavin Newsom will outline how he thinks the nation’s most populous state should spend it Thursday when he releases a revised version of his $200 billion-plus state budget.

“There may be a modest increase, but there’s a modest decrease in the out years. I don’t want to get ahead of myself on the announcement but that’s, broad strokes, a preview.” — Gov. Gavin Newsom

The Democratic governor has already proposed new spending to expand health care for young immigrants living in the country illegally, prevent and fight wildfires, spur more housing and boost early child care programs. He wants to add a new tax on drinking water while taking away taxes on tampons and diapers, and he’s pledged to pay down debts and save money for a future recession.

He’s aided in his plans by a $21.5 billion surplus he predicted in January, the largest state surplus in at least 20 years. That number may be even larger in his new proposal after the state collected several billion dollars more than it predicted in income tax revenue in April.

Newsom said earlier this week the surplus may grow slightly, but he also suggested the state’s fortunes would change in future years, a message that echoed the warnings of his predecessor, fellow Democrat Jerry Brown.

“There may be a modest increase, but there’s a modest decrease in the out years,” Newsom said. “I don’t want to get ahead of myself on the announcement but that’s, broad strokes, a preview.”

A larger surplus could mean even more money for Newsom and lawmakers to wrangle over ahead of a June 15 deadline to pass a budget or lose pay. Newsom has until June 30 to sign it, and it will cover the state fiscal year beginning July 1.

Newsom’s first spending plan included fresh spending for K-12 schools, colleges, housing, health care and welfare. He proposed $750 million for kindergarten programs, plus $500 million for early child care infrastructure and hundreds of millions more to target homelessness and build more housing. He sought to require all California residents to have health insurance while proposing Medicaid coverage for people living in the country illegally up to age 25.

But he also preached fiscal discipline by adding $13.6 billion to the state’s reserves and to pay down pension and other debt. Instead of tapping the surplus to fund improvements to drinking water and bolstering the state’s 911 system, he proposed tax increases that he said would create a long-term, sustainable pot of money.

It was partly homage to Brown, whose thrifty policies angered some in the Democratic-controlled legislature but laid the groundwork for the massive surplus Newsom enjoys. Last year Brown had ominously warned “darkness, uncertainty, decline and recession” were coming.

Newsom told The Associated Press that Brown’s philosophy is still “very present” in the governor’s office.

“I think his legacy is so attached to his budgeting,” he said. “What he did, I appreciated and admire and I have no interest in undoing.”

Whether lawmakers share that vision is the next question.

Newsom Vowed to Spend $15 Million on Grants for Security Enhancements

Newsom is already facing pressure from lawmakers and outside groups to unleash the historic surplus.

Democrat Assemblyman Reggie Jones-Sawyer has asked for $100 million for youth development and pre-arrest diversion programs for children under 18.

Democratic Sen. Anna Caballero, who represents many Central Valley communities without clean water, has a proposal to tap the surplus from water infrastructure improvements rather than enacting a new tax.

Gun control groups have asked for $39 million toward violence prevention, and some lawmakers have proposed expanding health care to all immigrants living in the state illegally rather than just those up to age 26.

Newsom, for his part, is poised to suggest more new spending of his own.

In April, following the deadly shooting at a San Diego-area synagogue, Newsom vowed to spend $15 million on grants for security enhancements at nonprofits vulnerable to hate crimes. On Tuesday, he unveiled a “parents’ agenda” complete with hundreds of millions in new spending on child care, paid family leave and tax credits for families with kids under 6.

He did not provide specific costs for every program but promised more information in the budget update.

TV Pitches for Prescription Drugs Will Have to Include Price