YOSEMITE NATIONAL PARK — Red-legged frogs made famous by Mark Twain are thriving in Yosemite Valley after a decades-long absence. 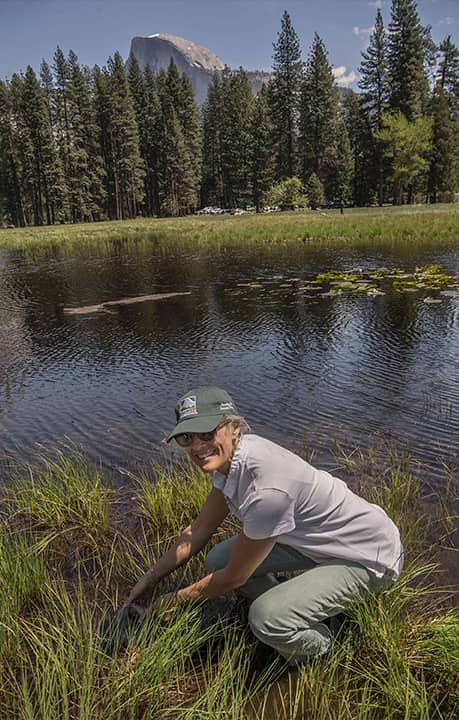 Ecologists this spring found clusters of eggs in meadows and ponds, proof of the first breeding by the frogs in Yosemite since 2017, when adult red-legged frogs were reintroduced after a 50-year absence, Yosemite National Park Superintendent Mike Reynolds said Monday.

“It’s unusual to find eggs in any location and to find them this soon is a strong indication that red-legged frogs are adapting successfully to the riparian areas where we reintroduced them,” Reynolds said.

The California red-legged frog is named for its colorful legs and belly. It was featured in Twain’s short story “The Celebrated Jumping Frog of Calaveras County.”

The frog disappeared from Yosemite in part because non-native, predatory bullfrogs first introduced to a reflection pond spread throughout the valley and, over time, gobbled them up.

The insatiable bullfrogs have been eradicated from the park, clearing the way for the red-legged frog’s return.

About 200 More Adult Frogs Were Released in Yosemite Valley

The amphibians were reintroduced in Yosemite National Park under a partnership with federal and state agencies, the Yosemite Conservancy and the San Francisco Zoo & Gardens, where thousands tadpoles and adult frogs are being bred for release in the park 200 miles away.

The program has reintroduced an estimated 4,000 California red-legged frog eggs and tadpoles and 500 adult frogs, setting them free in the park’s lush meadows, alpine lakes and winding Merced River.

Last week, about 200 more adult frogs were released in Yosemite Valley and another 275 will be released in June, including 75 that will be fitted with radio transmitters to better understand their behavior and habitats to determine the best locations for future reintroductions, officials said.

At 2 to 5 inches long, red-legged frogs are the largest native frogs in the West and once were found throughout California.

Efforts are underway to restore the species in other areas, including in a creek in the Santa Monica Mountains, which stretch from Los Angeles westward along the Malibu coast into Ventura County.