After more than two years of the Donald Trump presidency, Andrea Petrusky is ready for some fundamental changes in the way the United States government works.

“Right now we’re being shown all of the loopholes, the president being able to do all the things that no president should. It’s time to update what he’s allowed to do and not do. I think it’s time to toddler-proof the presidency.” — Andrea Petrusky, a 46-year-old elementary school teacher

“Right now we’re being shown all of the loopholes, the president being able to do all the things that no president should,” said Petrusky, a 46-year-old elementary school teacher in a Seattle suburb. “It’s time to update what he’s allowed to do and not do. I think it’s time to toddler-proof the presidency.”

Petrusky is not alone in yearning for big changes to the way the United States government is structured. A new survey by the University of Chicago Harris School for Public Policy and The Associated Press-NORC Center for Public Affairs Research shows that 54% of Americans think the system needs major changes and 12% believe it should be completely replaced.

While 61% of Democrats like Petrusky want big changes, 52% of Republicans do as well. About 1 in 10 Democrats and Republicans say they want the system completely replaced, while that view is about twice as common among independents.

The AP-NORC poll finds that discontent with the government system is closely tied with policy concerns. It asked Americans how they think the government is performing on a series of issues as well as whether it has a role in handling those issues at all. Those who are most critical of the way government handles issues they think it should be dealing with are most likely to want changes, with 65% saying they desire major changes and 18% seeking a completely different system of government.

By contrast, among those happiest with the government’s performance on those issues, 48% say they want major changes and 8% want a total overhaul.

Majority Believe Businesses, Wealthy Have Too Much Power

Petrusky, who’s trained as an environmental scientist, is aghast at how Trump named a former coal lobbyist, Andrew Wheeler, to run the Environmental Protection Agency.

“Maybe that should be an elected position, too, where you have to prove your worth,” she said.

Don Conford likes what Trump is doing, but he, too, thinks there needs to be big changes in the way the government works, like term limits for members of Congress. The 54-year-old runs his own small construction business from a Los Angeles suburb and thinks government is corrupt.

Conford is part of the 70% of Americans who feel that people like them have too little influence on the government. In contrast, 81% think wealthy people have too much sway and 78% think large businesses have too much power in Washington.

Lashaunte Halliburton is a 30-year-old unemployed mother of three in Dyersburg, Tennessee, who has held a series of low-wage jobs but couldn’t afford to maintain them and look after her children. She’s upset Trump has cut aid for low-income housing. 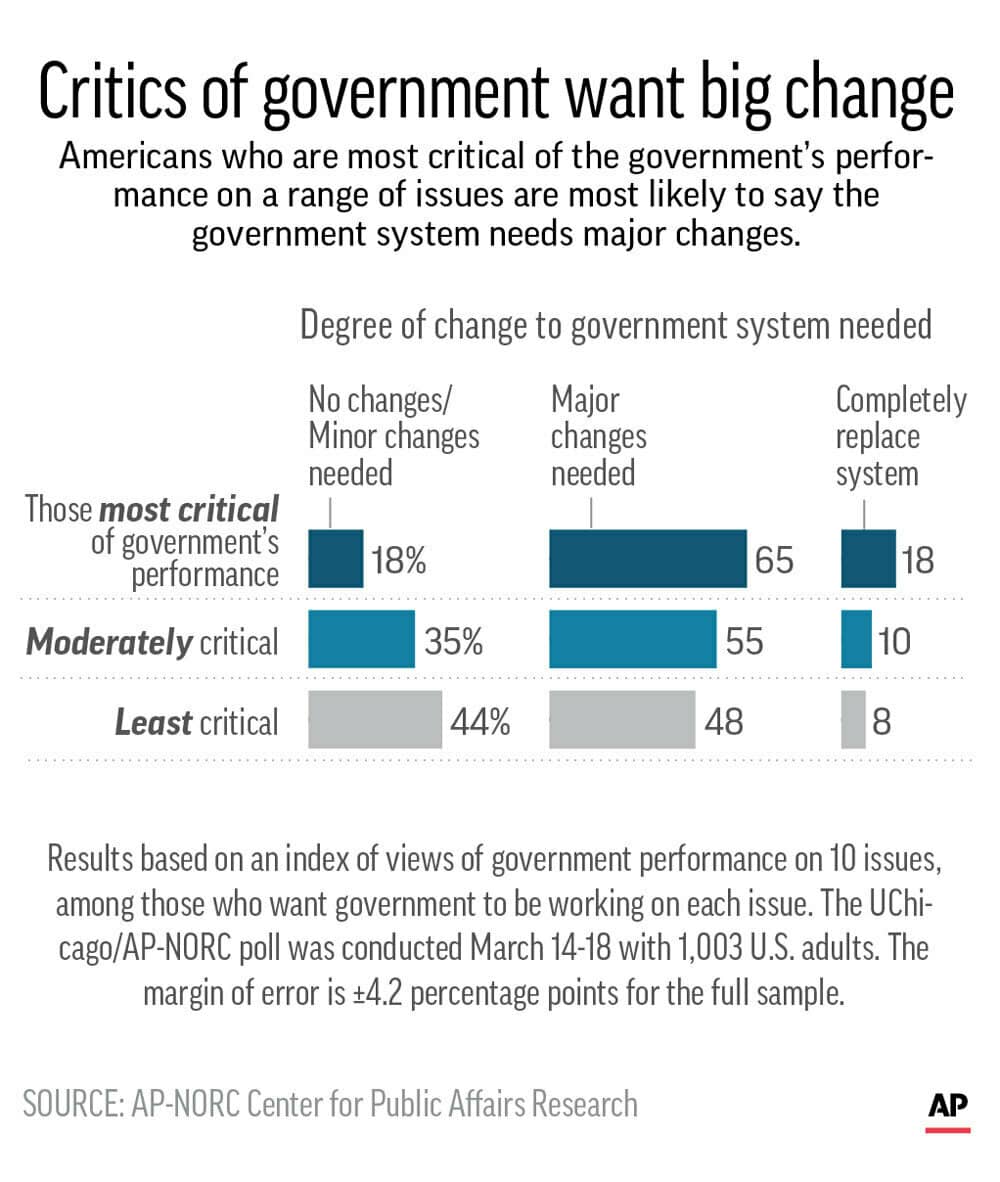 “Mitch McConnell has been up there forever, and he’s catering to the president and you cannot pass any laws or get anything done. You should have term limits, and ordinary people should be voted from our neighborhoods to go up there in Washington, D.C.” — Inez Parker, an 81-year-old retired office assistant

Parker thinks there should be term limits for senators, naming Senate Majority Leader Mitch McConnell, a Republican, as someone who needs to be barred from office.

“Mitch McConnell has been up there forever, and he’s catering to the president and you cannot pass any laws or get anything done,” said Parker, a Democrat. “You should have term limits, and ordinary people should be voted from our neighborhoods to go up there in Washington, D.C.”

Voters like Parker who are frustrated at how the Republican Party has been able to retain its power despite losing the popular vote in 2016 are part of the reason Democratic candidates for president have been pushing major structural changes, like abolishing the Electoral College and adding seats to the Supreme Court to deprive the GOP of the majority it held when it refused to appoint President Barack Obama’s final nominee to the top court. Parker thinks Trump’s two appointments to the court are illegitimate.

“They’re crooked,” she said of the justices, Neil Gorsuch and Brett Kavanaugh.

Not All See Need for Makeover

Not everyone thinks the system needs a makeover. William Walker, a 33-year-old high school baseball coach in Orlando, Florida, is a Democratic-leaning independent. He’s no fan of the president or his policies. But he also doesn’t see major structural changes as the answer.

“I think our democracy works pretty effectively,” Walker said. “It has some opportunities for mischief and craziness, but all do. I prefer ours.”

Still, the poll shows that close to 3 in 10 Americans say the government can’t work well no matter who is elected, with that view more common among Republicans (38 than Democrats (16%).

Tara Marsh sees government as inherently bloated and inefficient. And she’s unhappy with much in public life — the way people treat each other, the spread of pornography and of what she sees as excessive transgender rights.

But the 51-year-old office administrator and registered Republican in Bend, Oregon, doesn’t think there’s much government can do about it.

“The government,” she said, “can’t fix the human heart.”

The AP-NORC poll of 1,003 adults was conducted March 14 to 18 using a sample drawn from NORC’s probability-based AmeriSpeak Panel, which is designed to be representative of the U.S. population. The margin of sampling error for all respondents is plus or minus 4.2 percentage points.