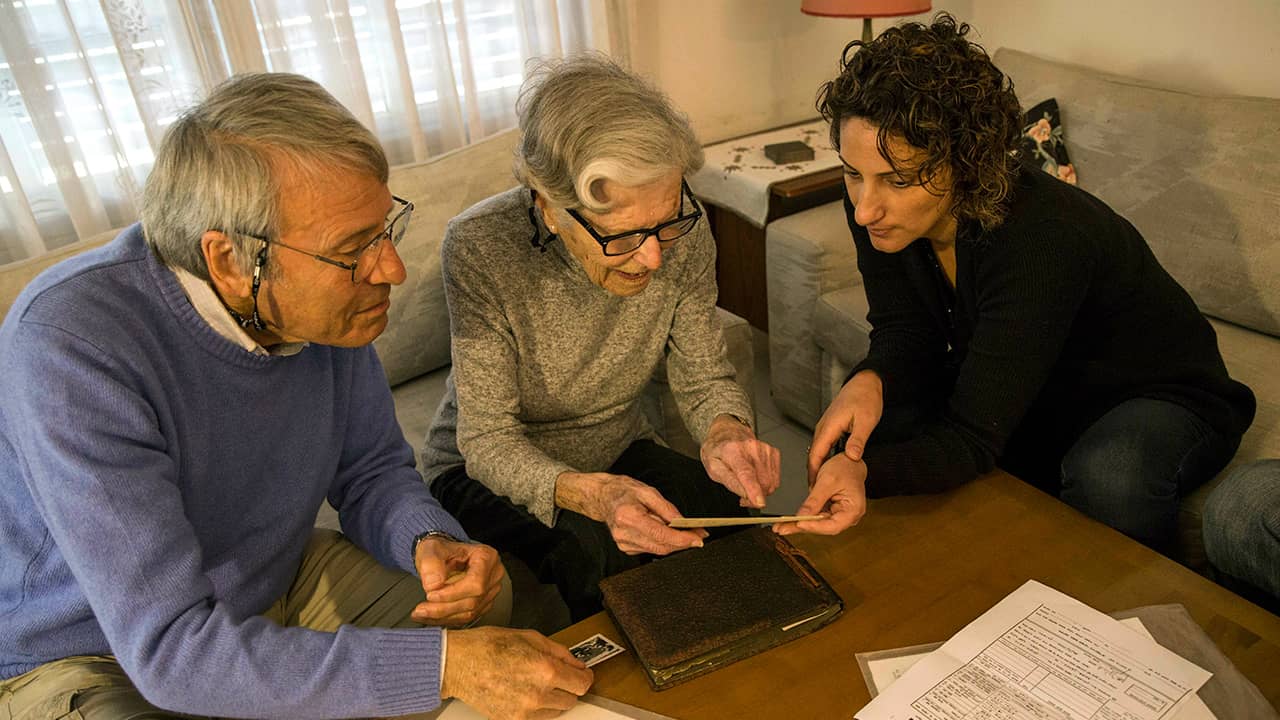 RAMAT GAN, Israel — Under a fluorescent light, an archivist from Israel’s Yad Vashem Holocaust memorial snaps photos and scans into her mobile database the last remnant that a pair of elderly siblings have of their long-lost father — a 1943 postcard Samuel Akerman tossed in desperation out of the deportation train hurtling him toward his demise in the Majdanek death camp.

“It’s what we have left from him,” said Rachel Zeiger, his now 91-year-old daughter. “But this is not for the family. It is for the next generations.”

With the world’s community of aging Holocaust survivors rapidly shrinking, and their live testimonies soon to be a thing of the past, efforts such as these have become the forefront of preparing for a world without them.

Through its “Gathering the Fragments” program, Yad Vashem has collected some 250,000 items from survivors and their families in recent years to be stored for posterity and displayed online in hopes of preserving the memory of the 6 million Jews killed by the Nazis, even after the last of the survivors has passed away.

Copious video testimonies have been filmed and even holograms have been produced to try to recreate the powerful impact of a survivor’s recollection, which has been the staple of Holocaust commemoration for decades. This year, an Instagram account was created based on the real-life journal of a teenage Jewish victim to make her story more accessible to a younger generation.

With the passing of time, any physical links to the Holocaust and its victims have become valuable means of remembrance and evidence against the growing tide of denial and minimization of the genocide around the world.

“The German Nazis were determined not only to annihilate the Jewish people, but also to obliterate their identity, memory, culture and heritage. By preserving these precious items … and revealing them to the public they will act as the voice of the victims and the survivors and serve as an everlasting memory.” — Yad Vashem Chairman Avner Shalev

As Israel starts marking its annual Holocaust Remembrance Day at sundown Wednesday, Yad Vashem will be laying the cornerstone of its new campus for the Shoah Heritage Collections Center — the future permanent home for its 210 million documents, 500,000 photographs, 131,000 survivor testimonies, 32,400 artifacts and 11,500 works of art related to the Holocaust. On Thursday, it will offer the public a rare behind-the-scenes look of its preservation work, with tours of its collection, archive and digitizing labs.

“The German Nazis were determined not only to annihilate the Jewish people, but also to obliterate their identity, memory, culture and heritage,” said Yad Vashem Chairman Avner Shalev. “By preserving these precious items … and revealing them to the public they will act as the voice of the victims and the survivors and serve as an everlasting memory.”

Samuel Akerman’s jarring letter to his family will soon join the collected assortment.

“My heart is bitter. I unfortunately have to inform you that I, together with 950 other people, am headed toward an unknown destination,” he scribbled in shaky handwriting to his two children on Feb. 27, 1943, from inside the packed transport. “I may not be able to write you again … pray to God that we will joyfully see each other again. Don’t give up hope and I am sure God will help us.”

Akerman, a diamond merchant who dreamed of moving to pre-state Israel, was never heard from again.

A bystander likely found the discarded postcard on the ground and mailed it to Zeiger and her younger brother, Moshe, in occupied France, where they had fled from their home in Belgium after the Nazis invaded. After the father was deported, the rest — mother, grandmother and the two children — survived by assuming false, Christian identities.

Zeiger recalls several close encounters when their cover was nearly lost. Once, the Gestapo arrived in the early morning hours to seize a Jewish family hiding in the ground floor of their building. When the Nazis knocked on their third-floor door, a teenage Zeiger presented their fake papers in her fluent French to convince them they had nothing to look for there.

“I’ve never felt that way in my life,” she recalled from her quaint house in Ramat Gan, just outside Tel Aviv. “I had to vomit after they left. My whole body clenched.”

After the war, they returned to Antwerp to find their home ravaged. They waited there several years, in the faint hope that their father would somehow return, before giving up and moving to Israel.

The postcard remained stashed away as a vestige of their painful past for more than 75 years, until Moshe Akerman heard of the Yad Vashem campaign seeking personal effects of aging survivors.

Nazis and Their Collaborators Confiscated Their Possessions

“My kids are glad I did it so that this testimony will exist, because otherwise you don’t talk about it,” said Akerman, 84. “It’s a small testimony to what happened, another drop in this sea of testimony. It doesn’t uncover anything new. The facts are known. What happened happened, and this is another small proof of it.”

“My kids are glad I did it so that this testimony will exist, because otherwise you don’t talk about it. It’s a small testimony to what happened, another drop in this sea of testimony. It doesn’t uncover anything new. The facts are known. What happened happened, and this is another small proof of it.” — Moshe Akerman

Besides rounding up Jews and shipping them to death camps, the Nazis and their collaborators confiscated their possessions and stole their valuables, leaving little behind. Those who survived often had just a small item or two they managed to keep. Many have clung to the sentimental objects ever since.

But with the next generation often showing little interest in maintaining the items, and their means of properly preserving them limited, Yad Vashem launched “Gathering the Fragments” in 2011 to collect as many artifacts as possible before the survivors — and their stories — were gone forever. Rather than exhibit them in its flagship museum, Yad Vashem stores most of the items in a specialized facility and uploads replicas online for a far wider global reach.

“These items complement other material we have and help us complete the puzzle of the victims’ stories,” explained Orit Noiman, head of Yad Vashem’s collection and registration center. “The personal item becomes part of the collective national memory. With the clock ticking and the survivors leaving us, this is what we can make accessible to the public.”

WikiLeaks’ Assange Gets 50 Weeks in Prison for Jumping Bail