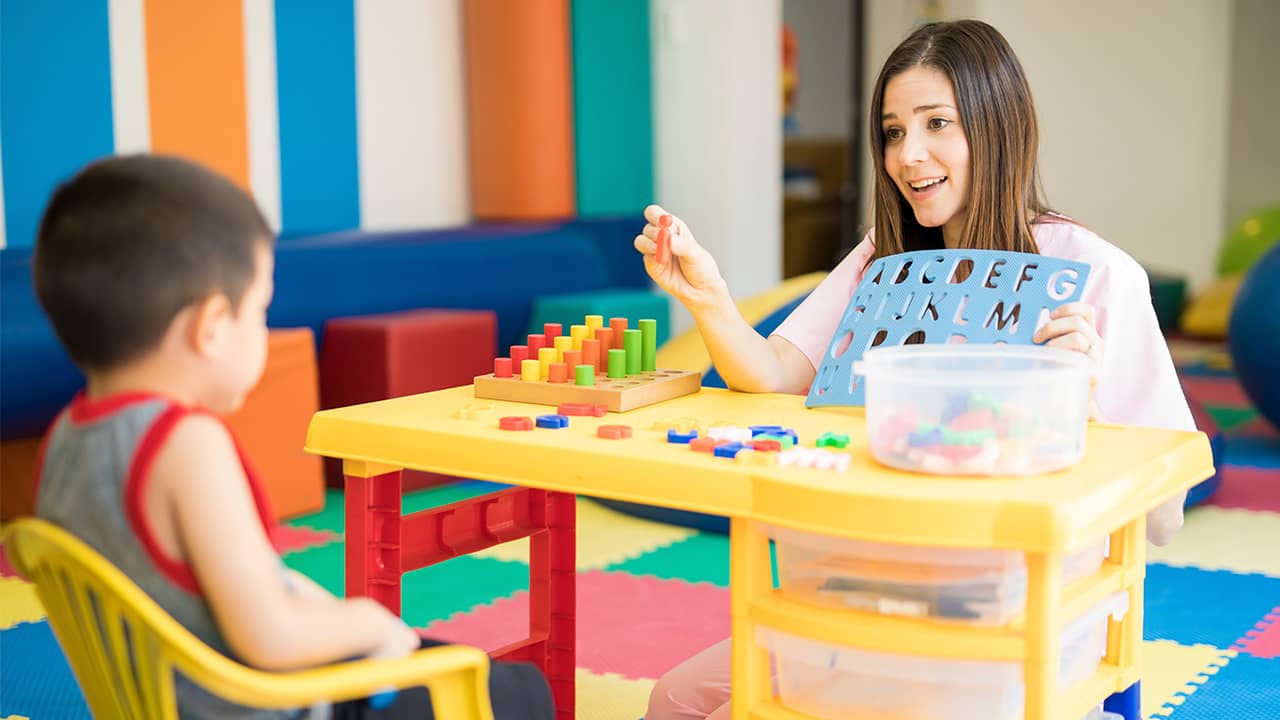 As soon as he became superintendent in 2017, Bob Nelson publicly acknowledged serious, heart-breaking problems in Fresno Unified’s often-criticized special education program.
The criticism hasn’t relented even as Nelson has become the social media face of the district’s move to “inclusion” — that is, teaching special ed students, whenever possible, in general ed settings.

The question burning Nelson’s ears: When will you give special ed the financial support and clear-eyed attention it deserves?

The superintendent will provide a big, bold answer at Wednesday night’s board meeting.
The proposed 2019-20 special education budget includes $10.2 million in ongoing new funding and $1.4 million in one-time funds for portable classrooms. That doubles last year’s $5 million increase in new ongoing funding.
Bottom line: The special ed budget this school year totaled $138.3 million. Next year, it climbs to $149.5 million.
Moreover, this new money comes with a reworking of special ed management. The target is providing direct oversight of programs by managers with expertise in specific areas of special ed, such as working with deaf, visually impaired or orthopedically impaired students. District critics accurately point out the special ed program is top-heavy in administrators with autism backgrounds.
Nelson said the district will hire two additional program managers as part of the restructuring.
“We’re excited about what we’ve put together,” Nelson said. “Some people were asking, ‘Why are you delaying the special ed budget?’ We’ve been working hard on it and collaborating with (the Fresno Teachers Association), and board members. We wanted to be able to thread the needle.
“This proposal is not coming as a surprise to our bargaining unit or the board.”


“We’re excited about what we’ve put together. Some people were asking, ‘Why are you delaying the special ed budget?’ We’ve been working hard on it and collaborating with (the Fresno Teachers Association), and board members. We wanted to be able to thread the needle.” — Superintendent Bob Nelson

So, what will the extra $10 million buy?
Forty-four teachers to lower student ratios and grade spans of students in a classroom.
Forty-five paraprofessional aides and assistants to better support students and teachers.
A total of 10 speech-language pathologists, occupational therapists, teachers for assistive technology, and teachers for the orthopedically impaired.
One special-ed counselor and four instructional coaches.
The teachers, paraprofessionals, and instructional coaches will be phased in over three years. 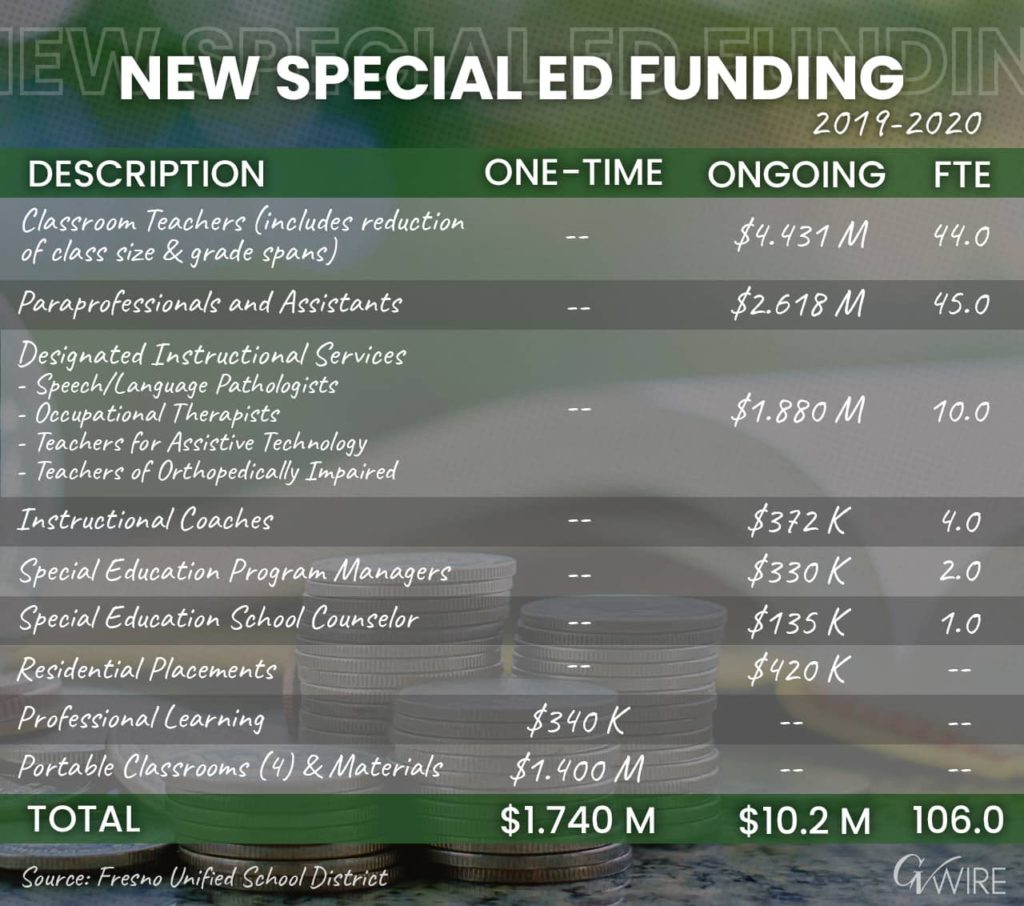 Can the District Fill the New Positions?

Fresno Unified has struggled to fill special ed vacancies. Right now, it is short 24 speech-language therapists and is providing services for many students using video chat sessions. It also has many unfilled aide positions. The aide situation especially frustrates teachers, who either don’t have the help they need or must make do with untrained aides “hired off the street.”
One suggestion is that the district add hours to the aide schedules, in effect, making more of those positions full time — as was done to solve the district’s bus driver shortage. Nelson backs the idea.
“The last thing you want in a special needs environment is turnover,” Nelson says. ‘You want to support the student and teacher as well as you can.”
The speech-language therapist challenge, Nelson says, is the result of “salaries that are behind the times.”
Says Nelson: “We need to make sure that we are competitive with our hard-to-fill positions and we find new ways to market them.”
In 2014, the California Department of Education cited the district for failing to provide speech therapy for 509 special needs students and said it was breaking the law.
While video-chat lessons are helpful, students will make bigger gains — and retain those gains — with therapists. Bringing more of them on board must be a district priority.

The Most Important Job of All

The district has been without a special education director since Adrian Varanini stepped down at the end of January. Initially, the district wanted to make a quick hire. But it came to its senses and decided to conduct a national search. It also has elevated the position and increased the pay range to $111,258 to $135,234.
The position is challenging and well-qualified candidates typically would attract higher salaries elsewhere. Nelson says he is enlisting the help of the Council of the Great City Schools and former Sanger Unified Superintendent Matt Navo, a noted special ed expert, in the search.
“The stakes are high, no doubt,” Nelson says. “Our director has to come with extensive special ed training.”

You can tell a lot about an organization by examining its budget. The black type on the page speaks volumes about values and priorities. In political terms, the budget is where the rubber hits the road.


A draft copy of proposed changes to the Community Advisory Committee bylaws shows now-monthly meetings sliced to four a year, and the quorum for voting cut from 60% to 40% of committee members. The district should be growing this committee not sentencing it to irrelevance.
In this case, district leaders are increasing the commitment to special ed students and their families. That’s significant, especially when you consider that local school districts in California bear about 64% of the costs for special ed, with the state (27%) and the federal government (9%) providing the remainder.
But real improvement also requires assembling an expert management team, properly supporting those on the front lines of this very difficult work, and communicating effectively with special ed families.

You might remember that the Council of the Great City Schools’ top-to-bottom evaluation of special ed attributed many shortcomings to serious organizational flaws and cumbersome hiring procedures. Vacancies made Fresno Unified’s workload levels so high that effective student support and instruction were difficult, the report stated.
In addition, managers have clearly failed to execute Nelson’s order last year to better engage special ed families. A draft copy of proposed changes to the Community Advisory Committee bylaws shows now-monthly meetings sliced to four a year, and the quorum for voting cut from 60% to 40% of committee members. The district should be growing this committee not sentencing it to irrelevance.
Clearly, with board approval, solid funding will be in place. The challenge is ensuring this new investment produces a special education program that everyone in Fresno Unified — including taxpayers — is proud of.