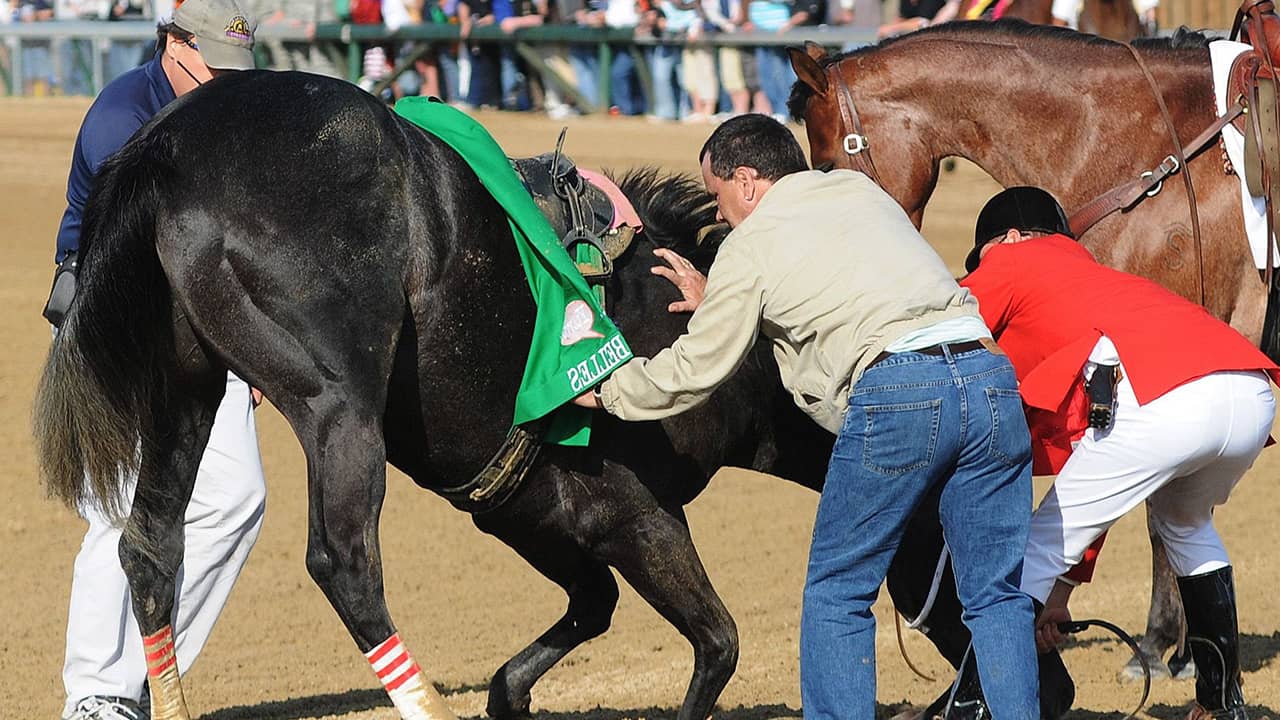 The Situation at Santa Anita Was Something of a Perfect Storm

Much like the 21 horse deaths at Aqueduct in New York in 2011-12 that led to the task force, many believe the situation at Santa Anita was something of a perfect storm: a combination of a rainy winter after years of drought that affected the surfaces, pressure from ownership on horsemen to fill fields and possibly problems with medications used on horses. After the fatalities began Dec. 26, Santa Anita closed for almost all of March and has seemed to get the problem under control since reopening , though it already has hurt racing there.
“They’re seeing an exodus of horses, they’re seeing an exodus of horsemen, they’re now being forced to reduce racing days, they’re running short fields and they’re in deep trouble,” Foreman said.
Horse racing officials from the Mid-Atlantic region, which consists of tracks in New York, New Jersey, Pennsylvania, Delaware, Maryland and Illinois, feel the findings of the 2012 task force provided a roadmap for Santa Anita. Since the recommendations from that task force were put into place, breakdowns in the Mid-Atlantic region have been reduced by 35%.
Foreman said last year the Mid-Atlantic was at the national average of 1.68 fatalities per 1,000 starts, which he called “unacceptable.” He and Gaudet believe the magnitude of the fallout at Santa Anita could have been avoided.
“This thing with Santa Anita, it is chaos because they’ve not done the proper investigation, the protocols,” said Gaudet, who has been with the Maryland Thoroughbred Horsemen’s Association since its inception. “Most of the things that they want to do in California we’ve already done here. We’ve been doing it. It’s nothing new. It should’ve been done a long time ago.”
Neither the Stronach Group that owns Santa Anita Park, nor the California Horse Racing Board that sets regulations immediately responded to a request for comment.
One issue that continues to be debated is the use of Lasix — a diuretic given to horses on race days to prevent pulmonary bleeding. The Triple Crown races are planning to phase out the use of Lasix over the next few years, even though independent regulators have found it is unrelated to horse deaths.

Some Trainers Were Medicating Horses With Anti-Inflammatories

After New York Governor Andrew Cuomo called for an investigation amid the breakdowns at Aqueduct, the task force cited issues other than Lasix as causes for fatalities, including oversight and use of medicine, track safety and purse structure.

“That commoditized the horse and established sort of a day-trading environment where you went all-in for that one big return and it didn’t matter after that because it wasn’t going to be your asset for very long,” Scollay said. “It sets horses up to be at substantially increased risk.”
Sometimes the track itself is a risk, which was believed to be a cause of 19 horse fatalities at Saratoga Race Course in 2017 and played a role at Santa Anita.
In an effort to address the track issue, the National Thoroughbred Racing Association contributed a $100,000 grant for the Racing Surfaces Testing Laboratory run by Dr. Mick Peterson at the University of Kentucky. The lab is developing technology such as sensors that can read moisture content of a track in real time and attempt to make the surface as consistent as possible.
While the lab testing and other initiatives are in the works, Foreman doesn’t believe the industry is doing a good job of informing the public of what it’s doing to try to prevent deaths. He also is discouraged that various jurisdictions have chosen to adopt different rules to combat the issue.
The proposed solutions in California and even at Churchill Downs, home of the Kentucky Derby, are very different from the policies that have been effective in the mid-Atlantic.
“What’s distressing to me is that here’s an opportunity for some consensus-based best practices and everybody’s going on their own, trying to do better than what the other guy did,” Foreman said. “That helps to create an atmosphere of industry dysfunction.”