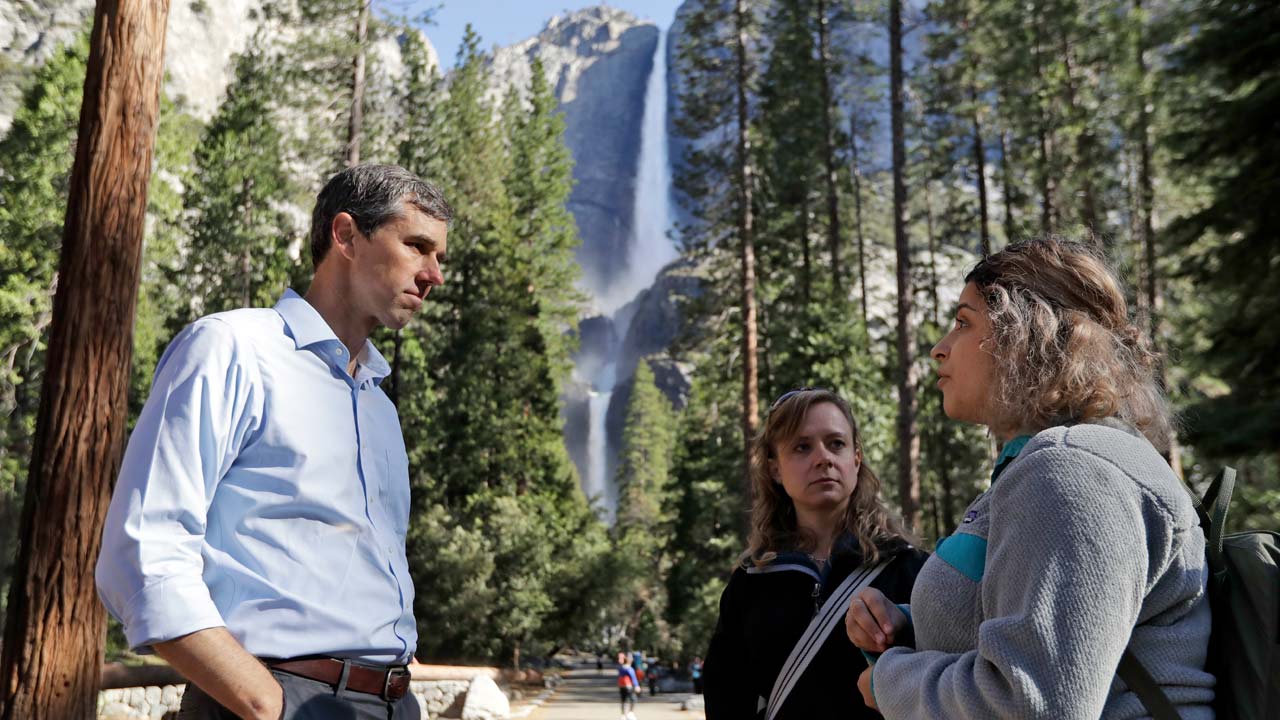 EL PORTAL — Democratic presidential candidate Beto O’Rourke has announced his first major policy initiative, a $5 trillion plan to combat climate change that he says will keep the Earth from sliding past the point of no return in less than a generation.

O’Rourke’s Plan Will Find a Receptive Audience in California

And, aligning with the Green New Deal, an ambitious but longshot initiative backed by some of the most liberal Democrats in Congress, O’Rourke’s proposal calls on the U.S. to guarantee net-zero carbon emissions by 2050, while promising to reach half that goal in just the next 11 years.
“This is the most ambitious climate plan in the history of the United States,” O’Rourke said on a video from Yosemite that he posted on Twitter. He has for weeks warned that the U.S. and the world only have a few years to act before damage to the climate becomes nearly irreversible, and he called the issue his top priority.
O’Rourke’s plan will find a receptive audience in California. The state has set a goal of generating 100 percent of its electricity from noncarbon sources by 2045 and achieving “carbon neutrality,” meaning it takes as much carbon dioxide out of the air as it emits.


Related Story: Time for Yosemite and Humanity to Take a Break?

The announcement comes amid O’Rourke’s first visit as a presidential candidate to California, a state that’s experiencing more destructive and deadlier wildfires due in part to climate change. A blaze last summer caused a partial shutdown of Yosemite, and O’Rourke on Sunday met privately with firefighters in Mariposa County who battled it for weeks.
Shunning the lucrative fundraisers that commonly bring presidential contenders to California, O’Rourke drove hours from San Francisco, where he held a town hall on Sunday, to Mariposa, home to fewer than 20,000 people and, in the 2016 presidential primary, only about 6,000 voters.
He was similarly encountering few voters on his early morning walking tour of Yosemite, designed to learn about the effects of climate change on the park, 1,200 square miles (3,100 square kilometers) known globally for breathtaking waterfalls and giant sequoia trees. He then planned to drive to the Central Valley to meet with college students, a staple of his campaign.

With Nearly 40 Million People to Reach, Breaking Through Is Tough

The trip is consistent with the do-it-yourself campaign style that gave O’Rourke an unorthodox credibility with supporters in Texas and beyond. Californians contributed more than $5.5 million to his unsuccessful Senate bid last fall, second only to Texans in giving to the campaign.