Sheltering in Place During a Wildfire a Dicey Strategy 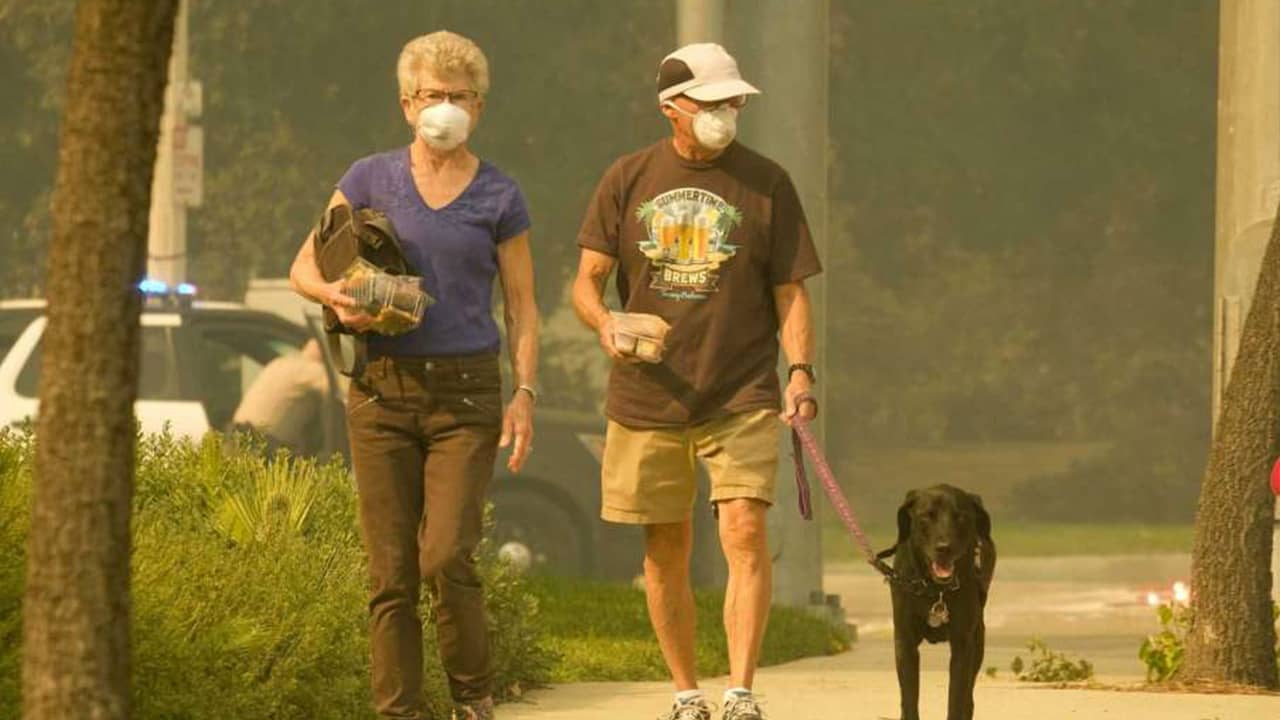 REDDING — For Californians who might have to escape wildfire again this year, the options are perilous. Many live in communities that don’t have well-thought-out public evacuation plans and lack the road capacity that’s needed to get everyone out fast.
Does this mean people should just shelter in place?
Absolutely not, except as a last-ditch resort, according to wildfire experts.

‘What Works in Once Case Does Not Work in Others’

The increasing frequency of wildfires means “we’ll need more shelter because there’ll be more intense fires burning closer to communities and offering less time” to evacuate, said Tom Cova, a professor of geography at the University of Utah who has studied wildfire’s impact on public safety. Equipping homes with the latest fire-resistant features including upgraded roofs, windows and landscaping is a necessary part of the equation, he said.
When evacuation is deemed too dangerous, that, “shelter will become more important, as a backup plan,” Cova said. “Or maybe, if you don’t have your mobility, shelter is your first choice.”
“Almost every outcome has happened, which is why we can’t ever come up with the ultimate protective action. We can’t say, ‘just do this,’ because the scenarios vary so much that what works in one case doesn’t work in others.”
In recent years, there have been several instances where, fire officials said, advance planning and quick decision-making led to shelter-in-place efforts gone right:


— With thousands of patrons inside, just one road out and the 2003 Cedar Fire advancing fast in the middle of the night, San Diego County fire officials knew it wasn't possible to evacuate the Barona Resort and Casino in time. Instead, they put the expansive complex surrounded by protective parking lots on lockdown, using the casino's loudspeakers to tell patrons to stay put. Outside, fire trucks sprayed water on hundreds of cars to keep them from igniting. "It wasn't the preferred thing to do. It was kind of what they were forced to do in those challenging circumstances," said John Todd, deputy chief of the Los Angeles Fire Department. "A lot of people died in that fire. And probably if they had evacuated the Barona Casino, that toll would have gone up."
— Howling winds during the 2008 Tea Fire pushed that blaze to the campus of Westmont College near Santa Barbara, destroying several residence halls and classrooms. More than 200 students, faculty and staff were evacuated to the Murchison Gymnasium, where they stayed the night. Although the gym was smoky and hot, the building didn't burn and there were no fatalities.
— Hundreds of students sought temporary refuge at Pepperdine University in Malibu last November, even as much of the community surrounding the campus went up in flames during the Woolsey fire. University leaders had encouraged, but not required students to stay in the Payson Library and Tyler Campus Center rather than join roads full of others trying to escape. The 830-acre campus's low-slung buildings are surrounded by "hundreds of yards of grass" which served as a natural buffer from the wildfire," said Todd. The school's practice of having students shelter in fire-resistant structures on campus is backed by the Los Angeles County Fire Department, but the decision still raised controversy, as The Desert Sun reported at the time.

During the Camp Fire in Paradise, hundreds of desperate residents sought shelter in precarious and unlikely spots.
Some people fled to Paradise Alliance Church, one of two city-designated gathering points.
A fire truck protected the sanctuary as the wind-driven blaze whipped and raged just beyond the building’s doors. The church, along with the residents who sought refuge there, survived.
The other designated disaster gathering spot was a large parking lot between the 765-seat Paradise Performing Arts Center and the Paradise Senior Center on Nunneley Road.
The concert venue still stands. The senior center was destroyed, although no deaths were reported there.

During the height of the Camp Fire disaster, with the main road to safety jammed, fire officials also directed dozens of motorists to a grocery store’s large asphalt parking lot. It wasn’t designated in advance, but the ad hoc solution worked.
After several harrowing hours amid the smoke, heat and ashes, the wildfire passed, leaving everyone in the parking lot alive. FILE – In this Aug. 2, 2016, file photo, helicopters fight the Soberanes Fire west of Cachagua, Calif. When a fire burned across Big Sur two years ago and threatened hundreds of homes scattered on the scenic hills, firefighters responded with overwhelming force, attacking flames from the air and ground. The so-called Soberanes Fire burned its way into the record books as the most expensive wildland firefight in U.S. history in what a new report calls “an extreme example of excessive, unaccountable, budget-busting suppression spending that is causing a fiscal crisis in the U.S. Forest Service.” (Vern Fisher/The Monterey County Herald via AP, File)

Still, the bias for early evacuation prevails nearly everywhere. That makes a proposal in Squaw Valley, a dramatic setting in the mountains on the northwest perimeter of Lake Tahoe, somewhat unique.
Like many others, resident Peter Schweitzer worries that should a wildfire ever reach the community where he’s lived for 10 years, motorists evacuating on the area’s main exit – the winding and narrow Squaw Valley Road – could run into dangerous delays.

In Santa Barbara County, Deputy Fire Marshal Rob Hazard has spent time thinking about where people could go if they couldn’t get out.
“In the real world,” Hazard said, members of the public may have waited too long to evacuate, must retreat due to wildfire, or can’t evacuate because their exit road is blocked.
His department is now devising alternatives for people whose evacuation routes are dicey because they live in remote locations along winding mountain roads.
Hazard said the department has scouted out large, undeveloped meadows on private land that could serve as a temporary refuge from high-intensity wildfires that often pass through quickly. “We could put 50 people in here in their cars and they could probably ride it out,” he said.
Related Topics:Californiansevacuation plansperilousroad capacityshelterwildfirewildfire experts
Up Next