West-Side Water Ticks Up to 65% of Allocation. Is It Too Little, Too Late? 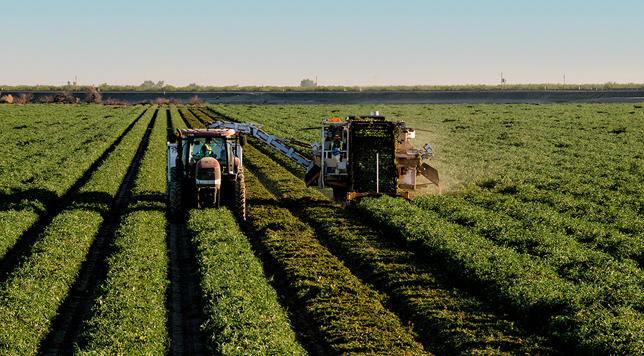 The heavy rains and snow falling on California this year are enabling the Bureau of Reclamation to boost water deliveries to growers on the west side of Fresno County.


“This announcement begs the question, what has to happen before south-of-Delta farmers served by the Central Valley Project can get a full supply?” — Thomas Birmingham, general manager, Westlands Water District

The Bureau of Reclamation announced Wednesday that it will supply South-of-Delta growers with 65% of their contracted water total.
“This has been a great year for California’s water supply,” said Mid-Pacific Regional Director Ernest Conant. “The increased precipitation has allowed us to increase the amount of water we allocate to our South-of-Delta contractors.”
The allocation amount, however, left Westlands Water District General Manager Thomas Birmingham wondering how deep the Sierra snowpack would have to be for west-growers to receive a full allocation.
“This announcement begs the question, what has to happen before south-of-Delta farmers served by the Central Valley Project can get a full supply?” Birmingham said.
“Notwithstanding the restrictions imposed by the biological opinions, Westlands firmly believes that there is sufficient water to allocate to south-of-Delta agricultural water services contractors 100%. Today’s announcement by Reclamation is disappointing for every south-of Delta farmer served by the CVP, and we hope Reclamation will increase the allocation quickly to enable farmers to quit pumping groundwater.”

Costa: Allocation Could Hit 100%, But It Will Be Too Late

Rep. Jim Costa (D-Fresno), who is a grower and one of the top water policy experts in Congress, said that he expected the initial west-side allocation in February to be 50%, followed by a 75% revise.
“I am frustrated, to say the least,” he said. “We’ve done some (water) modeling on our own, which showed, at a minimum a 75% allocation (by now). They still may get to 100% by June, but that won’t be in time for this crop year. ”

Mark Borba, president of Riverdale-based Borba Farms, said that the Bureau’s late allocations hurt farmers and create more aquifer overdraft.
“We are told repeatedly farmers should cease groundwater pumping when surface water is plentiful,” Borba said. “The concept of conjunctive use demands nothing less, and nothing better protects groundwater supplies than in-lieu banking.  And there are few circumstances when surface water is more plentiful than it is right now.
“We started our wells again this week … unnecessarily over-drafting the groundwater.  Once it’s pumped, you can’t undo it. Some bureaucrats believe that receiving a larger allocation later solves the problem. By then, it’s too late. You can’t unring a bell!”

The allocation for the Central Valley Project’s Friant Division remains unchanged for Class 1 contractors at 100%.
However, the period for uncontrolled season deliveries to Class 2 contractors has been extended to April 30. The first 800,000 acre-feet of available water supply are categorized as Class 1. Class 2 is considered the next amount of available water supply up to 1.4 million acre-feet.
All other CVP contractors’ allocations were previously increased to 100% of their contract totals in recent months.


“Even in above average water years, threatened and endangered species’ requirements, storage limitations and lost conveyance capacity from land subsidence pose challenges on Reclamation’s ability to export water South-of-Delta.” — Bureau of Reclamation
The Bureau has steadily increased irrigation deliveries for west-side growers. It announced a 35% allocation in February followed by 55% in March.


Related Story: Did Reclamation Do Right by Westlands With 55% Allocation?

In its Wednesday news release, the agency said that it “has had ongoing challenges in providing higher allocations for South-of-Delta water service contractors in recent decades. Even in above average water years, threatened and endangered species’ requirements, storage limitations and lost conveyance capacity from land subsidence pose challenges on Reclamation’s ability to export water South-of-Delta.”

But the Bureau pointed to potentially better days ahead for west-side agriculture and the environment, specifically citing President Trump’s 2018 memorandum intended to increase water availability in the western United States.
President Trump’s order calls for developing new biological opinions for the long-term coordinated operations of the CVP and the State Water Project.
Costa said the biological opinions are supposed to be completed by the end of 2019.
“Unfortunately, that doesn’t help us for this water year.”

Harris, Booker Miss Most Votes of Senators Running in 2020