“This will move things along at a record clip. And you’ll have a lot of water. I hope you’ll enjoy the water you’ll have.” — President Donald Trump
The move also would designate one official for each project to complete environmental reviews. The point person would then identify burdensome regulations to “suspend, revise or rescind.”
House Majority Leader Kevin McCarthy of Bakersfield said that the White House action could bring more than 1 million acre-feet of water to the Central Valley. He cast the signing as another promise made — and kept — by Trump.
In addition to the memorandum, the bipartisan America’s Water Infrastructure Act of 2018 awaits Trump’s signature. The act authorizes more than $6 billion in spending over 10 years for projects nationwide, including the Central Valley. 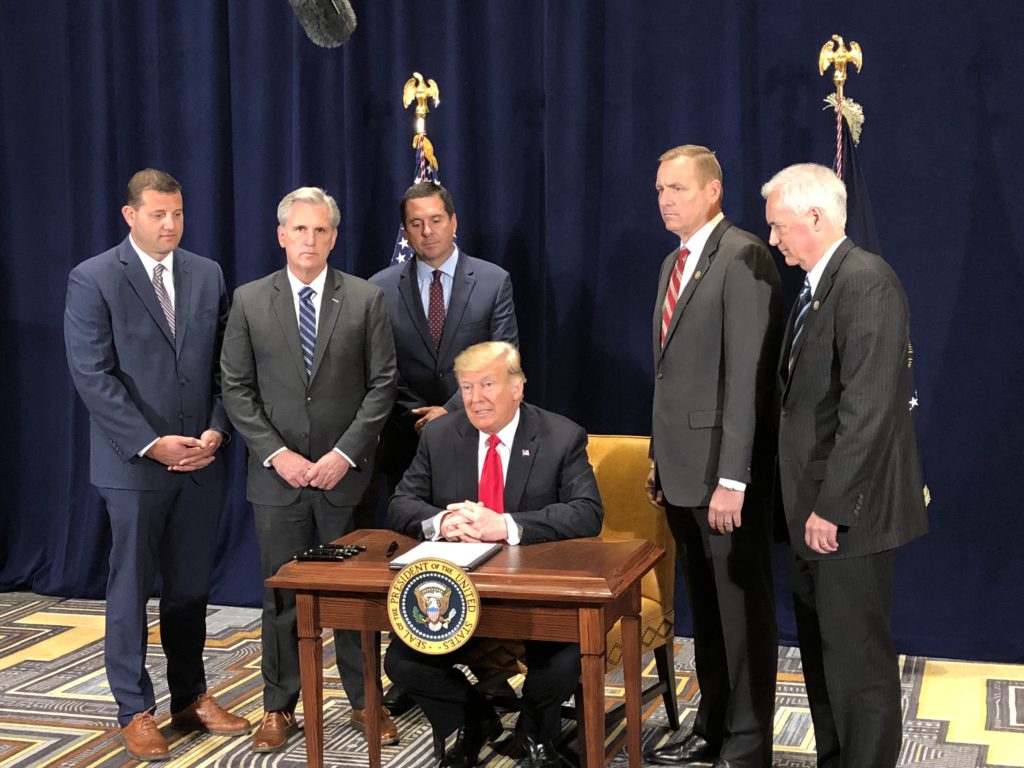 Five Republican congressmen from the Valley, several of whom are in competitive election fights, attended the signing.
McCarthy, Jeff Denham (Turlock), Tom McClintock (Elk Grove), Devin Nunes (Tulare) and David Valadao (Hanford) flanked Trump.
“This will move things along at a record clip. And you’ll have a lot of water. I hope you’ll enjoy the water you’ll have,” Trump told them.
The president called California farmland “as good as it gets,” and said the memo would be “great for the farmers and great for the economy.”

The five Valley Republicans joined with two other Californian Republicans — Reps. Tom Calvert (Corona) and Doug LaMalfa (Oroville) — to issue a joint statement.
The statement said in part:
“The President’s announcement is an immense relief for the farmers and families of the San Joaquin Valley and communities across California.
“Now, with this executive action, there is a strict timetable for rewriting the biological opinions that lie at the root of the water crisis. This executive action also prioritizes building critical projects to expand water storage in our state so that we can store more water during wet years for use in dry years.”
Said Valadao: “After years of fighting obstruction from California senators, this executive action is a giant leap toward reducing regulatory burdens and improving water deliveries to California’s Central Valley.
“I am proud our efforts have effectuated such substantial progress. With a reliable water supply, we can restore fallowed fields into fertile farmland, put Californians back to work, and give all Central Valley families the opportunity they deserve.”

What the Memorandum Does

The office of Rep. Jim Costa (D-Fresno) praised the president’s action in a written statement. 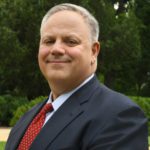 “Today’s action might be the most significant action taken by a president on Western water issues in my lifetime.”—David Bernhardt, deputy Interior secretary
“Today’s announcement by the President is the next step in restoring more reliable water supplies to all regions of California,” Costa said. “For years, communities throughout the San Joaquin Valley have been harmed by the regulations imposed under the Endangered Species Act which reduce the Valley’s water supplies in order to restore fish populations.
“I’d like to commend President Trump for issuing this Presidential Memorandum to identify a single person to be responsible for reducing harmful regulations that limit water supplies to the Valley, restore scientific integrity to the regulatory process, and expedite much-needed water storage in California and across the West.”
Nunes’ campaign opponent, Democrat Andrew Janz, praised the president as well.
“I’m excited to see the President taking our water issues here in the Valley seriously. I support today’s executive order and believe this is a topic I could work well with him on if elected to Congress,” Janz emailed in a statement.

For some environmental groups, they feel Trump’s move is more political than environmental.
“This is like many other moves the White House has made to attack the environment and California. It’s for show. It won’t deliver new water. It won’t make snowpack appear. It won’t stop the climate change effects that are putting greater and greater strain on the water system in California,” Sierra Club California director Kathryn Phillips said.
“It will distract from the solutions to key questions that Californians are facing and are trying to solve together: How do we make sure we have enough water for human consumption, to keep growing crops, and to continue protecting fisheries in this new era of climate disruption?”
The Natural Resources Defense Council declined GV Wire’s request for comment.
[tnc-pdf-viewer-iframe file=”http://www.gvwire.com/wp-content/uploads/2018/10/Water-memo.pdf” width=”800″ height=”700″ download=”true” print=”true” fullscreen=”true” share=”true” zoom=”true” open=”true” pagenav=”true” logo=”true” find=”true” current_view=”true” rotate=”true” handtool=”true” doc_prop=”true” toggle_menu=”true” language=”en-US” page=”” default_zoom=”auto” pagemode=””]

Who's #1? Nunes-Janz Most Expensive House Race in Nation.