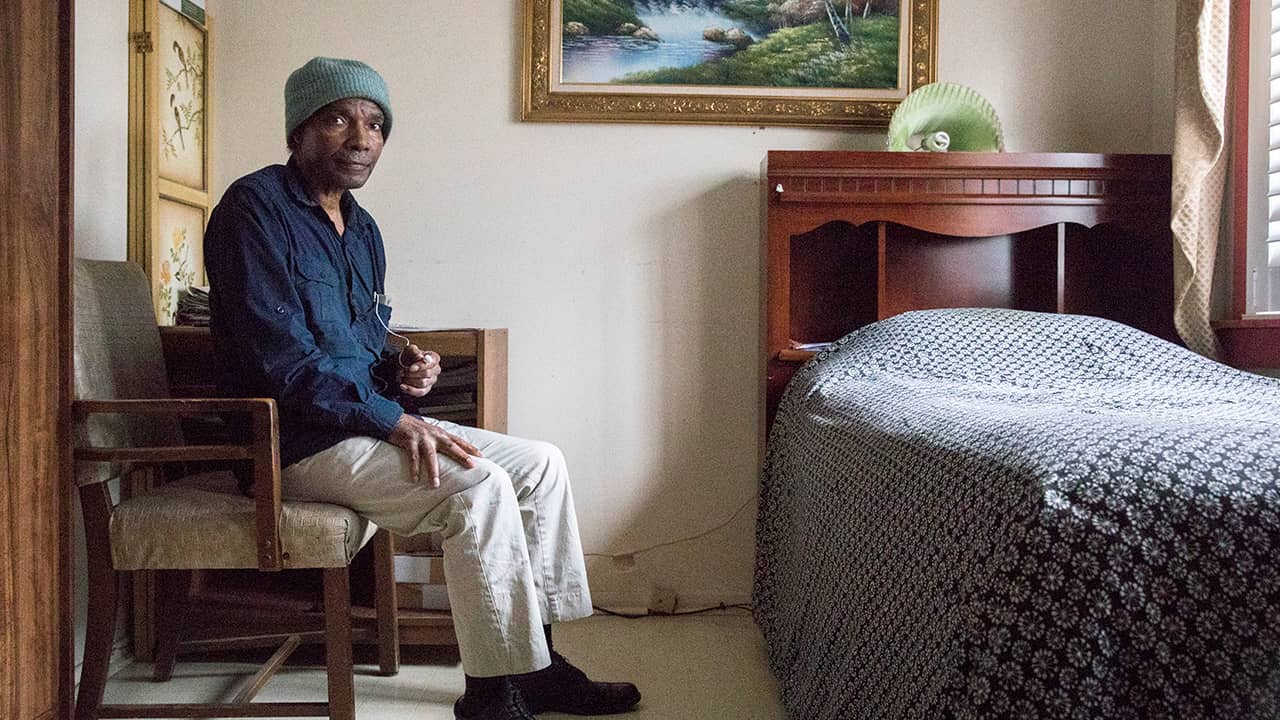 This summer, Tom Gray will lose his home. A slim man with hunched shoulders and a halting voice, Gray, 72, has schizophrenia. Before he landed in Carmen Palarca’s board-and-care home 11 years ago, he spent 20 years living on the streets, many of them huddled in a doorway across from a San Francisco Whole Foods.

“I feel kind of sad and worried a little bit.” — Tom Gray, resident
“I feel kind of sad and worried a little bit,” Gray said quietly, sitting in the home’s small kitchen one recent afternoon.
He hadn’t yet received official notice from Palarca of her plans to close, but knew it was likely. She had, in fact, sent a letter to the city a few days earlier outlining her intent to shutter the home.
The planned closure of yet another board-and-care home—this one nestled near Golden Gate Park—reflects a broader trend affecting thousands of low-income Californians with serious mental illness. While housing values soar and minimum-wage increases drive up staffing costs, state reimbursement rates to board-and-cares have remained stagnant. The result: more facilities are shutting their doors.
There are no reliable statewide data on the decrease of homes serving this specific population. But since 2012, San Francisco has lost more than a third of licensed residential facilities that serve people under 60, and more than a quarter of those serving older clients. Much of the decline has been in small, homelike facilities like Palarca’s, which provide food, laundry and medication help—and are more likely to accept low-income people with mental illnesses.
Los Angeles, which has a large portion of the state’s board-and-cares, has lost more than 200 beds for low-income people with serious mental illness in the past year.

Advocates say the state needs to collect better data—and significantly increase reimbursement rates—if it hopes to save the remaining facilities. Resident Concepcion Wedell makes her way to the kitchen while walking past Setsuko Letchford in the living room at Palarca’s Rest Home in San Francisco. (Jessica Christian/San Francisco Chronicle)

The ‘Not in My Backyard’ Attitude

Licensed board-and-cares, also known as adult residential facilities, receive a government-set monthly rent of $1058—just under $35 a day—from tenants to pay for housing, 24-hour-care and three daily meals. The tenants cover that cost with their monthly Supplemental Security Income(SSI) checks, a combination of federal and state funds for people with serious mental illness, among others.
A report published in January by San Francisco’s Long-Term Care Coordinating Council noted the minimum wage there has increased by 46% since 2012, while the SSI rate for assisted living residents has increased by just 8%. The report estimated the monthly break-even rate for board-and-cares at more than $2,000 per bed, more than double what low-income residents currently pay.
Some counties, including San Francisco and Los Angeles, pay a “patch” using local and state funds to boost this rate to about $1,700 a month. Operators say that’s still not enough.
Dr. Jonathan Sherin, director of the Los Angeles Department of Mental Health, says he’s been “ranting and raving” for years about the “alarming rate” of disappearance of board-and-cares in his city.
“It’s a broken business model,” he said. When homes close, his county scrambles to place the residents elsewhere. But that worsens the backlog for people in jails, hospitals or locked psychiatric facilities waiting for housing in the community.
And once homes are sold, NIMBYism—the “Not in My Backyard” attitude—can make it difficult to open new facilities in the same locations.
Ideally, Palarca said she would like to sell the home where Tom Gray lives to someone willing to maintain it as a board-and-care. But so far, she says, no potential buyer has seen a way to make the numbers work.

There Were Residents Who Initially Refused to Leave

Larry Mateo, 59, once operated five board-and-care homes in San Francisco. By the end of last year, he’d closed them all. Now one is for sale and two others are being rented to young people—”they call them millennials”—who can pay the high rates commanded in the city. Bedbug and Rat Infestations, and a Typhus Outbreak

“The folks we’re talking about, they’re not ready to be successful in supportive housing,” she said. “And they need to start somewhere.”


“I’m settled here. I’m used to it here. I don’t have any place to go. They should find me some place to go.” — Setsuko Letchford, resident
After landing in hospitals due to psychosis, paranoia, and hallucinations in his early 20s, Tristan Scremin was discharged to board-and-care homes. Without this option, Scremin, now 45, speculates he might have ended up on the streets. Instead, he was able to stabilize and now works as a community liaison for Painted Brain, an arts-based mental health agency in Los Angeles.
“I see a lot of seriously mentally ill people on the street who are obviously having difficulty figuring out basic things,” he said. “If I had lost my chance to be in a board-and-care home, if I’d become homeless, I think it would have been very difficult.”
“We’re just really failing this population,” says Molly Davies, Los Angeles County’s long-term care ombudsman. She worries that funding gaps are not only forcing closures, but worsening conditions at board-and-cares that can be “inhumane.”
She’s seen bedbug and rat infestations, and a typhus outbreak.
Regulators are sometimes lenient, she said, because they don’t want to lose more beds. They know that as licensed homes close, unlicensed ones proliferate—with no oversight whatsoever.
At Carmen Palarca’s board-and-care, residents now face the possibility of being relocated to Central Valley communities they’ve never visited.
“I’m settled here. I’m used to it here,” said Setsuko Letchford, 70, who has frizzy gray hair and is missing teeth, and who says she hears voices that constantly badger her. “I don’t have any place to go,” she said. “They should find me some place to go.”

The City Is Aware Closures Can Be Stressful for Residents

Palarca, 77, and her husband, Domingo, 87, bought the seven-bedroom home for $96,000 in 1976, after they moved to San Francisco from the Philippines. Carmen was working as a benefits eligibility worker for the city of San Francisco; Domingo was a mechanic for United Airlines. They wanted additional income to pay for their kids’ college educations.
Now, they want to relax and travel. Still, Palarca worries for Letchford and Gray and the home’s seven other residents. Clients in the home she closed in 2016 were farmed out to other facilities, some outside of the city.
“They didn’t have a choice,” she said.
Kelly Hiramoto, director of transitions for the San Francisco Health Network, says the city is aware closures can be stressful for residents, although she wouldn’t label it a crisis because she said the city is generally able to find alternative placements.
The city subsidizes board-and-care beds for about 500 individuals, she said, starting at an additional $22 a day on top of the SSI rate, with half of those located outside of the county.
Benson Nadell, San Francisco’s long-term care ombudsman, says he expects the city’s remaining board-and-care homes to disappear in the next 15 years, if not sooner, given the current funding model. But he says he’d like to see new models, ones that prioritize programming and independence for the residents, while also addressing the squalor and neglect endemic in many facilities.
Ruelas of the Steinberg Institute also would like to see a dynamic system that provides life skills and activities, not just medication, laundry and food. She thinks Progress Foundation, which offers residential treatment options in San Francisco, Napa and Sonoma, is one model to consider.
Steve Fields, the nonprofit’s executive director, says board-and-care homes should be saved—and transformed into something better. Otherwise, he said, “counties without any imagination go back and reinvent the thing we don’t need anymore.”

Concepción Says She Feels Driven by a Mission

Across the city from Palarca’s closing home, Aurora Concepción is trying to keep hers open.
She’s closed two homes in recent years because of staffing costs, but still has three others.
Brightly lit, with immaculate blonde wood floors and big windows that look out on the Financial District, the homes, perched on a hill in the Portola neighborhood, are much nicer than most board-and-cares, says city ombudsman Nadell.
Concepción, 70, lives among her clients and says she feels driven by a mission.
“What I have is what they have; what I eat is what they eat,” she said. “I always tell them, we are a family here.”
Arriving from the Philippines in 1972, she took a bank job doing data entry. After her daughter was born with multiple sclerosis, she decided to stay home to care for her. She opened her first board-and-care in 1978, then another, then another. At her peak, she cared for 30 people. With the closures, she’s down to 16.
To stay open, she has reduced paid staff from four to one. She and her ex-husband and kids handle shopping, cooking and medications. She washes the laundry at night when utility rates are cheaper, buys food in bulk on sale, and said she hasn’t taken a real vacation in 40 years.

‘They Deserve a Home’

“We’re pinching pennies,” she said. “I make a joke all the time: We’re the cheapest hotel in town.”


“We’re pinching pennies. I make a joke all the time: We’re the cheapest hotel in town.” — Aurora Concepción, board-and-care homes owner
On a recent morning, residents gathered to eat the lunch Concepción had prepared:  salami-and-cheese sandwiches, chicken tomato soup and chocolate sandwich cookies. Silvia Velarde, 59, who has paranoid schizophrenia, said she loves the home, which feels clean and safe and orderly to her. The previous board-and-care she lived in—now closed – was “terrible, really nasty,” she said, and infested with bedbugs.
After lunch, Lori Loo, 56, who has schizophrenia and bipolar disorder and has been living here nine years, waited patiently for Velarde and the others to finish eating. She wanted to set the table for dinner. She said she feels comfortable here, and always volunteers to help clean up because there’s not much else to do.
After lunch, Concepción offered a tour of one of the homes she’s closed. The brightly lit upstairs looks out onto a city panorama. It will doubtless command a fortune in rent on the private market. But Concepción laments that she couldn’t keep it open for residents with mental illness.
“They deserve a second chance,” she said. “They deserve a home.”
About the Author
Jocelyn Wiener is a contributing writer to CALmatters. Photos by Jessica Christian, San Francisco Chronicle. This story, the third in our series “Breakdown: Mental Health in California,” was supported by a grant from the California Health Care Foundation.

Part 1: All too often, California’s default mental institutions are now jails and prisons
Part 2: For families across California, a desperate struggle to get mental health care
CALmatters.org is a nonprofit, nonpartisan media venture explaining California policies and politics.