SAN FRANCISCO — Thousands of tourists could soon have to pay as much as $10 to drive down world-famous Lombard Street in San Francisco.

“We must implement a system that enables both residents and visitors to enjoy the ‘Crookedest Street in the World.” — Assemblyman Phil Ting

City and state officials on Monday announced a bill that would give San Francisco the authority to establish a toll and reservation system for the street that winds down a steep hill, in an effort to reduce crowds and traffic congestion.

“We must implement a system that enables both residents and visitors to enjoy the ‘Crookedest Street in the World,’” said Assemblyman Phil Ting, a San Francisco Democrat who authored the legislation.

Residents say the scenic thoroughfare feels more like an overcrowded amusement park than a neighborhood street. They have been calling for years for officials to address the traffic jams, trash and trespassing by visitors.

In the summer months, an estimated 6,000 people a day visit the 600-foot-long street, creating lines of cars that stretch for blocks, clogging the Russian Hill neighborhood.

“The cars really impact the neighborhood because they line up, they back up, they are sitting idling,” said Greg Brundage, president of the Lombard Hill Improvement Association.

San Francisco transportation officials have proposed requiring visitors to make a reservation online and pay $5 for each vehicle. Another plan calls for online reservations and a $10 charge on weekends and holidays.

The city needs state approval to charge people to use a public road but it would be up to city officials to determine how and what to charge and how to use the funds. The new toll system is not expected to be in place before 2020, officials said. 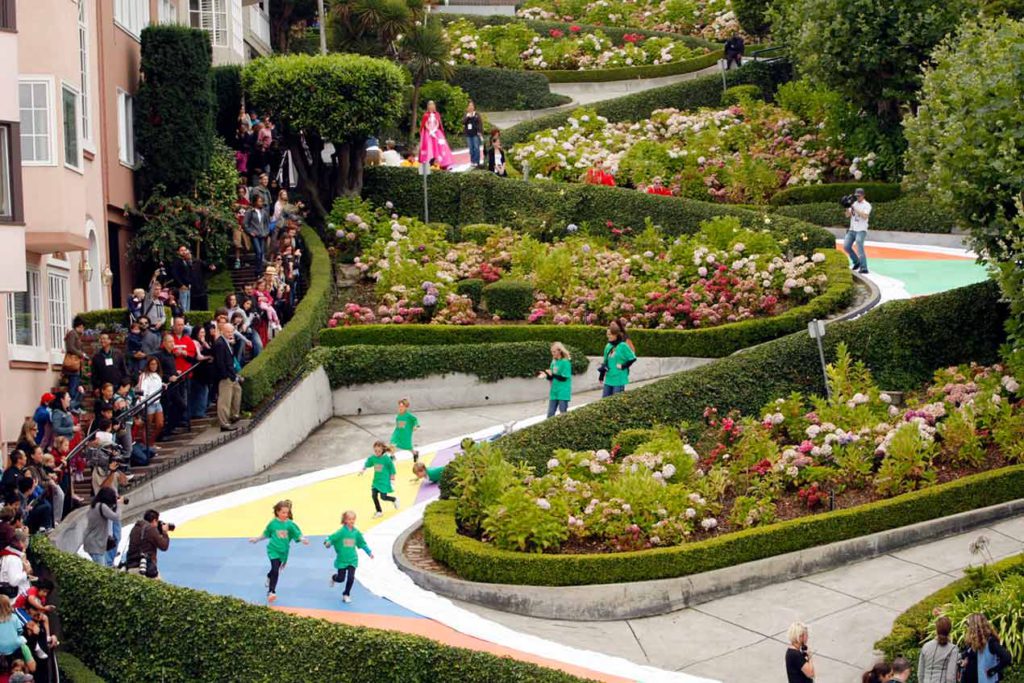 In this Aug. 19, 2009 file photo, children run down Lombard Street in San Francisco, transformed for the day into a gigantic Candy Land board game to commemorate the game’s 60th anniversary.

Dealing With the Traffic Jams Is Half the Problem

Supervisor Catherine Stefani said the fee would help sustain the reservations system and help pay for more traffic control officers, more police patrols in the area and tourism ambassadors who would make sure visitors have a good experience.

“This is one of the top attractions in San Francisco and I’m coming from so far in the world, I would pay and make sure I got to see it.” — Vida Bhatt, a tourist from Melbourne, Australia

“It’s a pilot program but it’s something we must try to address the traffic congestion,” Stefani said.

Vida Bhatt, a tourist from Melbourne, Australia, said she and her family drove down the crooked street, parked their car, then decided to go back and explore the thoroughfare on foot.

“It’s so beautiful! I haven’t seen anything like this anywhere else in the world,” Bhatt said.

Bhatt said she would happily pay to have the experience of driving down Lombard Street.

“This is one of the top attractions in San Francisco and I’m coming from so far in the world, I would pay and make sure I got to see it,” she said.

Residents built the hairpin turns on the red brick road in 1922 because its 27-degree grade was too steep for the era’s cars to climb. Neighbors added lush gardens filled with hydrangeas and roses 30 years later.

The sweeping views and the fact that a cable car stops at the top of the street contributed to its popularity. Its worldwide fame only increased after it was featured in movies and commercials.

Brundage, who has lived on the street for 22 years, said dealing with the traffic jams is half the problem. He also would like to see something done about the buses that drop off tourists but is glad to see some progress on addressing the situation.

“This is a pilot program but we’re really excited this day has come,” he said.