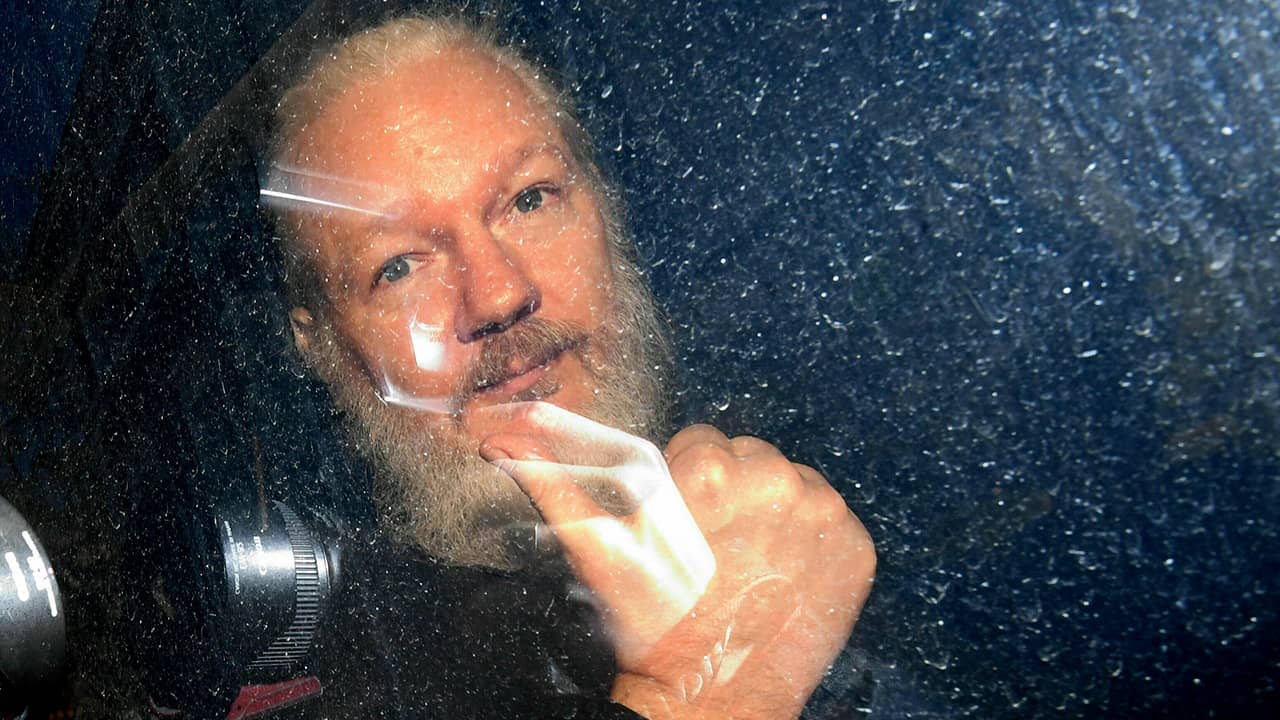 LONDON — WikiLeaks founder Julian Assange was forcibly bundled out of the Ecuadorian Embassy in London and into a British police van on Thursday, setting up a potential court battle over attempts to extradite him to the U.S. to face charges related to the publication of tens of thousands of secret government documents.
Police arrested Assange after the South American nation decided to revoke the political asylum that had given him sanctuary for almost seven years. Ecuador’s President Lenin Moreno said he took the action due to “repeated violations to international conventions and daily life.”
In Washington, the U.S. Justice Department accused Assange with conspiring with Chelsea Manning to break into a classified government computer at the Pentagon. The charge was announced after Assange was taken into custody.
His lawyer has previously said that Assange planned to fight any U.S. charges against him.
Assange took refuge in the embassy in 2012 after he was released on bail in Britain while facing extradition to Sweden on sexual assault allegations that have since been dropped. He refused to leave the embassy, fearing arrest and extradition to the U.S. for publishing classified military and diplomatic cables through WikiLeaks. Police carry WikiLeaks founder Julian Assange from the Ecuadorian embassy in London after he was arrested by officers from the Metropolitan Police and taken into custody Thursday April 11, 2019. Police in London arrested WikiLeaks founder Assange at the Ecuadorean embassy Thursday, April 11, 2019 for failing to surrender to the court in 2012, shortly after the South American nation revoked his asylum. (@DailyDOOH/PA via AP)

Over the years, Assange used the embassy as a staging post to keep his name before the public, frequently making appearances on its tiny balcony, posing for pictures and reading statements. Even his cat became well-known. The Grand Jury Indictment against Julian Assange, released by the U.S. Department of Justice, Thursday, April 11, 2019, is photographed in Washington. The U.S. Justice Department has charged WikiLeaks founder Julian Assange with conspiring with Chelsea Manning to break into a classified government computer. (AP Photo/Wayne Partlow)

Assange Has Been Under U.S. Justice Department Scrutiny for Years

Moreno said in a video posted on Twitter that Ecuador was no longer willing to give Assange protection. Other Ecuadorian officials in Quito accused supporters of WikiLeaks and two Russian hackers of trying to destabilize the country. A police car parked outside the Ecuadorian Embassy in London, after WikiLeaks founder Julian Assange was arrested by officers from the Metropolitan Police and taken into custody Thursday April 11, 2019. (John Stillwell/PA via AP)

Assange’s arrest came a day after WikiLeaks accused the Ecuador’s government of an “extensive spying operation” against him. WikiLeaks claims that meetings with lawyers and a doctor inside the embassy over the past year were secretly filmed.
In Quito on Thursday, Ecuador’s government denounced what they called attempts by supporters of WikiLeaks and two Russian hackers to destabilize their country as its standoff with Assange intensified in recent weeks.
Ecuador Interior Minister Maria Paula Romo said a close collaborator of WikiLeaks had traveled with former Foreign Minister Ricardo Patino this year to several countries — including Peru, Spain and Venezuela — in an attempt to undermine the Ecuadorian government. She did not identify the person but said their name and those of the two Russian hackers working in Ecuador would be turned over to judicial authorities.
She also said Ecuador’s embassy in Spain and other diplomatic missions abroad have received threats related.
Assange’s arrest drew a mixed reaction.
British Foreign Secretary Jeremy Hunt thanked Moreno for breaking the impasse, saying on Twitter that Assange “is no hero and no one is above the law.”

Russia Wants Assange’s Rights to Be Protected Following His Arrest

But Edward Snowden, the former security contractor who leaked classified information about U.S. surveillance programs, called Assange’s arrest a blow to media freedom.
“Images of Ecuador’s ambassador inviting the U.K.’s secret police into the embassy to drag a publisher of —like it or not — award-winning journalism out of the building are going to end up in the history books,” Snowden said in a tweet.
“Assange’s critics may cheer, but this is a dark moment for press freedom,” Snowden said from Russia, which has granted him permission to stay there while he is wanted by the U.S.
Russian President Vladimir Putin’s spokesman said Russia wants Assange’s rights to be protected following his arrest. Dmitry Peskov told reporters that he could not comment on the overall case but “we of course hope that all of his rights will be observed.”
An independent U.N. human rights expert said he won’t relent in his efforts to determine whether Assange’s privacy rights were violated at the embassy in London. Joe Cannataci, the special rapporteur on privacy, had planned to travel to London on April 25 to meet with Assange and said he still planned to do so — wherever Assange is at the time.
“I will visit him and speak to him in a police station or elsewhere in the U.K. where he may be held,” Cannataci said.