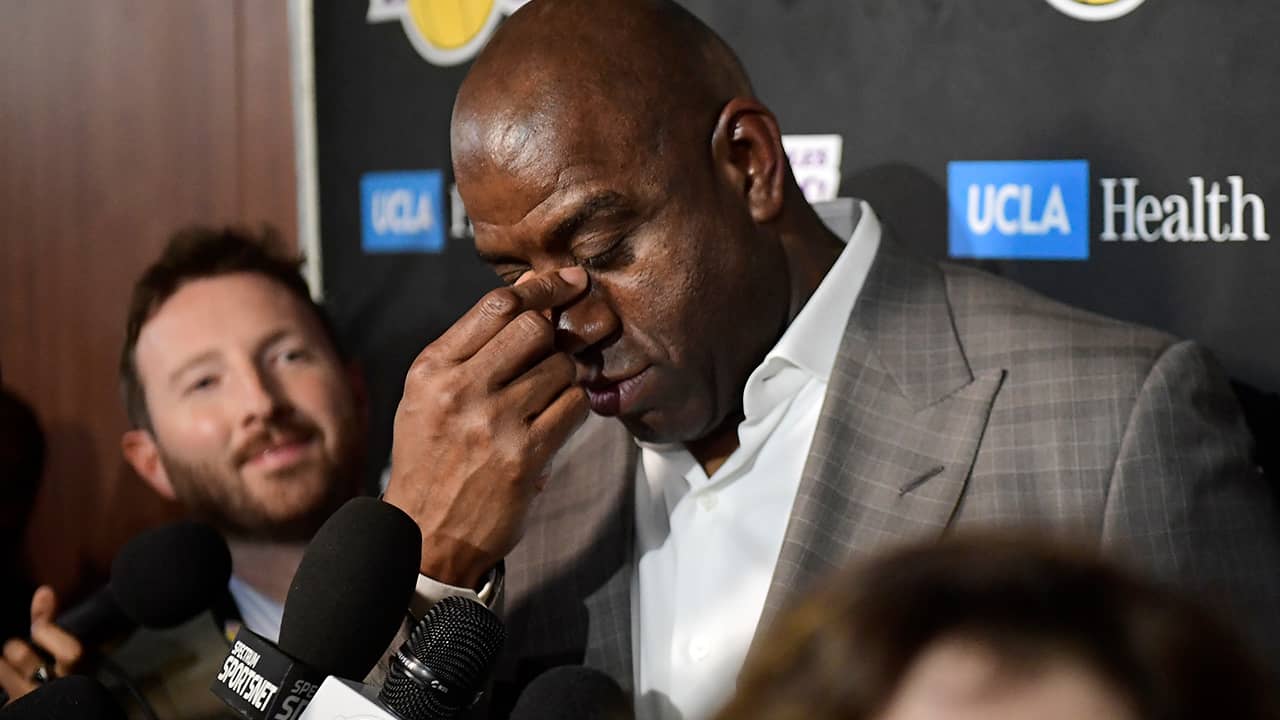 LOS ANGELES — Magic Johnson abruptly quit as the Los Angeles Lakers’ president of basketball operations Tuesday night, citing his desire to return to the simpler life he enjoyed as a wealthy businessman and beloved former player before taking charge of this tempestuous franchise just over two years ago.

The Lakers Also Issued a Team Statement at Halftime

Johnson and Buss had a three-hour meeting Monday about the direction of the 16-time NBA champion Lakers, who haven’t made the postseason since 2013. Magic claimed he didn’t finalize his decision until Tuesday morning.
“Somebody is going to have to tell my boss, because I know she’s going to be sick,” Johnson said. “But I knew I couldn’t face her face-to-face and tell her.”
Buss didn’t attend the Lakers’ season finale, although Johnson waited by the executive parking area at Staples Center in hopes of seeing her. Buss tweeted her reaction at halftime.
“Earvin, I loved working side by side with you,” Buss wrote. “You’ve brought us a long way. We will continue the journey. We love you.”
Walton, who is 98-148 in three seasons, refused to say much about Johnson’s announcement after the loss to Portland: “I found out when you guys did. It was 80 minutes before the game … and I haven’t had any time to really process it.”
Clearly blindsided by Johnson’s announcement, the Lakers also issued a team statement at halftime.
“There is no greater Los Angeles Laker than Earvin Johnson,” it said. “We are deeply grateful to Magic for all that he has done for our franchise as a player, an ambassador and an executive. … He will always be not only a Lakers icon, but our family. As we begin the process of moving forward, we will work in a measured and methodical fashion to make the right moves for the future of our organization.”
Johnson’s desire for his old life wasn’t the only reason for his departure. He also said he is tired of being investigated or fined by the NBA for tampering when he comments on basketball on Twitter or even speaks to another organization’s player.

Johnson, a longtime broadcaster and respected basketball figure before moving into the front office, has been investigated four times for tampering after everything from a joking comment about Paul George on Jimmy Kimmel’s talk show to his response to an email sent to him by Philadelphia’s Ben Simmons.

Johnson was hired along with Pelinka when Buss dismissed her brother, Jim, and GM Mitch Kupchak just 26 months ago. The Buss children’s father, Jerry, had long envisioned Johnson in a powerful role in the Lakers’ front office, and Jeanie put Magic in charge of shaking up her storied franchise in decline.
Immediately after taking the job, Johnson stated his plan to land at least two free-agent superstars to return the Lakers to immediate title contention. That plan rankled feelings around the league and got him in trouble when he publicly acknowledged the Lakers’ interest in George, which led to an investigation that eventually stuck the Lakers with a $500,000 fine for Pelinka making improper contact with George’s agent.
Johnson made several personnel moves to clear salary cap space for his ultimate goal, notably trading guard D’Angelo Russell to Brooklyn largely to rid the Lakers of Timofey Mozgov’s onerous contract in 2017.
Johnson also criticized Russell for his maturity and playing style on the way out the door, but Russell has blossomed into an All-Star leader for the playoff-bound Nets. Some of Johnson’s other moves have worked out much better, including the Lakers’ drafting of Lonzo Ball, the acquisition of Kyle Kuzma and the bargain signing of center JaVale McGee.
And though James was in charge of his decision to join the Lakers last summer, LeBron credited Magic with closing the deal in a meeting before he agreed to a four-year contract.
But after James strained his groin at Christmas and subsequently sat out for the longest injury absence of his 16-year NBA career, the Lakers were unable to compile enough midseason wins to stay in playoff contention. The Lakers also slumped before the trade deadline when Johnson aggressively pursued disgruntled New Orleans superstar Anthony Davis in a trade that would have required the Lakers to give up much of their talented young core.

The Lakers Compiled Their Best Record in Six Years This Season

James was shut down for the season late last month, and he watched the Lakers’ season finale in street clothes on the bench. He wasn’t available to reporters after the game.