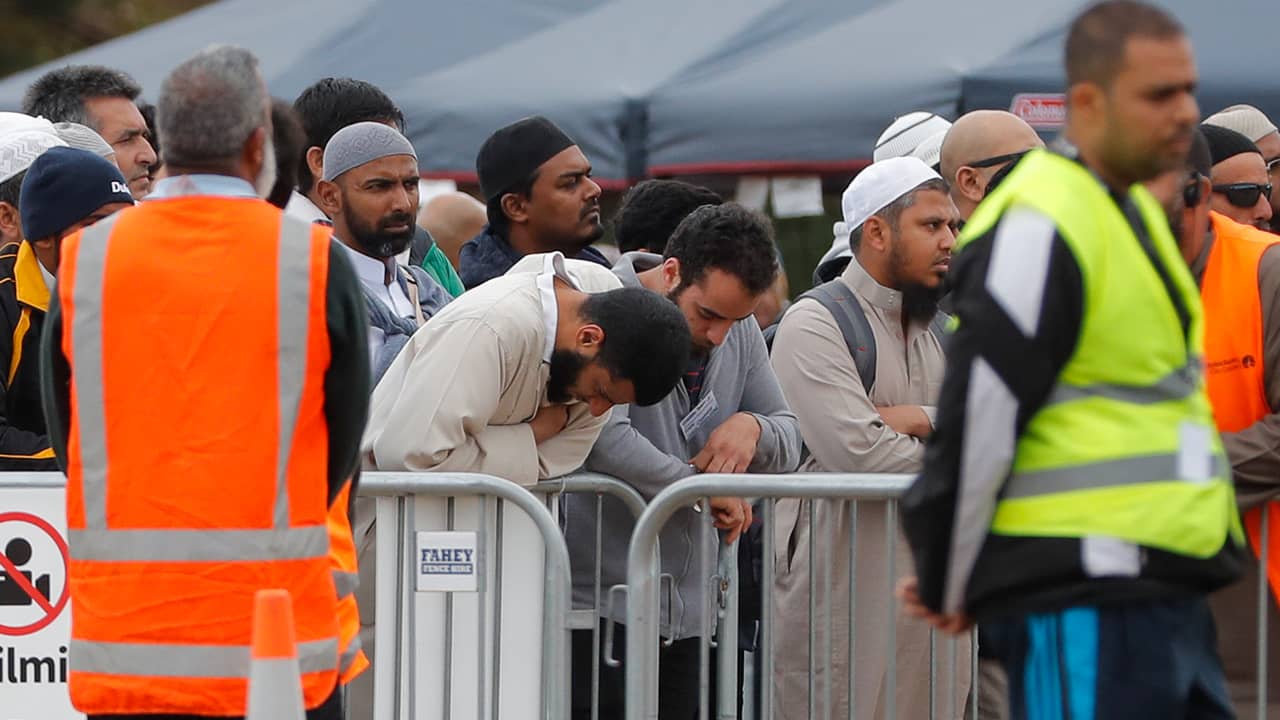 CHRISTCHURCH, New Zealand — In a day without precedent, people across New Zealand were planning to observe the Muslim call to prayer Friday as the nation reflected on the moment one week ago when 50 people were slaughtered at two mosques.

“As soon as I got off the plane, I saw a sign someone was holding that said ‘jenaza,’ denoting Muslim funeral prayer. Others were offering free rides to and from the prayer service.” — Fahim Imam, 33, of Auckland

Prime Minister Jacinda Ardern and thousands of others planned to congregate in leafy Hagley Park opposite the Al Noor mosque in Christchurch to observe the call to prayer at 1:30 p.m.

Thousands more were planning to listen in on the radio or watch on television as the event was broadcast live. The prayer was to be followed by two minutes of silence.

Fahim Imam, 33, of Auckland, flew in Friday morning from New Zealand’s largest city for the service. He was born and grew up in Christchurch but moved away three years ago.

“It’s just amazing to see how the country and the community have come together — blows my mind, actually,” Imam said before the event.

“As soon as I got off the plane, I saw a sign someone was holding that said ‘jenaza,’ denoting Muslim funeral prayer. Others were offering free rides to and from the prayer service,” Imam said.

“The moment I landed in Christchurch, I could feel the love here. I’ve never felt more proud to be a Muslim, or a Kiwi for that matter. It makes me really happy to be able to say that I’m a New Zealander,” he added.

He called it surreal to see the mosque where he used to pray surrounded by flowers.

The observance comes the day after the government announced a ban on “military-style” semi-automatic firearms and high-capacity magazines like the weapons that were used in last Friday’s attacks.

At least 42 people died at the Al Noor mosque and at least seven others at the nearby Linwood mosque after a white supremacist gunned them down.

An immediate sales ban went into effect Thursday to prevent stockpiling, and new laws would be rushed through Parliament that would impose a complete ban on the weapons, Ardern said.

“Every semi-automatic weapon used in the terrorist attack on Friday will be banned,” Ardern said.

Liberals and Conservatives Back the Ban

The gun legislation is supported not only by Ardern’s liberal Labour Party but also the conservative opposition National Party, so it’s expected to pass into law. New Zealand does not have a constitutional right to bear arms.

Among those planning to attend Friday’s observance was Samier Dandan, the president of the Lebanese Muslim Association in Sydney and part of a 15-strong delegation of Muslim leaders that had flown to Christchurch.

“It was an ugly act of terrorism that occurred in a beautiful, peaceful city,” Dandan said.

He said his pain couldn’t compare with that of the families he’d been visiting who had lost loves ones. He was inspired by their resilience, he said.

“And I’ve got to give all my respect to the New Zealand prime minister, with her position and her actions, and it speaks loud,” he said.

Ismat Fatimah, 46, said it was sad to look at the Al Noor mosque, which was still surrounded by construction barricades, armed police officers and a huge mound of flowers and messages.

“We’re feeling stronger than before, and we are one,” she said.

There Are Nearly 250,000 Licensed Gun Owners in New Zealand

She said she prayed for the people who died.

“I’m just imagining what would be happening last Friday,” she said. “People were running around so scared and helpless. It’s just not right.”

Erum Hafeez, 18 said she felt comforted by the overwhelming response from New Zealanders to the tragedy:

“We are embraced by the community of New Zealand, we are not left behind and alone.”

Ardern said people could hand over their prohibited guns under an amnesty while officials develop a formal buyback scheme, which could cost up to 200 million New Zealand dollars ($140 million).

The government said the police and military would be exempt. Access for international shooting competitions would also be considered.

The man charged in the mosque attacks had purchased his weapons legally using a standard firearms license and enhanced their capacity by using 30-round magazines “done easily through a simple online purchase,” Ardern said.

Although the exact weapons used in the mosque attacks have not been announced, images posted by the gunman show at least one of them to be a semi-automatic rifle similar to an AR-15 that is widely available in New Zealand.

Ardern’s announcement came as authorities said all 50 bodies from the attacks were formally identified.

A 28-year-old Australian white supremacist, Brenton Harrison Tarrant, was arrested by police who ran him off the road while he was believed to be on his way to a third target. He had livestreamed the attack on Facebook and said in his manifesto he planned to attack three mosques.

Tarrant, 28, is next scheduled to appear in court on April 5, and Bush said investigations were continuing. Police have said they are certain Tarrant was the only gunman but are still investigating whether he had support. He has been charged with one count of murder and more charges are expected to follow.

Workers at the Al Noor mosque have been working feverishly to repair the destruction from the attacks, said imam Gamal Fouda.

“They will bury the carpet,” he said, “because it is full of blood, and it’s contaminated.”

Fouda said he expects the mosque to be open again by next week and that some skilled workers had offered their services for free.

The gun prohibition includes semi-automatic guns or shotguns that can be used with a detachable magazine that holds more than five rounds. It also applies to accessories used to convert guns into what the government called “military-style” weapons.

When Will ‘All Means All’ Happen at Starr Elementary?