CHRISTCHURCH, New Zealand — The government of New Zealand announced a ban on “military-style” semi-automatic firearms and high-capacity magazines Thursday, just a week after such weapons were used in attacks on two mosques in the city of Christchurch that killed 50 people.

“Every semi-automatic weapon used in the terrorist attack on Friday will be banned.” — Prime Minister Jacinda Ardern

An immediate sales ban went into effect to prevent stockpiling and new laws would be rushed through Parliament that would impose a complete ban on the weapons, Prime Minister Jacinda Ardern said.

“Every semi-automatic weapon used in the terrorist attack on Friday will be banned,” Ardern said.

The prohibition includes semi-automatic guns or shotguns that can be used with a detachable magazine that holds more than five rounds. It also applies to accessories used to convert guns into what the government called “military-style” weapons.

Ardern’s party controls a majority in Parliament, so passage of the legislation is expected. New Zealand does not have a constitutional right to bear arms. 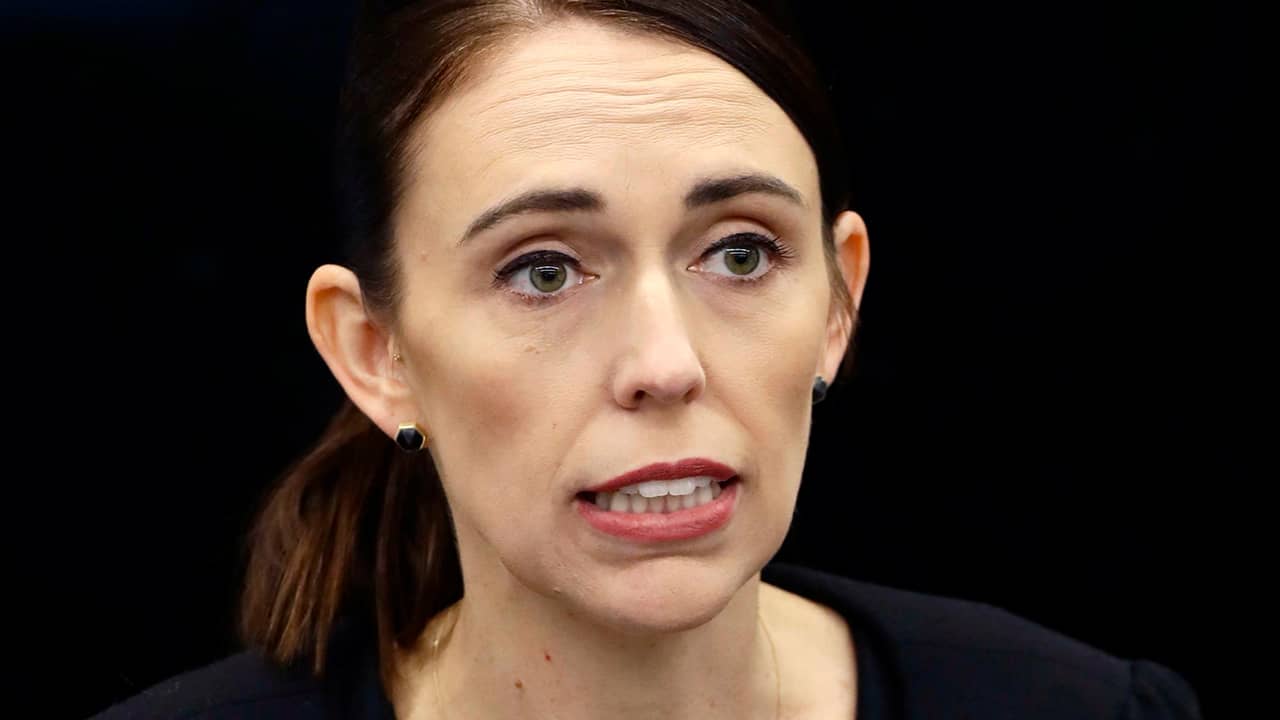 Immediate Comparisons to the United States

Polly Collins of Christchurch was thrilled to hear of Ardern’s announcement as she visited a memorial to the victims.

“The prime minister is amazing,” she said. “It’s not like in America, where they have all these things and then they go ‘Oh yeah, we’ll deal with the gun laws,’ and nothing’s done.”

“While we have sold them in the past to a small number of customers, last week’s events have forced a reconsideration that has led us to believe such weapons of war have no place in our business — or our country,” chief executive Darren Jacobs said in a statement.

He said the company will no longer stock any assault-style firearms and will also stop selling firearms online.

“What (Ardern’s) done is a very brave move, and it’s the kind of move that can only be done in a common-law country where guns are not a right,” said Alexander Gillespie, a professor of international law at Waikato University. “Guns are a real privilege. If there was a legal right like there is in the United States, this would be much more difficult.”

“What (Ardern’s) done is a very brave move, and it’s the kind of move that can only be done in a common-law country where guns are not a right. Guns are a real privilege. If there was a legal right like there is in the United States, this would be much more difficult.” — Alexander Gillespie, a professor of international law at Waikato University

Ardern said people could hand over their prohibited guns under an amnesty while officials develop a formal buyback scheme, which could cost up to 200 million New Zealand dollars ($140 million). She said there will be “tightly regulated” exemptions for some owners such as hunters and farmers.

The government said the police and military would be exempt. Access for international shooting competitions would also be considered.

The man charged in the mosque attacks had purchased his weapons legally using a standard firearms license and enhanced their capacity by using 30-round magazines “done easily through a simple online purchase,” Ardern said.

Although the exact weapons used in the mosque attacks have not been announced, images posted by the gunman show at least one of them to be a semi-automatic rifle similar to an AR-15 that is widely available in New Zealand. Semi-automatic refers to a firearm’s ability to self-load, not only firing a bullet with each trigger pull, but also reloading and making the firearm capable of firing again.

Many Firearms Can Be Semi-Automatic

The military versions most resembling the AR-15 rifle are the M16 and M4 carbines, which can fire in semi-automatic mode, three-round burst mode or fully automatic mode.

Many different types of firearms, from pistols to rifles and shotguns, can be semi-automatic. Semi-automatic rifles like the AR-15 can often be modified with aftermarket parts to fire in fully automatic mode and instructions can often be found on the internet.

Ardern’s announcement came as authorities said all 50 bodies from the attacks were formally identified.

At least nine funerals took place Thursday. Solemn farewells were made for high school student Sayyad Ahmad Milne, 14. Tariq Rashid Omar, 24, graduated from the same school, played soccer in the summer and was a beloved coach of several youth teams and also was buried.

In a post on Facebook, Christchurch United Football Club Academy Director Colin Williamson described Omar as “a beautiful human being with a tremendous heart and love for coaching.”

Linda Armstrong, 64, a third-generation New Zealander who converted to Islam in her 50s, was also buried, as were Hussein Mohamed Khalil Moustafa, 70, Matiullah Safi, 55, and Haji Mohammed Daoud Nabi.

Police Commissioner Mike Bush said investigators were trying to conclude their work at the two mosques. 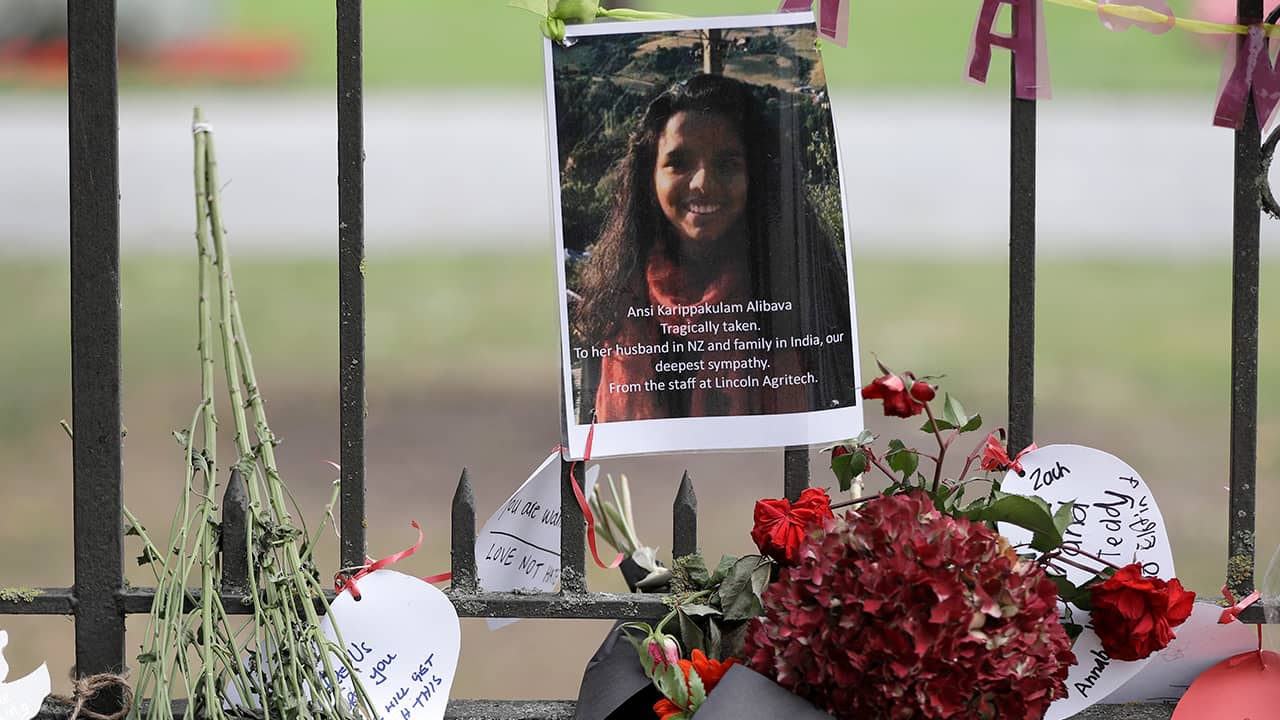 A tribute of a victim of mosque shooting, Ansi Alibava, hangs on a wall at the Botanical Gardens in Christchurch, New Zealand, Thursday, March 21, 2019. Thousands of people were expected to come together for an emotional Friday prayer service led by the imam of one of the two New Zealand mosques where 50 worshippers were killed in a white supremacist attack on Friday March 15. (AP Photo/Mark Baker)

Shooter Was Arrested on His Way to a Third Target

“We are working to restore them in a way that is absolutely respectful,” he said.

An Australian white supremacist, Brenton Harrison Tarrant, was arrested by police who ran him off the road while he was believed to be on his way to a third target. He had livestreamed the attack on Facebook and said in his manifesto he planned to attack three mosques.

“They will bury the carpet because it is full of blood, and it’s contaminated.” — Imam Gamal Fouda

Tarrant, 28, is next scheduled to appear in court on April 5, and Bush said investigations were continuing. Police have said they are certain Tarrant was the only gunman but are still investigating whether he had support.

Meanwhile, preparations were underway for a Friday prayer service to be led by the imam of one of the mosques where worshippers were killed. Imam Gamal Fouda said he is expecting 3,000 to 4,000 people, including many from abroad.

Workers at the Al Noor mosque have been working feverishly to repair the destruction, Fouda said.

“They will bury the carpet,” he said, “because it is full of blood, and it’s contaminated.”

Fouda said he expects the mosque to be open again by next week and that some skilled workers had offered their services for free.