LOS ANGELES — Hal Blaine, the Hall of Fame session drummer and virtual one-man soundtrack of the 1960s and ’70s who played on the songs of Frank Sinatra, Elvis Presley and the Beach Boys and laid down one of music’s most memorable opening riffs on the Ronettes’ “Be My Baby,” died Monday.

“Hal Blaine was such a great musician and friend that I can’t put it into words. Hal taught me a lot, and he had so much to do with our success — he was the greatest drummer ever.” — The Beach Boys’ Brian Wilson

Blaine died of natural causes at his home in Palm Desert, California, his son-in-law, Andy Johnson, told The Associated Press. He was 90.

On hearing of his death, the Beach Boys’ Brian Wilson called him “the greatest drummer ever.”

The winner of a Grammy Lifetime Achievement Award last year, Blaine’s name was known by few outside the music industry, even in his prime.

But just about anyone with a turntable, radio or TV heard his drumming on songs that included Presley’s “Return to Sender,” the Byrds’ “Mr. Tambourine Man,” Barbra Streisand’s “The Way We Were,” the Beach Boys’ “Good Vibrations,” dozens of hits produced by Phil Spector, and the theme songs to “Batman,” ”The Partridge Family” and dozens of other shows.”

“Hal Blaine was such a great musician and friend that I can’t put it into words,” Wilson said in a tweet that included an old photo of him and Blaine sitting at the piano. “Hal taught me a lot, and he had so much to do with our success — he was the greatest drummer ever.”

As a member of the Los Angeles-based studio band “The Wrecking Crew,” which also featured keyboard player Leon Russell, bassist Carol Kaye and guitarist Tommy Tedesco, Blaine forged a hard-earned virtuosity and versatility that enabled him to adapt quickly to a wide range of popular music. According to the Rock & Roll Hall of Fame, he played on 40 No. 1 hits and 150 top 10 songs.

Blaine also played on eight songs that won Grammys for record of the year, including Sinatra’s “Strangers In the Night” and Simon & Garfunkel’s “Bridge Over Troubled Water.”

He may be the only drummer to back Presley, Sinatra and John Lennon.

“Godspeed Old Friend,” Sinatra’s daughter Nancy Sinatra said alongside an Instagram picture she posted of Blaine backing her up as she sang.

Some accounts have Blaine playing on 35,000 songs, but he believed that around 6,000 was more accurate, still making him a strong contender for the most recorded drummer in history. In 2000, he was inducted into the Rock Hall of Fame.

Out of so many notable sessions, his signature moment was the attention-grabbing “on the four” solo — Bum-ba-bum-BOOM — that launched the classic “Be My Baby,” a hit for the Ronettes in 1963 that helped define Spector’s overpowering “Wall of Sound” productions.

Few drum parts have been so widely imitated, from Billy Joel’s “Say Goodbye to Hollywood” to The Jesus and Mary Chain’s “Just Like Honey.” 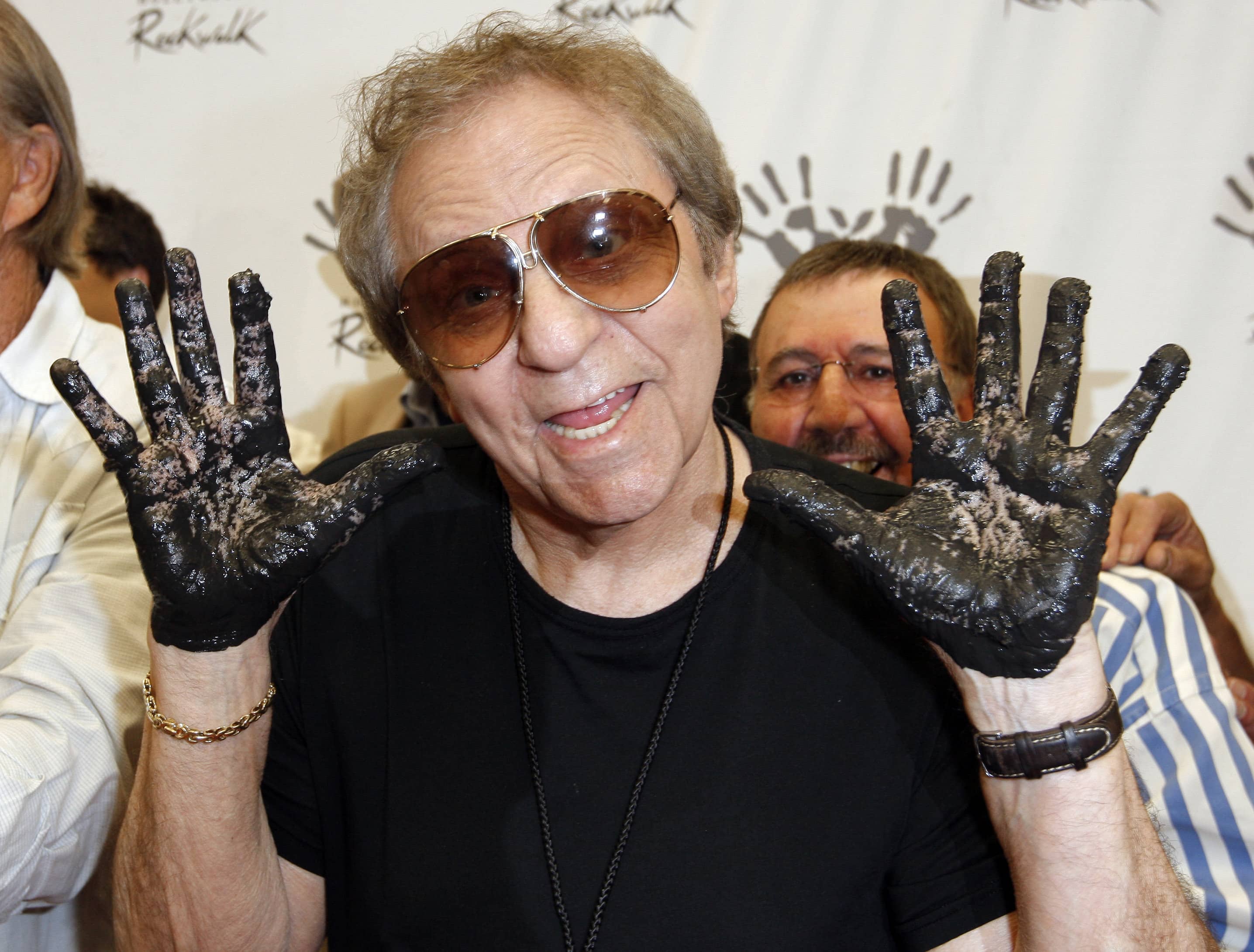 FILE – In this June 25, 2008, file photo, Hal Blaine holds up his hands covered in cement after placing them in wet cement with Don Randi and Glen Campbell, representing The Wrecking Crew following an induction ceremony for Hollywood’s RockWalk in Los Angeles. Drummer Blaine, who played on many of the biggest hits in music history, has died. Blaine’s son-in-law Andy Johnson tells The Associated Press that Blaine died of natural causes Monday, March 11, 2019, at his home in Palm Desert, California. He was 90. (AP Photo/Kevork Djansezian, File)

Many Younger Drummers Counted Him as a Friend and Mentor

In a 2005 interview with Modern Drummer magazine, Blaine said that he wasn’t quite sure how he came up with the solo. To the best of his memory, he accidentally missed a beat while the song was being recorded and improvised by only playing the beat on the fourth note.

“And I continued to do that,” he recalled. “Phil might have said, ‘Do that again.’ Somebody loved it, in any event. It’s just one of those things that sometimes happens.”

“Hal was funny, sweet, and genuine. He made you feel like you were the most important person in the room. His inspiration and influence to drummers everywhere is immeasurable. Hal was a treasure.” — Jon “Bermuda” Schwartz, drummer for the “Weird Al” Yankovic Band

Blaine nicknamed himself and his peers “The Wrecking Crew,” because they were seen by their more buttoned-down elders as destructive to the industry — an assertion that Kaye and others disputed. Many members of The Wrecking Crew worked nonstop for 20 years, sometimes as many as eight sessions a day, a pace that led to several marriages and divorces for Blaine.

As more bands played on their own records and electronic drums arose, business dropped off in the 1980s even as younger musicians, such as Max Weinberg of the E Street Band, cited his influence.

His memoir, “Hal Blaine & The Wrecking Crew,” came out in 1990 and he continued to appear at symposiums and workshops into his 80s. Blaine also was seen in the 2008 documentary “The Wrecking Crew” and was played by Johnny Sneed in the Wilson biopic “Love & Mercy.”

Many younger drummers counted him as a friend and mentor.

“Hal was funny, sweet, and genuine,” Jon “Bermuda” Schwartz, drummer for the “Weird Al” Yankovic Band, said in email to the AP. “He made you feel like you were the most important person in the room. His inspiration and influence to drummers everywhere is immeasurable. Hal was a treasure.”

He Was a Professional by Age 20

By age 8, he was already drumming, using a pair of dowels he removed from a seat in the living room.

He was a professional by age 20 and within a few years switched from jazz to rock.

The use of session musicians became a scandal in the late 1960s when it was discovered that the Monkees, the million-selling TV foursome, did not play on their songs. Blaine, who, of course, drummed for the Monkees, knew that many top groups depended on him and his peers. He even became friendly with some of the players he sat in for, including Wilson’s brother Dennis Wilson.

“He was thrilled that I was making their records because while I was making Beach Boy records, he was out surfing or riding his motorcycle,” Blaine told Modern Drummer.

Blaine told the magazine that Bruce Gary, who played drums in the Knack, was once asked who his favorite drummer was.

“He was never so disappointed in his life to find out that a dozen of his favorite drummers were me.”

Blaine is survived by his daughter Michelle Blaine, and seven grandchildren.