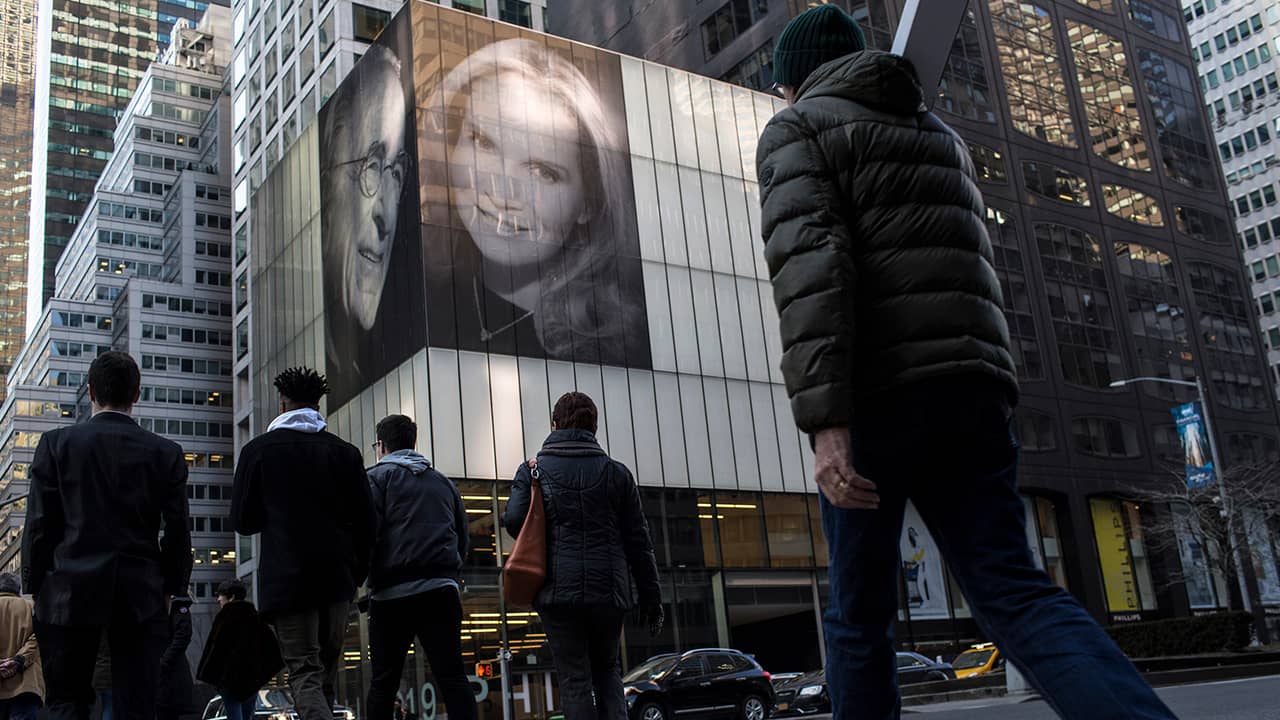 NEW YORK — They measure 24 feet wide and 42 feet high, which makes them taller than a telephone pole but 3 feet shorter than the letters in the Hollywood sign.

The two photographs, according to the recently divorced and newly remarried man who had them installed last week on one of the tallest residential buildings in the Western Hemisphere, are “a proclamation of love.”

“He could have done something much better, something that would attract people’s attention.” — Bronx resident Allen Gross

That man is real estate developer Harry Macklowe, who is pictured in one of the photographs and was married for the second time Thursday after a contentious 14-week divorce trial. His new wife, the woman in the other photograph, is Patricia Landeau, president of the French Friends of the Israel Museum. Macklowe built the building where the images appear, 432 Park Ave.

Macklowe, 81, said Saturday that he had bid $2,000 at a charity auction for photographs by Studio Harcourt in Paris. He loved the results — “My wife looks gorgeous, and I love the picture of me,” he said Saturday — and began thinking about ways to show them off.

“Since I wasn’t getting married during the summer in the Hamptons,” he said, “I wasn’t able to hire an airplane with a banner to go up and down the shoreline. I thought: ‘I own a building. Why don’t I just hang a banner from my own building?’”

So he did. A sign company printed the images on polyester mesh and placed them on the Park Avenue Cube, a white-glass structure that is part of 432 Park Ave. and is to be occupied by the auction house Phillips. The images look out from the northwest corner of Park Avenue and East 56th Street.

It did not take long for the tabloids to notice. “Macklowe puts new wife’s pic on Park Ave. bldg. where ex nixed apt,” The New York Post wrote.

“Ex” was a reference to Macklowe’s first wife, Linda. They were married for more than 50 years before a public breakup in 2016 that preceded the divorce trial.

It ended in December when Justice Laura Drager of state Supreme Court in Manhattan ordered their $2 billion fortune divided. That means selling what the judge called “an internationally renowned collection” of modern art they had amassed over the years. It includes works by Jean-Michel Basquiat, Alberto Giacometti, Pablo Picasso and Andy Warhol.

Linda Macklowe, an honorary trustee of the Metropolitan Museum of Art and a vice president and trustee of the Guggenheim Museum, was not required to go through with the planned purchase of an apartment in the building that is now adorned by the images of Harry Macklowe and his new wife.

The first wife had had a contract to buy the apartment on the 78th floor of 432 Park Ave., but another court had permitted her to exit the deal, according to the judge in the divorce settlement. The divorce court awarded Linda Macklowe the couple’s condominium in the Plaza Hotel — created by joining seven apartments they bought in 2007 and valued by the court at $72 million — but gave Harry Macklowe a $36 million credit on it.

Macklowe said Saturday that some of his male friends had told him their wives now wanted the big-picture treatment. He said some of his female friends had said the same thing. “I got an email from a neighbor across the street who said, ‘I want my husband to do this for me for Valentine’s Day,’” he said.

If the photographs are like an art installation, the reviews from passers-by on Park Avenue were mixed.

“If you have the money and you want to do it, go ahead,” said Halle Mae Nottage, a college student from Kailua-Kona, Hawaii. “But it’s devastating to see people spend such money on such shallow things when there are bigger and more pressing issues on which money can be spent.”

Teya Goakey, a graphic design student from Port Angeles, Washington, said she would not want her portrait on the side of a building. “It’s weird to see,” she said, “and I feel like if I had that kind of money, I wouldn’t need the whole of New York City see my and my other half’s face on the side of a building. That’s a private thing. I wouldn’t need the whole city to know of my wedding.”

How Long Will Photos Stay Up?

Allen Gross of the Bronx was unimpressed. “He could have done something much better,” he said, “something that would attract people’s attention.”

“That’s not going to do it,” he said, looking up at the two photographs and apparently concluding that they were too discreet.

But Eric Torres, who delivers groceries for FreshDirect, said he would do the same thing if he had the money — and a wife.

The newlyweds’ love may be everlasting, but the photographs will not be. Macklowe said he had not decided how long the images would adorn the building.