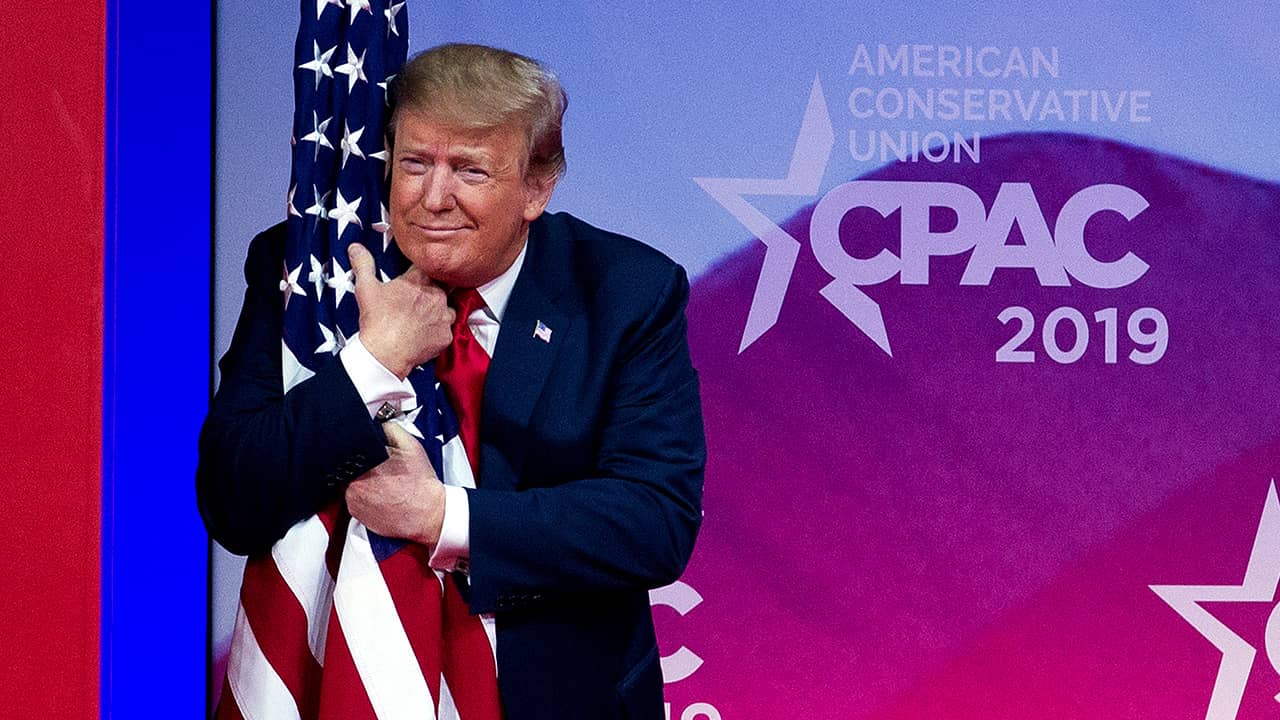 WASHINGTON — President Donald Trump uttered a dizzying number of false statements in his epically long weekend speech, to an audience that didn’t seem to mind at all.

He got the unemployment rate wrong. He misstated his winning margin in the election. He reprised some of his most frequently told fictions and dusted off old ones, even going back to the size of his inauguration crowd.

A look at some of his words in his two-hour-plus speech to the Conservative Political Action Conference on Saturday:

TRUMP: “We’re down to 3.7 percent unemployment, the lowest number in a long time.”

THE FACTS: The unemployment rate is 4 percent. It was 3.7 percent in September.

TRUMP: On the diversity visa lottery program: “They send us the people they don’t want.”

THE FACTS: A persistent falsehood. “They,” meaning other countries, do not select citizens for the U.S. program. Foreigners decide on their own to apply for it. They must meet education or skills benchmarks to apply and those who are tentatively selected through the lottery must pass background checks before being confirmed.

Trump attributed similar characteristics to migrant caravans from Central America, suggesting governments try to get rid of their bad people by putting them in caravans for the U.S. Again, migrants are self-selected, not told to march to the U.S.

TRUMP: Special counsel Robert Mueller’s investigative team has “13 of the angriest Democrats in the history of our country.”

THE FACTS: Mueller is a longtime Republican and party affiliation cuts both ways — or no way at all — in the varied background of the team. Some have donated campaign money to Democrats. The team is not known to be particularly or historically angry.

TRUMP on what he considers false reporting about his crowd sizes: “They did the same thing at our big inauguration speech. You take a look at those crowds. …We had a crowd, I’ve never seen anything like it. … There were people (from) the Capitol down to the Washington Monument.”

“They did the same thing at our big inauguration speech. You take a look at those crowds. …We had a crowd, I’ve never seen anything like it. … There were people (from) the Capitol down to the Washington Monument.” — President Donald Trump

THE FACTS: The National Park Service released dozens of photos of the crowd gathered for his inauguration ceremony and it was clear from them that crowds did not extend to the Washington Monument from the Capitol. Large swaths of empty space were visible on the National Mall.

It released the photos in response to news media requests made through the Freedom of Information Act after Trump and his aides accused news organizations of framing or timing photos and video to make it look like not many people came.

TRUMP: “Every single Democrat said Comey should be fired” for his handling of the investigation into Hillary Clinton’s emails late in the campaign. Senate Democratic leader Chuck Schumer “called for his resignation many times.”

THE FACTS: Not true. Democrats did not universally — or even broadly — call for Comey to be fired despite their anger over his decision to go public before Election Day with news that the FBI had renewed its investigation of Clinton’s handling of her emails. Several Democratic lawmakers did want him out, but they were a distinct minority.

Schumer said he had lost confidence in Comey but did not urge his removal, telling Bloomberg News he wanted to speak with the FBI chief “to restore my faith.” The House Democratic leader, Nancy Pelosi, also held off on asking for Comey to step down, while musing: “Maybe he’s not in the right job.” Trump fired him months later.

TRUMP: “No planes, no energy. …Perhaps nothing is more extreme than the Democrats’ plan to completely take over American energy, and completely destroy America’s economy through their new $100 trillion dollar Green New Deal. …It would end air travel.”

THE FACTS: He’s ignoring the actual provisions of the plan, which would not ban air travel or end traditional sources of energy. The plan, backed by some liberal Democrats but greeted cautiously or opposed by others in the party, does call for a drastic drop in greenhouse-gas emissions from fossil fuels such as oil, coal and natural gas.

Trump is extrapolating from a fact sheet that initially accompanied the plan, then was disavowed and withdrawn by its sponsors. It proposed building high-speed rail at a scale “where air travel stops becoming necessary.”

THE FACTS: Trump misstates the Electoral College vote in his 2016 presidential race against Democrat Hillary Clinton. The official count was 304 to 227, according to an Associated Press tally of the electoral votes in every state.

THE FACTS: He’s off by several hundred billion dollars on the trade deficit with China. Trump typically ignores one part of a trading relationship, services, and considers only the other part, goods. Even by that measure, he’s wrong. On goods alone, the U.S. ran a trade deficit of $382 billion with China last year, not $507 billion. That was up from nearly $376 billion in 2017.

The U.S. is strong on services and ran a $40 billion surplus with China on that form of trade in 2017. So the actual trade deficit with China that year was $335 billon.

TRUMP: “We have some great private coverage. And we have initiated some incredible plans, like the new cooperative plan, where you get better insurance than Obamacare for a fraction of the cost.”

“We have some great private coverage. And we have initiated some incredible plans, like the new cooperative plan, where you get better insurance than Obamacare for a fraction of the cost.” — President Donald Trump

THE FACTS: He’s glossing over the limitations of his administration’s expanded health care options, which involve both short term and association plans. They offer lower premiums than comprehensive plans such as those under the Affordable Care Act but cover less.

Short-term plans don’t have to take people with medical conditions or provide benefits such as coverage for maternity, mental health, prescription drugs and substance abuse treatment. Association health plans do have to accept people with pre-existing medical conditions, but they don’t have to cover the full menu of 10 “essential” kinds of benefits required by Obamacare.

Gary Claxton of the nonpartisan Kaiser Family Foundation says short-term plans may turn out to be more costly than Trump administration officials suggest. The plans now cover up to 90 days, but if insurers expand them to offer up to 36 months’ coverage, the companies will be taking on more risk. “You’ll have to pay more up front because there’s a longer time during which you could get sick,” he said.

TRUMP: “We were given no credit. I can’t go and campaign for all of the people in the House. There’s too many.”

TRUMP, on his endorsement of Florida candidate for governor, Ron DeSantis: “I said, ‘Ron, Don’t make me do this, Ron.’ ‘Sir, I can win.’ Alright, Ron, here we go. Because I know if he loses — which almost never happens when I endorse someone, almost never. Only one time, that was because it was done in the middle of the day of the election… But we very rarely lose.”

THE FACTS: Trump is wrong to suggest that almost every candidate he endorsed and campaigned for in the November midterm elections — except for perhaps one — won.

In the House, Republican Rep. Jason Lewis lost his race in Minnesota to Democrat Angie Craig, whom he had defeated by 2 percentage points in 2016. Trump endorsed Lewis and campaigned for him.

TRUMP, on the Choice program for veterans: “I got that approved after 44 years of being unable to get it approved for our veterans.”

THE FACTS: False. Congress approved the private-sector Veterans Choice health program in 2014 and President Barack Obama signed it into law. Trump is expanding it.

THE FACTS: Veterans still must wait for weeks.

While it’s true the VA recently announced plans to expand eligibility for veterans in the Veterans Choice program, it remains limited due in part to uncertain money and longer waits.

The program currently allows veterans to see doctors outside the VA system if they must wait more than 30 days for an appointment or drive more than 40 miles to a VA facility. Under new rules to take effect in June, veterans will have that option for a private doctor if their VA wait is only 20 days (28 for specialty care) or their drive is only 30 minutes.

But the expanded Choice eligibility may do little to provide immediate help.

That’s because veterans often must wait even longer for an appointment in the private sector. Last year, then-Secretary David Shulkin said VA care is “often 40 percent better in terms of wait times” compared with the private sector. In 2018, 34 percent of all VA appointments were with outside physicians, down from 36 percent in 2017.

Choice came into effect after some veterans died while waiting months for appointments at the Phoenix VA medical center.

TRUMP: “I flew to Iraq — the first time I left the White House, because I stayed at the White House for months and months because I wanted the Democrats to get back from their vacations from Hawaii and these other places.”

THE FACTS: Trump actually left the White House plenty of times during the “months and months” surrounding the partial government shutdown that began Dec. 22.

Besides his trip to Iraq and Germany on Dec. 26-27, Trump traveled to the Mexican border town of McAllen, Texas, on Jan. 10. On Jan. 14, he also went to New Orleans to address the American Farm Bureau. He’s left the White House during the five-week shutdown for meetings at Camp David and the Capitol.

Shortly before the shutdown began, he traveled to Philadelphia to watch the Army-Navy football game (Dec. 8), visited Kansas City for a law enforcement conference (Dec. 7), attended former President George H.W. Bush’s funeral at the Washington National Cathedral (Dec. 5), participated in the G-20 summit in Argentina in late November; and hosted “Make America Great Again” rallies in Mississippi with Senate candidate Cindy Hyde-Smith (Nov. 26). He hosted a dinner on Thanksgiving at his Mar-a-Lago resort in Florida.

Senate Seems to Have Votes to Reject Trump’s Wall Move