Expectations Low as Trump Looks for Win in NKorea Summit 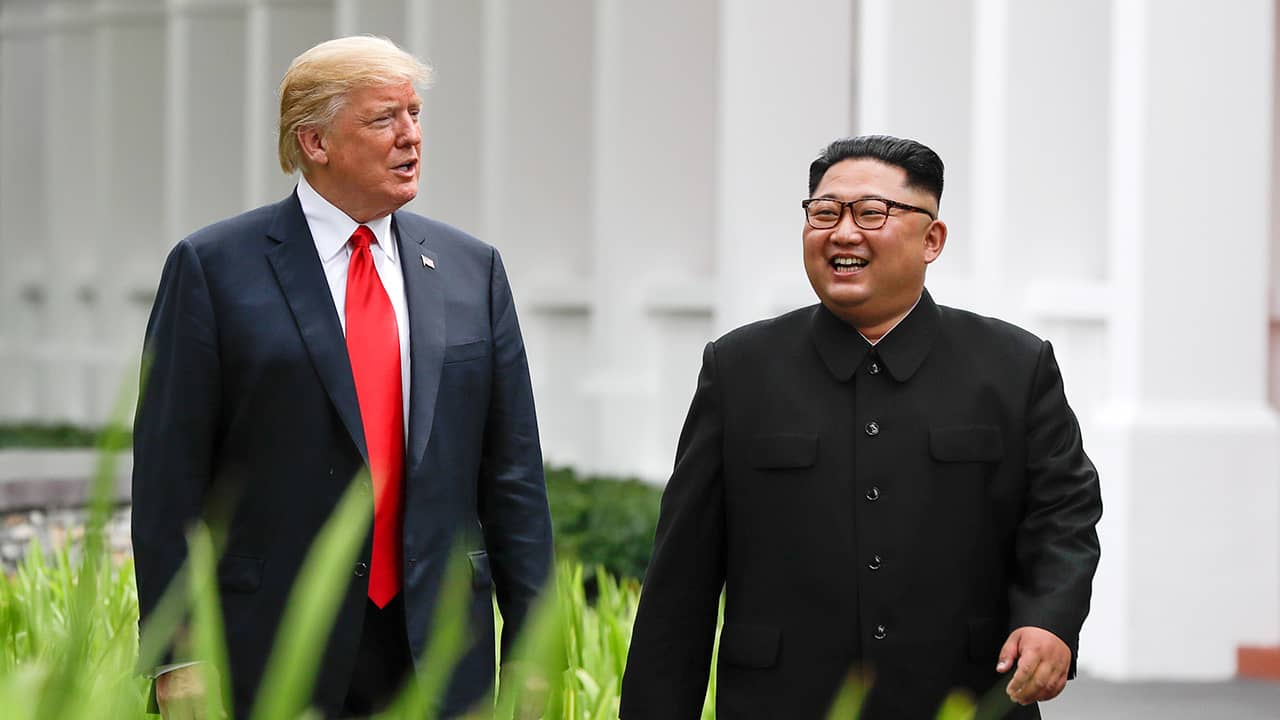 WASHINGTON — President Donald Trump will head into his second meeting with North Korea’s Kim Jong Un having reframed what would make a successful summit, lowering expectations for Pyongyang’s denuclearization while eager to declare a flashy victory to offset the political turmoil he faces at home.

Though worries abound across world capitals about what Trump might be willing to give up in the name of a win, the president was ready to write himself into the history books before he and Kim even shake hands in Hanoi.
“If I were not elected president, you would have been in a war with North Korea,” Trump said last week. “We now have a situation where the relationships are good — where there has been no nuclear testing, no missiles, no rockets.”


“If I were not elected president, you would have been in a war with North Korea. We now have a situation where the relationships are good — where there has been no nuclear testing, no missiles, no rockets.” — President Donald Trump
Whatever the North Koreans have done so far, the survival of the Kim regime is always the primary concern.
Kim inherited a nascent, incomplete nuclear program from his father, and after years of accelerated effort and fighting through crippling sanctions, he built an arsenal that demonstrates the potential capability to deliver a thermonuclear weapon to the mainland United States. That is the fundamental reason Washington now sits at the negotiating table.
Kim, his world standing elevated after receiving an audience with a U.S. president, has yet to show a convincing sign that he is willing to deal away an arsenal that might provide a stronger guarantee of survival than whatever security assurance the United States could provide. The North Koreans have largely eschewed staff-level talks, pushing for discussions between Trump and Kim.
Trump will arrive in Hanoi on Tuesday on Air Force One while his counterpart, lacking a modern aircraft fleet, travels via armored train. Though details of the summit remain closely held, the two leaders are expected to meet at some point one-on-one, joined only by translators.

The easing of tension between the two nations, Trump and his allies believe, stems from the U.S. president’s own unorthodox and unpredictable style of diplomacy. Often prizing personal rapport over long-held strategic interests, Trump has pointed to his budding relationship with the young and reclusive leader, frequently showing visitors to the Oval Office his flattering letters from Kim.
Trump, who has long declared that North Korea represented the gravest foreign threat of his presidency, told reporters recently that his efforts to defang Pyongyang had moved Japanese Prime Minister Shinzo Abe to nominate him for a Nobel Peace Prize, something Abe would not confirm or deny. And, always with an eye on his media coverage, Trump had delighted in the round-the-clock phenomenon created by the first Kim summit, held last June in Singapore. He urged reluctant aides as early as last fall to begin preparations for a second meeting.
The images of the first face-to-face meeting between a U.S. president and his North Korean counterpart resonated across the globe. Four main goals emerged: establishing new relations between the nations, building a new peace on the Korean Peninsula, completing denuclearization of the peninsula and recovering U.S. POW/MIA remains from the Korean War.
While some remains have been returned to the United States, little has been achieved on the other points. Korean and American negotiators have not settled on either the parameters of denuclearization or the timetable for the removal of both Korean weapons and American sanctions.

Denuclearization of the Korean Peninsula

“The key lessons of Singapore are that President Trump sees tremendous value in the imagery of diplomacy and wants to be seen as a bold leader, even if the substance of the diplomacy is far behind the pageantry,” said Abraham Denmark, director of the Asia Program at the Woodrow Wilson International Center for Scholars.
U.S. intelligence officials testified before Congress last month that it remains unlikely Kim would fully dismantle his arsenal. And many voices in the Trump administration, including national security adviser John Bolton, have expressed skepticism that North Korea would ever live up to a deal.

Mark Chinoy, senior fellow at U.S.-China Institute at the University of Southern California, made clear that after generations of hostility, the convivial atmosphere of Singapore “can’t be discounted.” But Chinoy noted that Trump had agreed to North Korean’s “formulation of ‘denuclearization of the Korean peninsula,’ which Pyongyang has long made clear meant an end to the US security alliance with South Korea and an end to the US nuclear umbrella intended to defend South Korea and Japan.”

After the last summit, Trump unilaterally suspended some military drills with South Korea, alarming some in Seoul and at the Pentagon. But he was insistent this week that he would not drawdown U.S. troops from South Korea. And American officials, even as they hint at a relaxed timetable for Pyongyang to account for its full arsenal, have continued to publicly insist they would not ease punishing sanctions on North Korea until denuclearization is complete.

The President Is Looking for a Win

The Hanoi summit comes at a politically perilous time for Trump.
His potential 2020 foes have begun unleashing their attacks. The newly elected Democratic House has begun its onslaught of investigations into the president, calling his former fixer, Michael Cohen, to appear before Congress while the president is in Vietnam. And special counsel Robert Mueller, who has investigated possible ties between Trump’s campaign Russian election interference, may finalize his report within days of the president’s return to the United States.
Trump may be eager to change the subject and some foreign policy experts fear that could prompt the president to make a significant concession or strike an attention-grabbing deal — such as a declaration to formally end the Korean War, which has been suspended in an armistice since 1953 — without extracting much in return from Kim. North Korea’s long history of human rights abuses is also unlikely to be on the agenda.
“Clearly, the president is looking for a win,” said Denmark. “The North Koreans know this and will likely expect President Trump to be looking to make an agreement with limited regard for its content.”