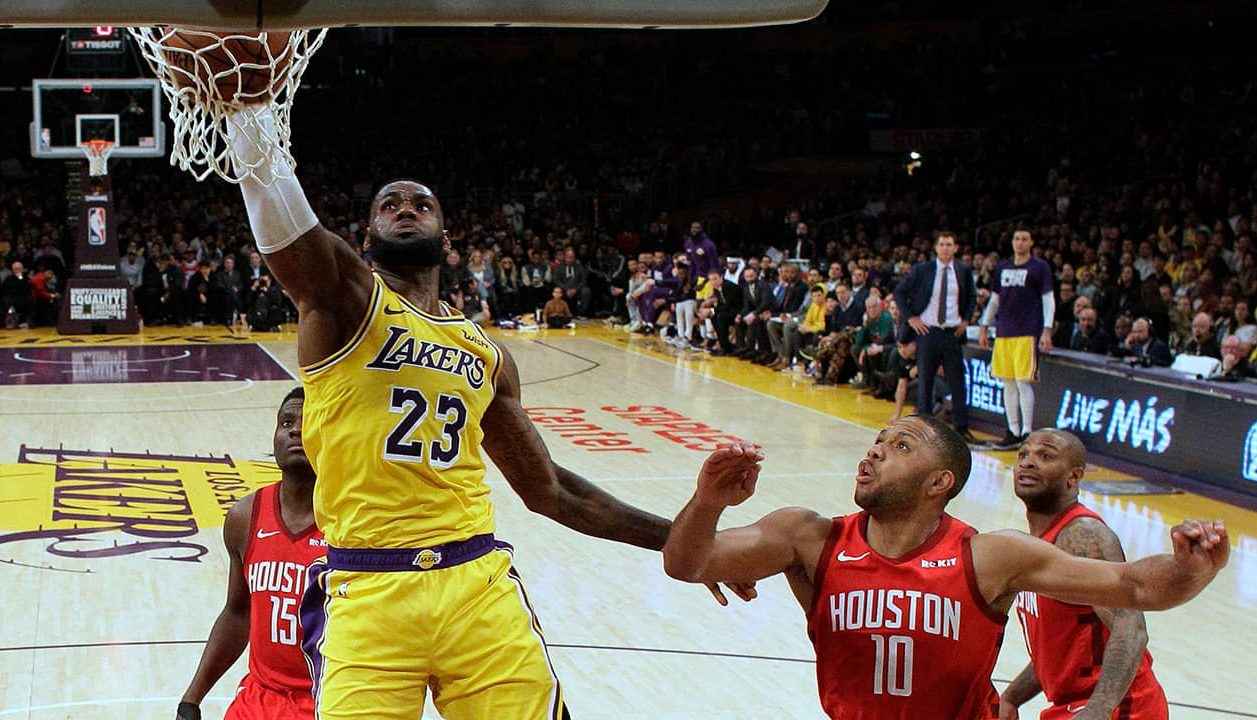 LOS ANGELES — LeBron James knows that he needs to turn up his intensity if the Los Angeles Lakers are going to make the playoffs. He certainly did that on Thursday night against the Houston Rockets when his team needed it the most.
James scored 16 of his 29 points in the second half as the Lakers rallied from a 19-point deficit midway through the third quarter to defeat the Rockets 111-106.

“It looked like we got our defensive mojo, our defensive confidence, back as the game went along,” Lakers coach Luke Walton said. “We had to get to different match-ups but we kept scrapping a found a way to give ourselves a chance.”
Brandon Ingram had 27 points — including 11 of 14 from the foul line — and 13 rebounds. Kyle Kuzma added 18 points.


“It comes down to where LeBron makes big shots and we didn’t. We probably ran a little bit out of gas. It was a lot of little factors.” — Houston coach Mike D’Antoni
James Harden led Houston with 30 points, 10 rebounds and nine assists before fouling out with 1:24 remaining. It is his 32nd consecutive game where he has scored 30 or more points, overtaking Wilt Chamberlain for the second-longest streak in NBA history. Chamberlain also holds the record at 65 games.
“It’s a few things like it has been throughout the entire season,” said Harden on not sustaining a large lead. “Sooner or later, you have to be able to correct them.”
Paul, who had 23 points and 10 rebounds before also fouling out, was an assist shy of a triple double.


Related Story: LeBron James’ Move to Lakers Could Cost Him $20 Million in Taxes

“It comes down to where LeBron makes big shots and we didn’t,” Houston coach Mike D’Antoni said. “We probably ran a little bit out of gas. It was a lot of little factors.”
Houston led 32-22 at the end of the first quarter when it ended the period with eight straight points, including back-to-back 3-pointers by Faried and Austin Rivers.
Harden’s jumper gave the Rockets a 52-39 advantage with 4:20 remaining before the Lakers went on an 9-0 run. The Rockets would lead 58-52 at halftime.

The Lakers evened their record at 28-28 but remain in 10th place in the Western Conference and 2½ games behind the Clippers for the final playoff spot. Their next three games are against teams with losing records and they face the Clippers twice down the stretch.
Walton said he has seen a more intense James since the Lakers returned from the All-Star break.
“He’s had a more serious look to his face,” Walton said. “He recognizes where we are at and the sense of urgency. He was huge tonight but he’s always great.”

Houston center Clint Capela returned to the lineup for the first time since Jan. 13 and had a double-double. Capela — who had 12 points and 10 rebounds — suffered a right thumb injury against Orlando and missed 15 games.

Rockets: Eric Gordon scored 14 points and Kenneth Faried 13. … It is only the fifth loss for Houston in 33 games when it has led after three quarters.
Lakers: Reggie Bullock scored 14 points. … G Mike Muscala missed the game due to a sprained right ankle.