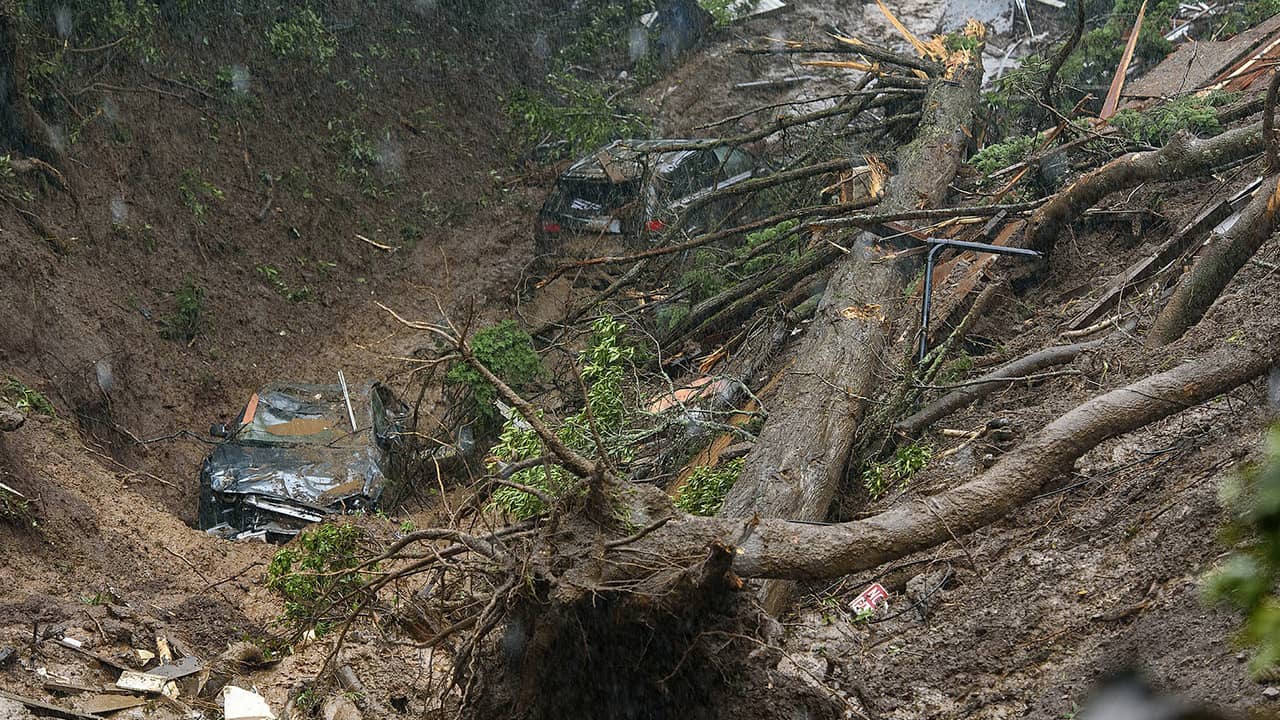 SAUSALITO — Waves of heavy rain pounded California on Thursday, trapping people in floodwaters, washing away a mountain highway, triggering a mudslide that destroyed homes and forcing residents to flee communities scorched by wildfires last year.
At least two people died as the powerful system swept in from the Pacific Ocean and unleashed damaging rain, snow and wind.
The system was moving across the U.S. West into Wyoming and Colorado after walloping Northern California and southern Oregon a day earlier.
The National Weather Service reported staggering rainfall amounts across California, including more than 9.4 inches over 48 hours at one location in the San Bernardino Mountains east of Los Angeles.
A woman pulled from rising water in a low-lying area between those mountains and LA had a heart attack and died at a hospital, said Capt. Ryan Rolston with the Corona Fire Department. The unidentified woman was one of nine people and three dogs rescued in a flood control channel where homeless people camp, Rolston said.
In Escondido, northeast of San Diego, firefighters pulled the body of a man from a concrete-lined waterway. Witnesses told authorities the man had been paddle-boarding in the surging waters.
North of San Francisco, a mudslide barreled over cars, uprooted trees and sent a home sliding down a hill and smashing into another house in Sausalito.

A woman was rescued from the splintered wreckage with only cuts and bruises. Susan Gordon was buried under a tree and mud for two hours while crews dug her out, her son wrote on an online fundraising page.
Chris Parkman said it’s been years since a storm so powerful has hit the hillside community, where at least 50 properties were evacuated. Firefighter/paramedic Patrick Young with the Southern Marin Fire Department looks out over the aftermath of a mudslide that destroyed three homes on a hillside in Sausalito, Calif., Thursday, Feb. 14, 2019. The National Weather Service says the atmospheric river sagged southward from Northern California overnight and is pointed at the southwestern corner of the state early Thursday. (AP Photo/Michael Short)

San Francisco Saw More Than 1.75 Inches of Rain Over 24 Hours

Weather was so severe that the Hollywood Walk of Fame had to postpone the dedication of a sidewalk star honoring the band Aerosmith. Knott’s Berry Farm and Six Flags Magic Mountain theme parks closed.
Trouble also persisted in saturated Northern California, where thousands of people lost power and flooding was possible. Downtown San Francisco saw more than 1.75 inches of rain over 24 hours.
A flooded creek led authorities to urge about 300 residents to leave a community some 20 miles west of Paradise, a town destroyed last year by the nation’s deadliest wildfire in a century.
The storm followed more than a week of severe weather in the Pacific Northwest and was the latest in a series of storms that has all but eliminated drought-level dryness in California this winter. It’s fueled by an atmospheric river — a plume of moisture stretching across the Pacific Ocean nearly to Hawaii.

Nearly 37 percent of California had no level of drought or abnormal dryness, the U.S. Drought Monitor reported Thursday. About 10.5 percent of the state was in moderate drought, just over 1.6 percent was in severe drought. The remainder was in the abnormally dry category. The numbers reflect data gathered up to Tuesday.
Atmospheric rivers are long bands of water vapor that form over an ocean and flow through the sky. Formed by winds associated with storms, they occur globally but are especially significant on the West Coast.

Even before the height of the storm, mandatory evacuations were ordered near the wildfire area in the Santa Ana Mountains where officials said there was a high risk of debris flows.