Heavy Duty: Detroit 3 All Roll Out Biggest Pickups This Year 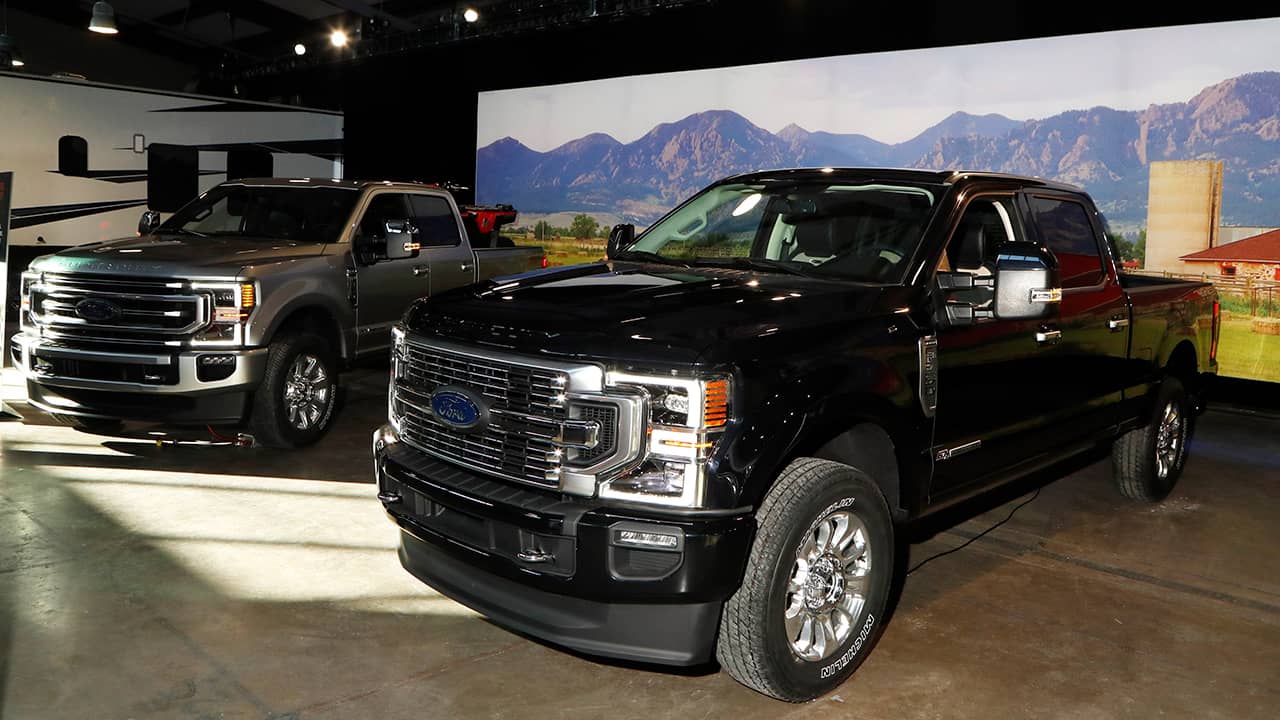 DETROIT — Nicole Foster-Beck asks a lot of the heavy-duty pickup truck she uses on her 43-acre horse farm east of Dallas.
Aside from the daily hauling, her 2015 GMC Sierra has to be powerful enough to pull a heavy eight-horse trailer to competitions, yet cushy enough to keep people comfortable on trips as far away as Kentucky.


“Capability is really important for these folks. They’re often times towing something that’s even more valuable than the truck itself. It enables what their lifestyle is.” — Sandor Piszar, truck marketing manager for General Motors’ Chevrolet
She’s exactly the customer that all three Detroit automakers will be courting this year when they roll out new or substantially updated heavy-duty versions of their trucks. It’s the first time that all three are revamping their heavy-duty trucks at the same time in years, which almost certainly will touch off a battle of ads and specifications.
Pickups from the Detroit automakers were the three top-selling vehicles in the U.S. last year, totaling more than 2 million in sales. Heavy-duty versions, with bigger frames, beds, interiors and engines, make up about 30 percent of that. They’re for those who need to tow and haul big things. Most buyers pull trailers with heavy items including boats, horses and recreational campers that can weigh around 10 tons. Many are used to pull trailers laden with equipment to job sites.


Related Story: Here's How the Ford F-150 Became the King of Cars

“Capability is really important for these folks,” said Sandor Piszar, truck marketing manager for General Motors’ Chevrolet brand. “They’re often times towing something that’s even more valuable than the truck itself. It enables what their lifestyle is.”
There’s a lot at stake for the automakers, who get most of their profits from trucks. Around 90 percent of heavy-duty buyers spend thousands extra for powerful diesel engines, and many go for pricey luxury and safety features, paying as much as $80,000 for a fully decked-out truck.
They also do their homework.

Electronics to Help With Towing, Backing and Viewing Surrounding Traffic

“Hauling a horse is not just like hauling around hay,” said Foster-Beck, who trains show horses at Foster Farm 20 minutes from downtown Dallas. “Your ability to accelerate when you need to, your ability to brake gently. Those things really matter.”
All three companies are offering cameras and other electronics to help with towing, backing and viewing surrounding traffic, features that also are important to heavy-duty buyers.


“Hauling a horse is not just like hauling around hay. Your ability to accelerate when you need to, your ability to brake gently. Those things really matter.” — Nicole Foster-Beck
Fiat Chrysler’s Ram brand started this year’s contest, unveiling a new heavy-duty pickup in January. The 2019 Ram, which goes on sale in April, has an optional 400-horsepower, 6.7-liter six-cylinder diesel with 1,000 pound-feet of torque. The company says it can pull more than 35,000 pounds and carry 7,680 pounds in its bed. Torque, a measure of rotational force, is a big deal for buyers because it’s needed especially when pulling trailers up big hills.
General Motors’ GMC brand was next with the heavy-duty Sierra. Its 6.6-liter diesel has 445 horsepower and 910 pound feet of torque. Towing and payload capacities haven’t been released yet, but Phil Brook, GMC’s vice president of marketing, says the truck can tow more than 30,000 pounds.
Ford is unveiling a new Super Duty version of the F-Series Tuesday and putting it on display at the Chicago auto show. It didn’t release power numbers either but said the new truck, due out in the fall, will offer the company’s highest-ever towing and payload ratings. Ford also added a larger 7.3-liter V8 gasoline engine to its lineup, joining a smaller V8 and a 6.7-liter diesel. The larger gasoline V8 gives people more towing ability at a cost lower than a diesel, said Todd Eckert, Ford’s truck marketing manager.
Also Tuesday, Chevrolet will introduce its new Silverado heavy-duty truck, which is nearly the same as a Sierra but a little less posh. The Silverado comes out in the middle of the year and the Sierra in late summer.
Prices haven’t been announced for any of the trucks.
Related Topics:AutomakersDetroitGMChaulingheavy-dutyPickupstowingTrucks
Up Next